Also known as water bears, the creatures are a group of microscopic invertebrates that are best known for their ability to survive extreme conditions.

Due to their microscopic size and non-biomineralising body, the chance of them becoming fossilised is small.

In the new paper, researchers describe a modern-looking tardigrade fossil that represents a new genus and new species.

They were able to obtain higher resolution images of important anatomical characteristics that helped them to analyse the fossil.

Researchers say the new fossil, Paradoryphoribius chronocaribbeus, is only the third tardigrade amber fossil to be fully described and formally named to date.

The other two fully described modern-looking tardigrade fossils are Milnesium swolenskyi and Beorn leggi, both known from Cretaceous-age amber in North America. 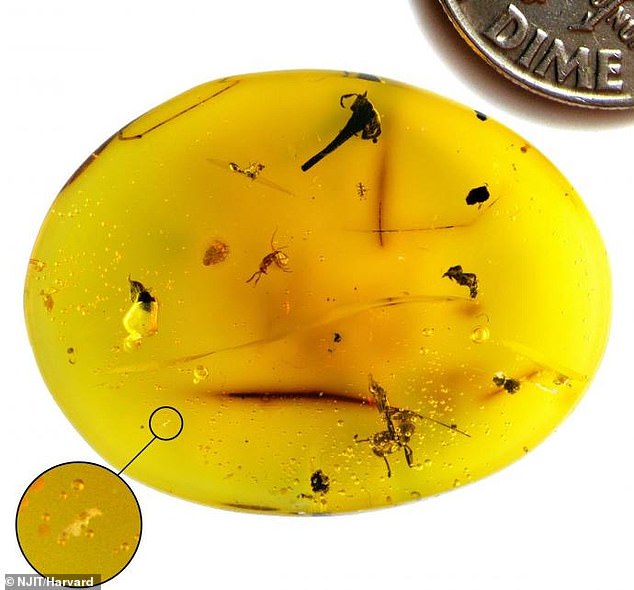 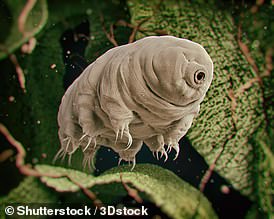 Tardigrades, also known as water bears, are said to be the most indestructible animals in the world

On a 2007 trip to space, tardigrades were exposed to the space vacuum and harmful solar radiation, but still managed to survive and reproduce after returning to Earth.

The tiny eight-legged animals are found on all the continents and in different environments including marine, freshwater, and terrestrial.

While they have survived all five Phanerozoic Great Mass Extinction events, the earliest modern-looking tardigrades are only known from the Cretaceous period – around 80 million years ago.

Despite their long evolutionary history and global distribution, there is a lot lacking in their fossil record.

Paradoryphoribius is the first fossil to be found embedded in Miocene (approximately 16 million years ago) Dominican amber and the first fossil representative of the tardigrade superfamily Isohypsibioidea.

Lead author Marc Mapalo, from the department of organismic and evolutionary biology, Harvard University, said: ‘The difficulty of working with this amber specimen is that it’s far too small for dissecting microscopes, we needed a special microscope to fully see the fossil.’

Researchers say the new tardigrade has a total body length of only 559 micrometres – or slightly over half a millimetre.

At such a small scale, a dissecting microscope can only reveal the external morphology of the fossil.

Fortunately, Tardigrade’s cuticle is made of chitin, a fibrous glucose substance that is a primary component of cell walls in fungi and the exoskeletons of some other invertebrates.

Chitin is fluorescent and easily excited by lasers, making it possible to fully visualise the tardigrade fossil using a specific method.

The use of confocal laser microscopy instead of transmitted light to study the fossil created degrees of fluorescence allowing a more clear view of the internal morphology.

This method allowed researchers to visualise two very important characters of the fossil – the claws and the buccal apparatus, or the foregut of the animal which is also made of cuticle.

‘With our new study, the full tally includes only four specimens, from which only three are formally described and named, including Paradoryphoribius.

‘This paper basically encompasses a third of the tardigrade fossil record known to date.

‘Furthermore, Paradoryphoribius offers the only data on a tardigrade buccal apparatus in their entire fossil record.’

The authors note there is a strong preservation bias for tardigrade fossils in amber due to their small size and habitat preferences.

Therefore amber deposits provide the most reliable source for finding new tardigrade fossils, even though that does not mean finding them is an easy task.

The findings are published in Proceedings of the Royal Society B.