Home » NFTs Linked to Nobel Prizes Are Being Auctioned by Berkeley

How much will someone be willing to pay for a few pages of quarter-century-old bureaucratic university paperwork that have been turned into a blockchain-encoded piece of digital art?

The University of California, Berkeley, hopes quite a bit, and it is about to find out.

Berkeley announced on Thursday that it will auction the first of two digital art pieces known as nonfungible tokens, or NFTs, next week. The object being offered is based on a document called an invention and technology disclosure. That’s the form that researchers at Berkeley fill out to alert the university about discoveries that have potential to be turned into lucrative patents.

The title of the invention, from 1996, is “Blockade of T-Lymphocyte Down-Regulation Associated with CTLA-4 Signalling.”

The university hopes that potential bidders will be attracted to an early description of a revolutionary approach to treating cancer developed by James P. Allison, then a professor at Berkeley. He found a way to turn off the immune system’s aversion to attacking tumors and he showed that it worked in mice.

That advance eventually led to the creation of Yervoy, a drug for the treatment of metastatic melanoma, and Dr. Allison, who is now at the MD Anderson Cancer Center at the University of Texas, shared the Nobel Prize in Medicine in 2018.

Thus, the Berkeley disclosure form could be thought of as the scientific equivalent of Mickey Mantle’s rookie baseball card — a memento of the beginnings of greatness.

“I think of it almost as a history of science artifact,” said Richard K. Lyons, the chief innovation and entrepreneurship officer at Berkeley. “Imagine somebody saying, ‘I want to own the NFTs for the 10 most important scientific discoveries of my lifetime.’”

A 24-hour auction of the NFT of Dr. Allison’s invention disclosure will take place as early as June 2 using Foundation, an NFT auction marketplace that uses Ethereum, the cryptocurrency network of choice for NFT collectors.

Because the making of an NFT requires a lot of computing power, part of the money the university earns from the NFT sale will be used for carbon offsets to compensate for the energy consumed, Berkeley officials said. 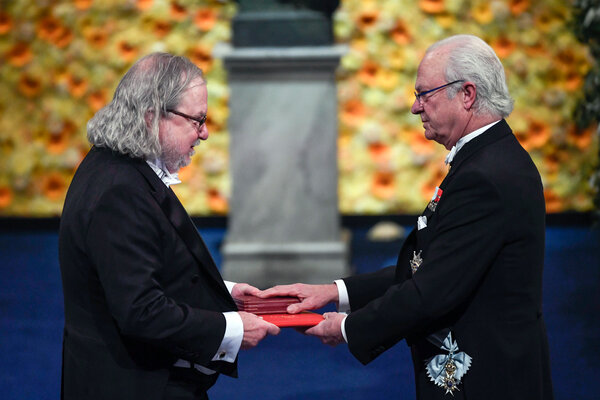 The second NFT that Berkeley plans to auction in the coming weeks will be the disclosure form describing the CRISPR-Cas9 gene editing invention by Jennifer A. Doudna, a professor of molecular and cell biology at Berkeley. She shared the 2020 Nobel Prize in Chemistry with Emmanuelle Charpentier of the Max Planck Unit for the Science of Pathogens for their work on the technique.

NFTs have become trendy collectibles in recent months. A unique code embedded in a digital image or video serves as a record of its authenticity and is stored on a blockchain, the same technology that underlies digital currencies like Bitcoin. NFTs can then be bought and sold, just like baseball cards, and the blockchain ensures they cannot be deleted or counterfeited.

A dizzying array of documents, far beyond traditional works of art, have been sold as NFTs. Jack Dorsey, the founder of Twitter, sold an NFT of his first tweet for $2.9 million. Kevin Roose, a New York Times columnist, sold an NFT of his article about NFTs for more than half a million dollars. (The money went to The Times’s Neediest Cases Fund.)

The pages of Dr. Allison’s disclosure form, drawn from the Berkeley archives, make for mostly dry reading. There is a July 11, 1995, letter from Carol Mimura, a licensing associate at Berkeley, thanking Dr. Allison for contacting the university’s office of technology licensing and asking him to fill out some forms. Another page includes Berkeley’s patent policy.

A fax from Dr. Allison to Dr. Mimura includes a simple chart with three lines and 21 data points. “Carol — This is the data that has got us excited,” Dr. Allison has scribbled.

His research group was experimenting with colon cancer in mice, and blocking CTLA-4 — a protein receptor that acts as an on-off switch for the immune system — “led to the rejection of the tumor in 5/5 mice,” Dr. Allison wrote.

Until now, these forms, filed away, unseen, have had no value, Dr. Allison concedes.

“That very first exposure to the world is sort of like, ‘This is the invention disclosure,’” he said. “But once they’ve served that purpose, historically, they get no attention.”

The NFT idea was the brainchild of Michael Alvarez Cohen, director of innovation ecosystem development in Berkeley’s intellectual property office. He said part of the idea came after the publication of “The Code Breaker” by Walter Isaacson, a biography of Dr. Doudna. His friends and relatives told him that they had not known that much of the gene editing technology had originated at Berkeley.

“So I was kind of like, Maybe we should post excerpts from the invention disclosure to help promote this,” he said.

At the same time, he was following news about blockchain and NFTs.

“Then about a month ago, I put the two together,” Mr. Cohen said. Take the invention disclosures about Nobel-winning research like CRISPR, turn them into NFTs, “and drive awareness and also fund research by auctioning the NFTs.”

He sat on the idea for a while.

“I come up with a lot of ideas,” Mr. Cohen said. “Some of them are bone-headed and everything.”

Just over two weeks ago, he started discussing it with his colleagues, and quickly a plan fell into place. In addition to CRISPR, they decided to highlight Dr. Allison’s work.

The Allison NFT is more than a simple digital document. “It’s a combination of a lab notebook and digital art,” Mr. Cohen said. A single image includes 10 pages but one can zoom in and read the documents. “I really wanted to preserve the ability to read the history in addition to viewing the beauty of the image,” he said.

The designers of the NFT also included subtle nods to the initial resistance to Dr. Allison’s ideas. The pages are all slightly tilted, because “people looked at him askew,” Mr. Cohen said. “There’s a lot of little things like that in the art.”

Dr. Lyons was reluctant to predict how much the artwork would fetch at auction. “I’d be surprised if it went for less than $100,000,” he said. “It could go into seven figures. This is a new category, and it’s hard to price anything that is a new category.”