Home » Science » One in 14 dogs in the UK is now obese, study finds

Talk about puppy fat! One in 14 dogs is OBESE – with pugs, beagles, golden retrievers and English springer spaniels at highest risk of piling on the pounds, vets warn

From a sample of more than 20,000 dogs, pugs, beagles and golden retrievers were the breeds at greatest risk of obesity compared with crossbreeds, the study found.

Owners of these breeds must be ‘especially vigilant’ to protect their dogs from piling on weight, RVC says, by avoiding excessive treats and giving them lots of exercise. 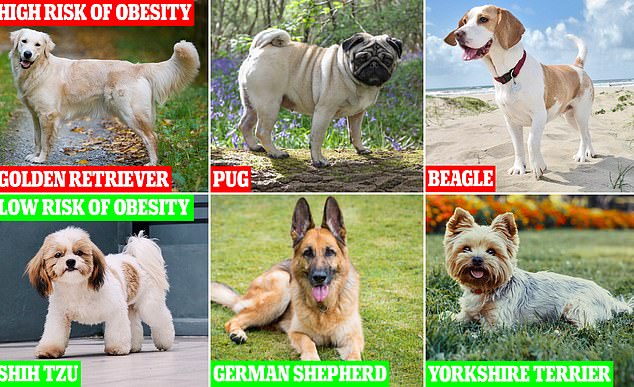 The three breeds at highest risk of obesity are pug, beagle and golden retriever (top) while the lowest risk breeds are shih tzu, German shepherd and Yorkshire terrier (bottom)

Going from high to low risk of being overweight/obese:

The study was led by the Veterinary Companion Animal Surveillance System (VetCompass) – RVC’s research project that aims to investigate the range and frequency of health problems in pets.

It is one of the largest ever studies that uses anonymised health records of veterinary surgeries to explore the canine obesity, it says.

The study included 22,333 dogs under primary veterinary care during 2016 in the UK, whose health was followed for a year, 1,580 of which were recorded as ‘overweight’ or ‘obese’ – two terms that are interchangeable in dogs, according to the researchers.

‘This study has used the power of big data to robustly address the risk factors for obesity in dogs,’ said study author Camilla Pegram, epidemiologist at the RVC.

‘Whilst veterinary professionals and owners should focus efforts on obesity prevention strategies in all dogs, those identified at high-risk, such as pugs, beagles and golden retrievers, may need a more targeted approach.’

Crossbreeds were the largest group in the study and were so used as the baseline (the point of comparison for the pure breeds), although they were not at lowest risk, as Pegram explains.

‘In the analysis we needed to choose an appropriate comparator group,’ she told MailOnline.

‘This is usually either the largest group or in some instances may be the most common purebred in the population.

‘The most common purebred in this study was the Labrador Retriever – however, we didn’t want to use the Labrador as the comparator as they are known to be at risk of obesity. 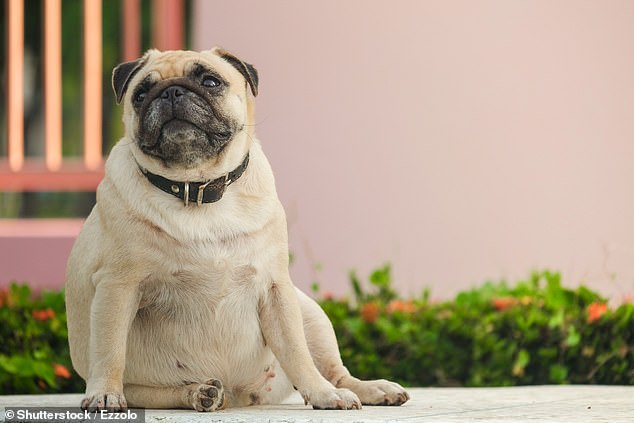 There is currently no universally‐accepted definition of obesity in dogs, with the terms ‘overweight’ and ‘obesity’ often used interchangeably.

This is different from humans, who are classed as underweight, healthy, overweight or obese based on their body mass index (BMI).

However, there is little evidence for the nature of an ‘optimal’ bodyweight nor for the cut‐off at which weight gain becomes problematic.

‘So instead we went for the largest group (crossbreeds) as the baseline.

As well as the difference between breeds, being neutered and middle-aged were other factors associated with increased chances of being overweight.

Dog owners should therefore discuss changes to diet and exercise plans with their vet before they neuter their dog, RVC says.

And neutered males had the highest risk of being overweight – 1.90 compared with all the females.

All males had 1.23 times higher risk than all females, although the difference between male neutered and female neutered when compared to all females as a baseline was about the same.

According to RVC, their study provides much needed evidence for veterinarians and owners to identify and protect dogs most at-risk.

Understanding which dogs are most at risk allows targeted weight control programmes in high risk dogs to either prevent or treat obesity.

‘Where breed increases risk of a problem, it means genes are likely to be at least in part to blame and our previous work suggests that genetics drives a high appetite in some breeds,’ said study author Dr Eleanor Raffan at the University of Cambridge.

‘The bad news is that owners of food-obsessed dogs have to work much harder to keep their dogs at a healthy weight – the good news is that it can be done.’

The study has been published in the Journal of Small Animal Practice.

Overweight people are more than twice as likely to have overweight dogs, a 2019 study found.

The team of Danish study authors said this is at least partly because they are guilty of feeding their pets fattening treats.

Writing in their study the authors claim this  lends credence to the saying ‘like owner, like dog’.

‘The prevalence of heavy or obese dogs is more than twice as large among overweight or obese owners (35 per cent) than among owners who are slim or of a normal weight (14 per cent),’ the researchers from the University of Copenhagen said.

Of the 268 dogs studied, 20 per cent were found to be overweight.

The study’s main author, Charlotte Bjornvad, said: ‘For example, when a person is relaxing on the couch and shares the last bites of a sandwich or a cookie with their dog.’

The University of Copenhagen study also showed that castration tripled the risk of being heavy or obese.

‘Castration seems to decrease the ability to regulate the appetite in male dogs and at the same time, it might also decrease the incentive to exercise which results in an increased risk of becoming overweight,’ Professor Bjornvad said.

Separate research published earlier this year found pet dogs who are overweight from too many treats could see their lives shortened by more than two years, a study has found.

Researchers tracked more than 50,000 dogs from the 12 most popular breeds over two decades to see how their weight affected their health.

They found every breed, from shih tzus to golden retrievers, had shorter lives.