A long-dormant volcano that erupted about 25 miles from Reykjavik has continued to draw large crowds this week. 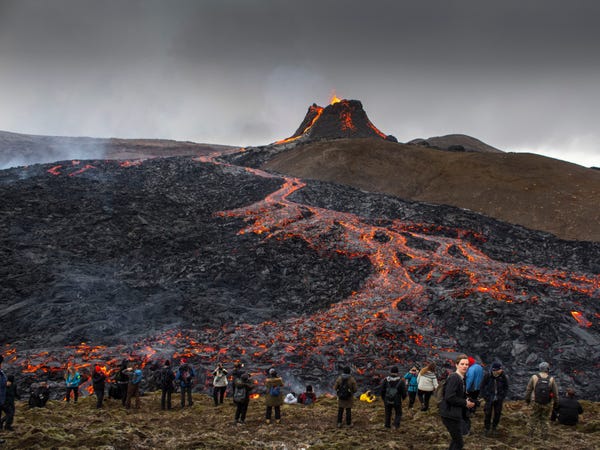 The volcano is located on the Reykjanes Peninsula, near Iceland’s capital city.

The area hasn’t seen a volcanic eruption in nearly 800 years, according to the Associated Press.

Lava first began to flow from the volcano Friday night, after tens of thousands of earthquakes were recorded in the area in recent weeks. 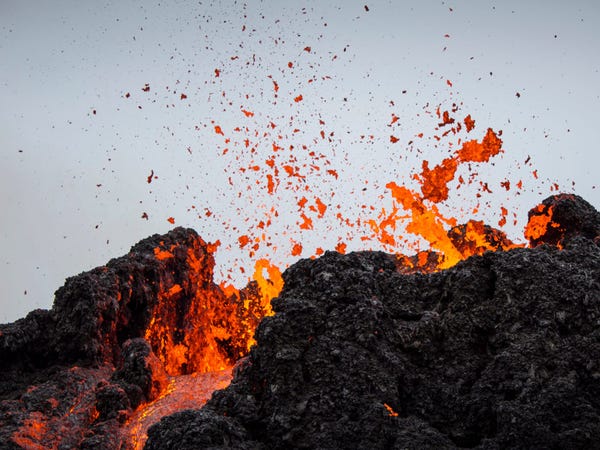 An increase in seismic activity is often a precursor to an impending eruption, Insider’s Joshua Zitser reported earlier this week.

The eruption is known as an effusive eruption, which is when magma rises through the surface and lava slowly flows out of the volcano's fissures. 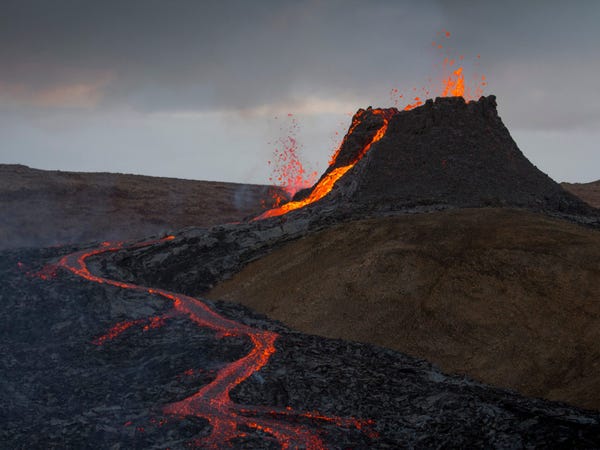 Effusive eruptions are different from explosive eruptions, which see magma torn apart as it rises to the surface, often sending up clouds of ash and disrupting air travel.

This weekend’s eruption has not affected air travel or led to any reported injuries.

The eruption is not seen as a threat to towns nearby, according to the AP, and the steady flow of lava means people can get fairly close to the volcano without much risk — a move more and more visitors have been taking in recent days.

Police told residents living nearby to close their windows and stay indoors on Saturday, according to Al Jazeera. But that didn't stop dozens of weekend hikers from taking in the sight. 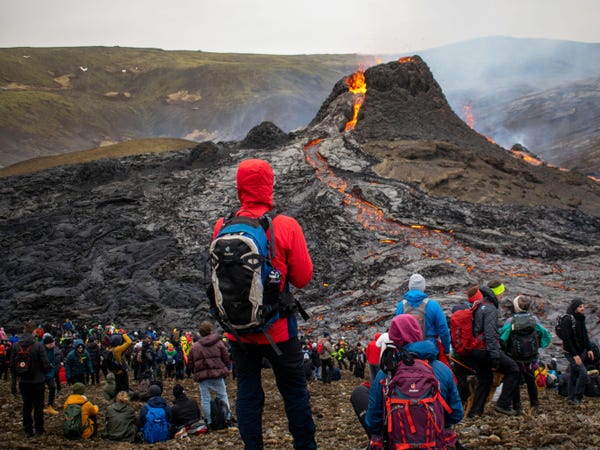 According to the AP, Iceland’s civil protection officials were seen motioning some visitors away from the lava on Tuesday to make sure nobody got hurt.

One of the officials told the outlet a person had tried to cook eggs and bacon on the lava but lava melted the pan. 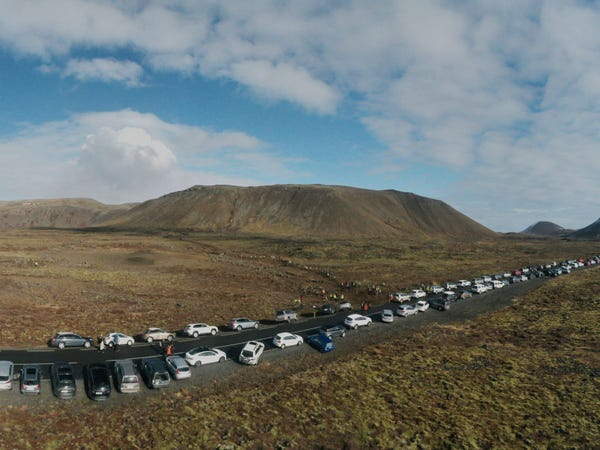 The eruption sent a red shimmer into the Icelandic sky Saturday night. 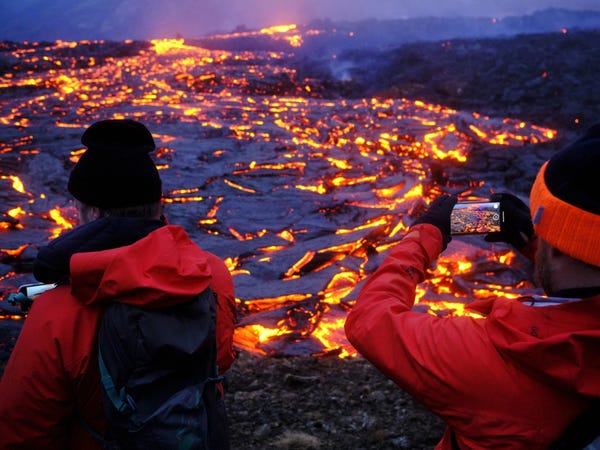 According to the AP, the glow of the lava could be seen nearly 20 miles away from the outskirts of Reykjavik.

The striking red glimmer could be seen rising behind the President of Iceland's official residence in Reykjavik. 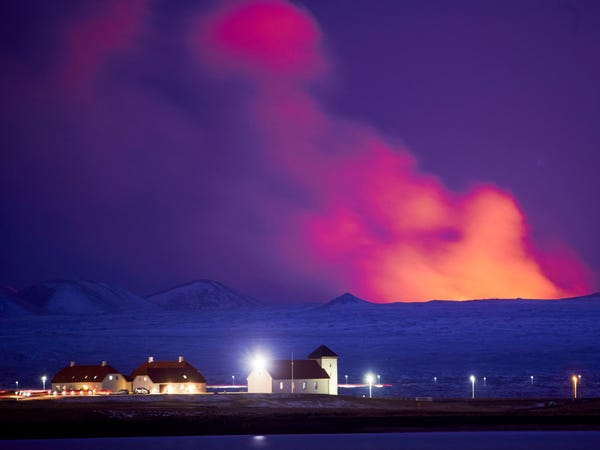 Those who got an up-close view of the flowing lava were amazed. 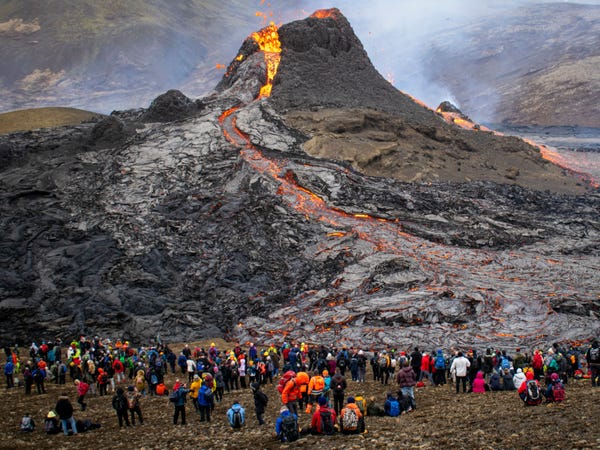 “I’ve been waiting for many years to see an eruption in Iceland,” Italian photographer Vincenzo Mazza told the AP. “I saw some eruptions in Italy, like Etna and Stromboli, but this is absolutely different.”

The end of the weekend didn't deter visitors from streaming in to witness the natural beauty Monday and Tuesday. 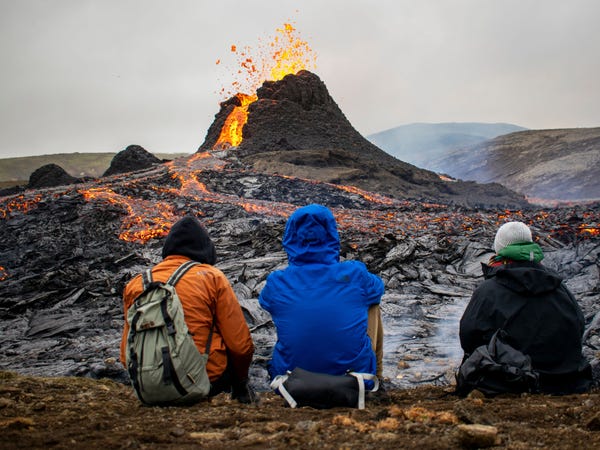