A drug that works like a ‘poison arrow’ could transform the treatment of men who have the deadliest prostate cancers.

The two-in-one treatment wiped out lethal tumours in lab tests, and trials will start on British men within weeks.

Prostate cancer is the most common cancer in men, with 52,300 cases a year. It is also the second biggest cancer killer in men, leading to more than 12,000 deaths annually, and there is an urgent need for new ways of tackling it.

The new treatment consists of an antibody – the ‘arrow’ – armed with a chemotherapy drug, the ‘poison’. 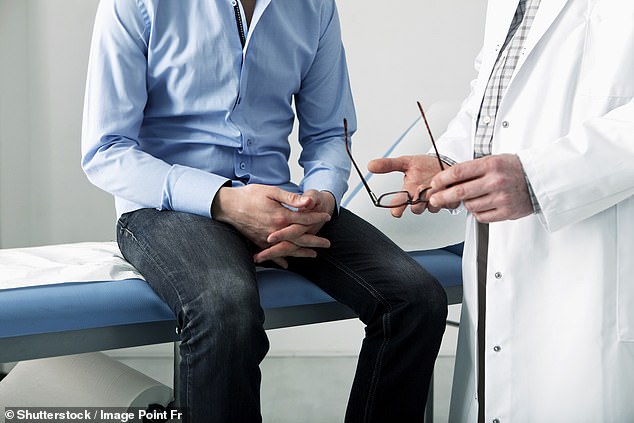 The two-in-one treatment wiped out lethal tumours in lab tests, and trials will start on British men within weeks

The antibody zeroes in on a protein called B7-H3, sparing healthy cells from damage and reducing the risk of side-effects.

The protein is present in ‘sky-high’ levels in the deadliest tumours, tests on samples taken from 98 British men found.

Researcher Johann de Bono, of the Institute of Cancer Research in London, said: ‘While I should be fairly careful what I say, I am actually very confident that these drugs can go all the way.’

In another experiment, a poison arrow drug that targets the protein completely wiped out tumours in mice. The tumours did not grow back after the drug, which is known only as DS-7330a, was stopped.

The tumours were made from cells taken from men with advanced prostate cancer. The disease had spread around their body and they had only a year or two to live.

Professor de Bono said the results provide ‘a lot of hope’ that the drug will work in men. He added: ‘When the protein B7-H3 is present on prostate cancer cells, the disease tends to progress and spread rapidly. B7-H3 is likely to become a key treatment strategy against prostate cancer.’

Other poison arrow drugs – or immunoconjugates, to give them their proper name – are already used to treat breast and cervical cancer.

DS-7300a and other immunoconjugates will now be given to hundreds of men in the UK suffering from advanced prostate cancer, with the first trials due to start next month.

Small-scale trials of DS-7300a on prostate cancer patients in the US and Japan have produced ‘very promising’ results, Professor de Bono said.

Suneil Jain, a world expert in the treatment of prostate cancer, described the research as excellent.

The Queen’s University Belfast professor added: ‘While there have been several breakthroughs in prostate cancer treatment in recent years, there is a real need for new therapies that are effective in advanced prostate cancer.

‘I will be excited to see the clinical trial results but, as always, we should remember that it can take many years for treatments to become routinely available.’

Simon Grieveson, of Prostate Cancer UK, which part-funded the research, said: ‘These findings support an exciting new way to target and attack prostate can- cer cells.

‘It is fantastic to see this potentially revolutionary treatment entering clinical trials. However, we must also gain a better understanding as to how effective it can be and which men stand to benefit the most.’