People previously infected with the coronavirus have more protection against reinfection five months later than people getting the Oxford vaccine, and the same level of immunity that is provided by the Pfizer jab, a Public Health England (PHE) study has found.

Data from PHE’s SIREN study, which follows more than 20,000 healthcare workers at more than 100 sites across Britain, looked at how many members of NHS staff in the study group caught the virus more than once.

A total of 6,614 workers were found to have had the virus in early 2020, either through antibody testing, PCR swabs or clinical evaluation based on symptoms.

Just 44 people from this group later tested positive for the coronavirus as a result of reinfection. 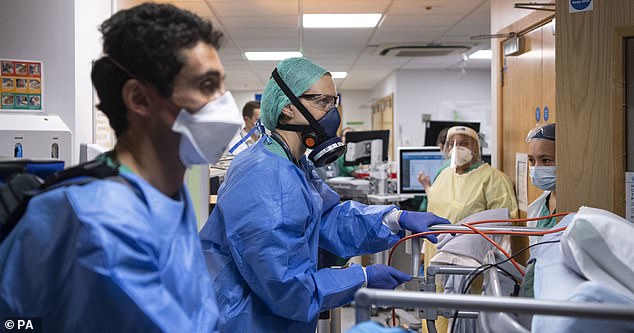 Data from Public Health England’s SIREN study, which follows more than 20,000 healthcare workers at more than 100 sites across Britain, looked at how many members of NHS staff that caught the virus twice.Just 44 cases of reinfection were seen in group of 6,614 people

Covid-19 patients maintain a form of immunity against the coronavirus for at least six months after infection, a new study shows.

The findings may mean people who have already had the virus are less likely to get reinfected if they come into contact with the virus again.

A group of more than 2,000 people working for Public Health England volunteered to take part in the study and donate blood every month, with the first people recruited in early March, before lockdown was announced.

A total of 100 people tested positive for SARS-CoV-2, the virus which causes Covid-19, but none were hospitalised. More than half (56 per cent) had symptoms.

The study focused on a specific type of immune response, called T cells, which are created by the body following infection. They are different to antibodies but are just as pivotal in fighting disease.

The scientists behind the research call their findings encouraging and are ‘cautiously optimistic’ there is long-lasting and robust immunity following coronavirus infection.

Researchers gave participants monthly antibody tests as well as weekly PCR swabs to monitor any infections between June and November.

This methodology allowed the researchers to pick up on infected people with symptoms as well as those who were asymptomatic.

Professor Susan Hopkins from PHE, lead author of the study, says this method is more stringent than is used in the testing of vaccines, which relies solely on symptomatic cases.

She explained that Pfizer/BioNTech’s efficacy rate of 95 per cent is therefore likely to be inflated as it does not account for asymptomatic infections.

In the PHE study, only 15 people from the group of 44 reinfected individuals developed symptoms.

Professor Eleanor Riley from the University of Edinburgh, who was not involved with the research, said: ‘The take home message from this study is that a primary infection with SARS-CoV-2 provides at least 94 per cent protection against symptomatic reinfection for at least five months.

‘This suggests that natural infection provides short term protection against Covid-19 that is very similar to that conferred by vaccination.’

Professor Hopkins said in a press conference that the protective effect of previous infection is approximately as robust as that of the Pfizer vaccine and ‘much better’ than the AstraZeneca/Oxford jab, which registered an efficacy rate of 62.1 per cent in participants who received two standard doses.

Researchers from PHE categorised the reinfections as either probable or possible, but are unable to say with certainty due to the fact PCR tests and genome sampling was not widely available during the first wave.

However, the 44 cases (two probable and 42 possible) meet criteria which led to their inclusion in the study, including a positive test for SARS-CoV-2 infection.

‘The findings will help to give, alongside the vaccine, the ability to slow transmission of the virus,’ Professor Hopkins said.

‘But it is not complete protection and people still need to be careful when out and about and take precautions.’

Professor Susan Hopkins from PHE said the protective effect of previous infection is as robust as that of the Pfizer vaccine and ‘much better’ than the Astrazeneca/Oxford jab, which registered an efficacy rate of 62.1 per cent in participants who received two standard doses

The researchers are only able to say the length of time natural immunity lasts for is five months because that was the duration of the study.

Professor Susan Hopkins said: ‘This study has given us the clearest picture to date of the nature of antibody protection against COVID-19 but it is critical people do not misunderstand these early findings.

‘We now know that most of those who have had the virus, and developed antibodies, are protected from reinfection, but this is not total and we do not yet know how long protection lasts.’

The SIREN trial will continue for 12 months and more data will be released soon which will reveal how the new coronavirus variants have affected reinfection rates and if natural immunity has a time limit.

However, in people who were coronavirus positive but asymptomatic the researchers found evidence they had high viral loads, which indicates they would be able to infect other people despite not feeling ill themselves.

But Professor Riley says reinfection is so rare that people who have been previously infected are ‘much less likely to transmit the virus to others’.

‘This is good news in terms of the long term trends of the pandemic. However, asymptomatic reinfections are not zero, so you cannot assume that just because you have had the virus before that you can’t be infectious,’ she says.

‘These data reinforce the message that, for the time being, everyone should consider themselves to be a potential source of infection for others and should behave accordingly.’

Boris Johnson today claimed No10 is ‘taking steps’ to protect the UK from a Brazilian Covid variant which experts fear is similar to the highly contagious Kent and South African strains.

The Prime Minister revealed officials were looking at ways to stop the variant found in travellers from Brazil arriving in Tokyo, Japan — but dodged questions about whether Britain would adopt a travel ban.

Speaking to MPs this afternoon, he said: ‘We are concerned about the new Brazilian variant.

‘We already have tough measures, as you know, to stop from new infections come from abroad. We are taking steps to do that in response to the Brazilian variation.’

Scientists working in Britain have not yet announced any coronavirus cases caused by the variant on UK soil.

It is normal for viruses to mutate and early signs don’t suggest that any of the new variants of coronavirus are more deadly than others, but in some places it is evolving to be able to spread faster.

If the virus is faster spreading it will inevitably lead to more cases which will in turn lead to a higher death count, even if the strain itself isn’t more dangerous.

The variant that emerged in Kent, now estimated to be around 56 per cent more transmissible than its predecessor, has quickly become the dominant form of the virus in England and has led to the country’s longest and toughest lockdown since March 2020.