Summer is basically here, and now is the moment to find a book to fall into.

I encourage you to begin with almost any book published by Dan Frank, the editor at Pantheon and Knopf who died earlier this week at age 67. Dan’s range of authors was wide, from Cynthia Ozick to Cormac McCarthy, Art Spiegelman to Jill Lepore. But he was known especially for nurturing a certain genre of writing about science and the natural world, with probing, elegant books by Oliver Sacks, James Gleick, Gretel Ehrlich, David Eagleman and many more.

Three decades ago I was a young editor at The Sciences magazine when Dan called to ask if I might be interested in excerpting a forthcoming book from a physicist named Alan Lightman; actually, he said, it was a novel, called “Einstein’s Dreams.” I was, and I did.

After that, Dan and I met every few months for lunch. Always he arrived with a book galley or a finished copy of something, which he offered with the same expression on his face: gleeful, boyish, slightly mischievous and entirely infectious, as if he were proposing that we sneak out of gym class to share a cigarette he had nabbed from his mom’s purse.

Those books form the heart of my personal library, and they run the gamut: fiction, nonfiction and odd amalgams between, each title uniquely magical. My single favorite might be “Daisy Bates in the Desert,” by Julia Blackburn, the true story of a woman who, in the early 1900s, lived alone in a tent among the Aboriginal peoples, and who was notorious for embellishing and reinventing the truth. It is a signature Dan Frank book — graceful, economical, quietly audacious, and one that I return to regularly, always with a smile.

This week I reached out to several of Dan’s authors for their thoughts.

James Gleick is the author of numerous books, from “Chaos: Making a New Science” to, most recently, “Time Travel: A History.”

We met in 1984 after Dan wrote me a letter to ask whether I thought an article I’d written about chaos theory for The Times Magazine might point toward a possible book. (I did think so!) He bought me lunch, bought the book, guided me, shaped the pages I sent him with the most extraordinary sensitivity and intelligence, and published it. When he left Viking for Pantheon a few years later, naturally I followed, and I never left.

I don’t know anyone who cares as deeply about books as books; who reads so widely and eclectically, in all genres and subject areas. Knowing Dan was like being in a very special book club. He steered you to the strangest places. He always wanted to know what you were reading. I’d say he’s became a quasi-legendary figure in American publishing — seldom in the limelight, and the quintessence of what an editor should be. Not an impresario, picking winners and trying to hit the jackpot. An editor who prized the book in front of him.

In an industry suffering its own kind of attention-deficit disorder, he might have seemed like a throwback to a lost era — a Maxwell Perkins out of his time. But he looked forward, not back. He became one of the first and most effective champions of graphic fiction. He never stopped seeking out young writers and championing them.

Siobhan Roberts, a senior editor at M.I.T. Tech Review, often explores mathematics for The Times and is the author of “Genius At Play: The Curious Mind of John Horton Conway” and an in-progress biography, “Let Five Be Even,” of the mathematician Verena Huber-Dyson.

Dan could make you believe anything was possible, and he’d go out of his way to convince you it was so. He seemed to possess a preternatural vision for getting at the heart of the biography I wanted to write, uniting the science with the life. I came to refer to him as Dreamboat Dan after one particularly heartening and ingenious email wherein he pulled my meandering proposal into focus, melding the mathematics with what he saw as the intrigue, fascination and mystery.

Janna Levin is a physicist and astronomer at Barnard College of Columbia University and the author of several books including “A Madman Dreams of Turing Machines” and “Black Hole Blues and Other Songs from Outer Space.”

I remember I wanted to write about infinity and Alan Turing, and it just wasn’t working as nonfiction. It was just excruciating; I had, like, 100,000 words and I had to just trash it and start over. Dan was totally open to it from the beginning: You should write this as a novel!

He was very OK with genre-bending. That was something I was always trying to do. “Black Hole Blues” I really did write as if I was writing a novel. Rai Weiss, the M.I.T. physicist, is a character who has dialogue; it just so happens it was real dialogue. I could do that with Dan’s support; I never felt pushed back into the box.

And the fact that he edited Cormac McCarthy — I mean, “The Road” is a masterpiece. When my second book was in press, Dan sent me an early copy of “The Road” and I died, I was so humbled. No joke, I called him and said, “You have to stop the press — another book shouldn’t be written for five years!”

Dan didn’t b.s. me. He pointed out that Cormac was in his 70s. He said, “Look at where you are now; look at his trajectory.” He made me excited about the writer I could become: “We can love this book, Janna. And I can still know that you’re going to give me something amazing when you’re in your 70s.”

Maria Popova, creator of the website Brain Pickings and author of “Figuring.”

The great thing about Dan was that the stuff he published was uncategorizable. He was a champion of the unexampled.

I met him through Alan Lightman, who had emailed me to say he was coming to New York to give a talk, and did I want to have dinner with him and two guests — his daughter and a man named Dan.

I instantly felt this, just, radiance, a kind of humble warmth but also a very lively mind. He was such a lovely human being, so subtle and generous, an embodiment of what a great editor does: gets out of the way, taking with him the rubble that writers put in their own path.

He was very interested in the intersection of the novelist and the scholarly. He understood uniquely how all history is a kind of narrative superimposed on reality — an invention and interpretation. Science is a human-driven search for truth. Not in a social-constructivist way; there is an elemental truth. But the search can fold in on itself, because we only have the tools of human consciousness to work with. Whatever the prostheses — telescopes, microscopes — it’s still a human mind that does the processing and analysis, that filters everything through its life, its loves, the Dans it lost, everything.

Alan Lightman is a physicist and writer at M.I.T. He has published a dozen books with Dan Frank, starting in 1986 with “A Modern Day Yankee in a Connecticut Court. and Other Essays on Science.”

In March 30, 1983, I got a letter from an editor I had never heard of, saying that if there was ever a book I wanted to write, I should get in touch: “I have been reading your column, The Physical Element, for over a year, and I am particularly impressed with the ease and grace with which you elucidate complex ideas.”

That was powerful encouragement. Before the internet, Dan would always send me a letter before anything else; not a phone call, but a letter. I kept that letter and all the letters I ever got from him.

He was interested in the kind of deep ideas that philosophers are interested in, and that really formed a bond between us. And he was willing to take literary chances. He had his own view of the human condition and the literary expression of that condition and his own standards for literary excellence. He wasn’t interested at all in whether a book would sell, only in its literary quality and if it had ideas in it.

He often gave me books to read, a wide range of things. In December when he learned he had cancer, he sent a message to tell me, and we wrote or talked every couple of weeks after that. He’d always ask me what I was reading. He’s dying of cancer, and he’d always begin the conversation by asking, “What are you reading?”

What we’re reading this weekend

“The Yellow House,” by Sarah Broom. A beautifully written story of her family’s history in East New Orleans, in a house that was eventually swamped by Katrina. Not science, but she gives a pretty account of the various U.S. Army Corps projects that helped shipping but drowned communities. — Denise Grady, reporter

“Broken,” by William Cope Moyers. The author, a journalist and son of Bill Moyers, charts an agonizing story of addiction. — Matt Richtel, reporter

“Finding the Mother Tree,” by Suzanne Simard. A personal history of growing up in a logging family in Canada and her journey as a scientist understanding the interconnection of living things. — James Gorman, reporter

“Empire of Pain,” by Patrick Raden Keefe. I’ve read and edited many stories about the devastation wrought by OxyContin and other opioids, but Keefe tells the story of this singular family — the Sackler dynasty, and their role in an epidemic that has killed hundreds of thousands of Americans — with novelistic, narrative drive. I come away from it reminded of how we journalists should never assume the wisdom federal regulators who approve the drugs we take; there are billions of dollars in profits at stake, and that can warp the process. — Celia Dugger, editor

Science in The Times, 97 years ago today 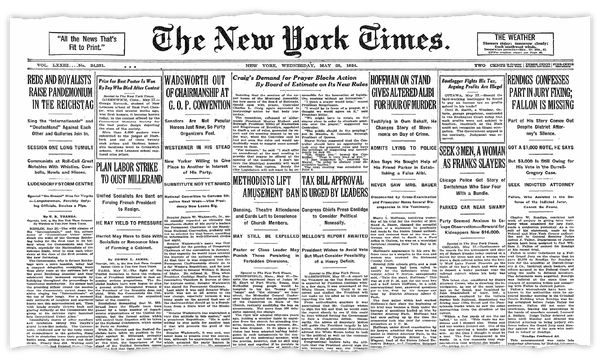 COPENHAGEN — The claims of H. Grindell Matthews in connection with his “diabolical ray” are ridiculed in a statement by A.J. Roberts, former liaison officer with the British air and submarine forces, who claims to have cooperated with Matthews after the war in vibration experiments.

Roberts says that he himself is “able to stop a motorcycle by the so-called death ray, which has nothing to do with electricity, but is a system of light and sound vibration.”

“I used it successfully in exploding mines and bombs in submarine warfare,” he adds. “It is, however, impossible to destroy magazines, Zeppelins or airplanes unless they are previously made receptive for the vibration rays.”

Roberts has promised a public demonstration of the ray on a motor car here Friday.