Richard R. Ernst, a Swiss chemist who won the Nobel Prize in 1991 for his work refining nuclear magnetic resonance, or N.M.R., spectroscopy, the powerful method of chemical analysis behind M.R.I. technology, died on June 4 in Winterthur, in northern Switzerland. He was 87.

The Swiss Federal Institute of Technology Zurich (E.T.H. Zurich), where Dr. Ernst had spent almost his entire career, announced the death on its website. No cause was given.

As a chemist he was pre-eminent.

“To compare him to Einstein would offend physicists,” said Jeffrey A. Reimer, an N.M.R. expert at the University of California, Berkeley. “But in terms of his impact in the discipline, Ernst is foundational.”

Dr. Ernst was driven and demanding — of himself above all others — and even as his stature grew, he had remarkably little ego, his colleagues and former students said. He was quick to give credit to collaborators and described his own contributions in modest terms.

“I’m not really what one would imagine to be a scientist who wants to understand the world,” he said in a 2001 Nobel interview. He continued, “I’m a toolmaker and not really a scientist in this sense, and I wanted to provide other people these capabilities of solving problems.”

N.M.R. spectroscopy was first developed in the 1940s and early ’50s by Felix Bloch and Edward Mills Purcell, who shared the 1952 Nobel Prize in Physics for the achievement. Using this technique, scientists place a substance in a magnetic field, which brings the nuclei of its atoms into alignment. They then bombard it with radio pulses, which force the nuclei out of alignment. As the nuclei return to alignment, the atoms give off unique electromagnetic signals that can be analyzed to determine the chemical composition and molecular structure of the material.

When Dr. Ernst began studying N.M.R. as a graduate student in the late 1950s, the method required researchers to scan a substance in a magnet slowly and apply continuous radio waves. It suffered, Dr. Ernst wrote in an autobiographical sketch on the Nobel website, “from a disappointingly low sensitivity that severely limits its applications.” 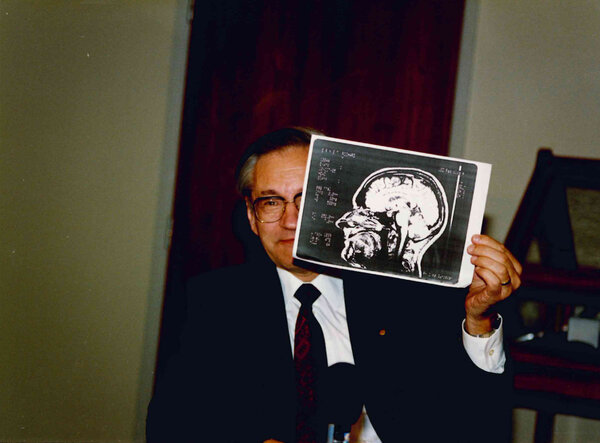 Instead of slowly scanning a substance, Dr. Ernst hit it with a short but intense pulse of radio waves. Then, with the help of a computer, he applied a complex mathematical operation to analyze the signal. This method, known as Fourier Transform N.M.R., or F.T.-N.M.R., was far more sensitive, allowing scientists to study more kinds of atoms and molecules, particularly those that were in low abundance.

“That was a very big invention which was ahead of his time,” said Matthias Ernst, a physical chemist at E.T.H. Zurich who was a former student of Dr. Ernst’s (and is of no relation). This was the 1960s, and the personal computing era had not yet begun; instead, Dr. Ernst and his colleagues had to transfer their data from punch tape to punch cards and then carry them to a computer center for processing.

In the 1970s, Dr. Ernst developed two-dimensional N.M.R. In this technique, samples are bombarded with sequences of radio pulses over time. The resulting signals provide more information about the sample and allow scientists to determine the precise composition and structure of large and complex biological molecules.

“It was beautiful,” said Dr. Reimer, who was an undergraduate chemistry student when Dr. Ernst published his results. “Richard really pushed the envelope.”

Two-dimensional N.M.R. is the basis of M.R.I., a medical advancement that allowed doctors to create detailed images of the body’s internal structures. “He made N.M.R. the powerful technique that it is today in chemistry, biochemistry and biology,” said Robert Tycko, a physical chemist at the National Institutes of Health and the president of the International Society of Magnetic Resonance, in a phone interview.

Dr. Ernst was on a trans-Atlantic flight when his Nobel Prize in Chemistry was announced in October 1991; he learned of the honor from the pilot. But in keeping with his characteristic modesty, he was unsettled to discover that he was the sole winner of the prize.

“He was very happy for the recognition,” said Beat H. Meier, a physical chemist at E.T.H. “But he also was a little disturbed by the fact that he got it alone and that he was singled out when a lot of people have also contributed.”

Richard Robert Ernst was born on Aug. 14, 1933, in Winterthur to Robert Ernst, an architect, and Irma Ernst-Brunner. As a child, he developed a passion for music and chemistry. When he was 13, he found a case of chemicals in the attic of his home and learned that it had belonged to an uncle of his.

“I became almost immediately fascinated by the possibilities of trying out all conceivable reactions with them, some leading to explosions, others to unbearable poisoning of the air in our house, frightening my parents,” he wrote in the Nobel sketch. He began devouring chemistry books and abandoned plans to become a composer.

He earned his undergraduate degree in chemistry at E.T.H. Zurich in 1956 and then briefly served in the Swiss military before returning to E.T.H. for a doctorate in physical chemistry, which he earned in 1962.

He married Magdalena Kielholz the next year. Survivors include his wife and their three children, Anna, Katharina and Hans-Martin. Matthias Ernst, his former student, said Dr. Ernst died in a retirement home.

In 1963, Dr. Ernst joined the technology company Varian Associates in Palo Alto, Calif., as a scientist. It was there that he developed F.T.-N.M.R.

He returned to E.T.H. in 1968 and taught and conducted research there until his retirement in 1998. In addition to the Nobel, he received the Wolf Prize for Chemistry, the Horwitz Prize, the Marcel Benoist Prize and 17 honorary doctorates.

Dr. Ernst was a self-confessed “work-addict,” as he put it.

“He had supper with his wife, and then went back to his desk and worked late in the night,” said Alexander Wokaun, a retired chemist and professor emeritus at E.T.H. who had been one of Dr. Ernst’s Ph.D. students. “But in that total devotion to science, I think he showed us what can be achieved.”

Dr. Ernst gave his students freedom and took an interest in the work of young scientists who had not yet made names for themselves. “At gatherings of scientists or scientific conferences,” Dr. Tycko said, “he would sit in the front row and take careful notes listening to other people describe their work, which is very unusual, actually, for someone of his stature.”

Dr. Ernst retained his love of music and also developed a passion for Tibetan scroll paintings, amassing an enormous collection of them with his wife and adorning nearly every wall of their home with them, Dr. Wokaun said. He used advanced laboratory techniques to examine the pigments of the paintings to learn where and when they had been created.

After receiving his Nobel, he traveled and gave lectures about the responsibility that he believed scientists had in contributing to society.

“He always told me, ‘It’s not just enough for a scientist to accumulate knowledge, just for the sake of it,’” Dr. Wokaun said. “‘For what good, for what purpose, are you doing that?’”