A robot artist has created an eerie new portrait of Queen Elizabeth II, to mark the monarch’s Platinum Jubilee.

Entitled ‘Algorithm Queen’, the portrait was painted by Ai-Da, an artificial intelligence robot built in 2019 that creates drawings, painting, and sculptures.

Ai-Da uses cameras in her eyes and computer algorithms to process human features, and transform what she ‘sees’ into co-ordinates.

She then uses these coordinates to calculate a virtual path for her robotic arm, as it draws and paints onto canvas to create pieces of art.

Algorithm Queen was layered and scaled to produce the final multi-dimensional portrait of the monarch.

This is the first time in history a humanoid robot has painted a member of the Royal Family.

‘I’d like to thank Her Majesty the Queen for her dedication, and for the service she gives to so many people,’ said Ai-Da, who is also able to converse using a specially designed AI language model.

‘She is an outstanding, courageous woman who is utterly committed to public service.

‘I think she’s an amazing human being, and I wish The Queen a very happy Platinum Jubilee.’ 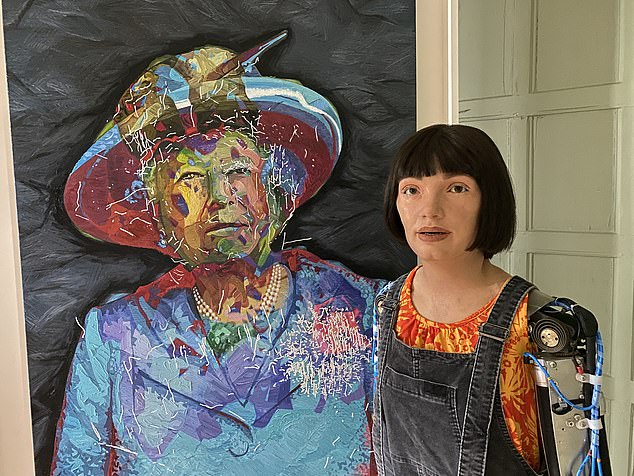 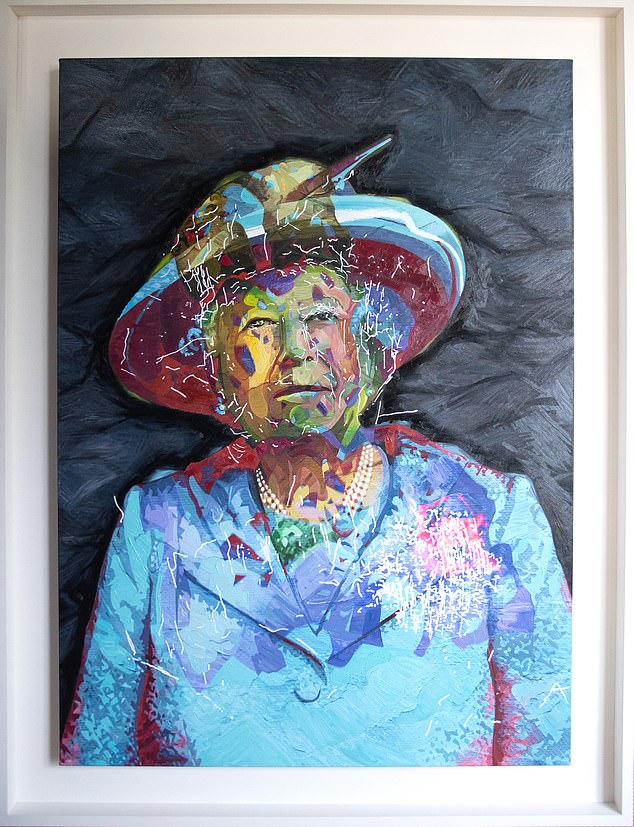 British-made robot Ai-Da spent 10 days in detention at Egyptian customs in October 2021, because agents feared her robotics may have been covert spy tools.

Creator Aidan Meller said that Ai-da had originally been detained by guards who were suspicious of her modem, a device which connects her to the internet.

He offered to remove it, but then guards raised issues with cameras mounted in her eyes, which are essential to her ability to paint.

Ai-Da was eventually released just hours before the start of the ‘Forever is Now’ exhibition in Cairo, where she was due to appear.

The machine’s artistic process was designed to reflect the different aspects of technological change that have taken place during the Queen’s 70-year reign.

At the time of the Queen’s coronation in 1953, the first circuit board computers had only just been invented – a design which remained mainstream until the 1960s.

Since then, the Queen has witnessed an burst of innovation in computer technology in the UK, including the birth of machine learning and artificial intelligence.

‘We are excited Ai-Da Robot has made history just in time for the Queen’s Jubilee,’ said creator and project director Aidan Meller.

‘The Queen has been a stable and strong leader in a period of extraordinary change and development in history.

‘We are in unprecedented technological times, and so we are pleased we can take a moment to think about all that has changed during the Queen’s life.

‘”Algorithm Queen” by Ai-Da Robot gives us a marker of how far things have come in her life, and a great way to acknowledge her faithful service.’

‘Algorithm Queen’ will be exhibited publicly in London later this year, and will be revealed on the Ai-Da Robot artist website at 10am on Friday, May 27.

Ai-Da – named after the 19th-century mathematician Ada Lovelace – is the world’s first ultra-realistic robot capable of drawing people from life, according to her creators.

She was devised in Oxford by Aidan Meller, a specialist in modern and contemporary art, before being built in Cornwall by Engineered Arts and programmed internationally.

The robot’s capabilities were developed by PhD students and professors at the Universities of Oxford and Birmingham.

Last year, she exhibited a series of ‘self portraits’ at The Design Museum London, which she created by ‘looking’ into a mirror with her camera eyes.

She has also had a solo show at 59th International Art Exhibition, entitled ‘Leaping into the Metaverse’, and participated in Forever is Now 2021, the first major contemporary art exhibition at the great Pyramids of Giza in Egypt.

‘The greatest artists in history grappled with their period of time, and both celebrated and questioned society’s shifts,’ said Meller.

‘Ai-Da Robot as technology, is the perfect artist today to discuss the current obsession with technology and its unfolding legacy.

‘Is the so called “progress” in technology something we really want, and if so, how should it manifest?’

‘The Game is Over!’ Google’s DeepMind says it is close to achieving ‘human-level’ artificial intelligence

DeepMind, a British company owned by Google, may be on the verge of achieving human-level artificial intelligence (AI).

Nando de Freitas, a research scientist at DeepMind and machine learning professor at Oxford University, has said ‘the game is over’ in regards to solving the hardest challenges in the race to achieve artificial general intelligence (AGI).

AGI refers to a machine or program that has the ability to understand or learn any intellectual task that a human being can, and do so without training.

According to De Freitas, the quest for scientists is now scaling up AI programs, such as with more data and computing power, to create an AGI.

DeepMind had previously unveiled a new AI ‘agent’ called Gato that can complete 604 different tasks ‘across a wide range of environments’.

Gato uses a single neural network – a computing system with interconnected nodes that works like nerve cells in the human brain.