‘Supersonic ballet!’ Rocket Lab succeeds in catching a falling rocket with a HELICOPTER for the first time – before dropping it into the ocean moments later

Space firm Rocket Lab has succeeded in catching a falling rocket with a helicopter for the first time – although it had to drop it into the ocean less than a minute later.

The California-based company’s rocket lifted off at 10:50am Tuesday (22:50 GMT Monday) on the Mahia Peninsula, New Zealand and sent 34 satellites into orbit.

Rocket Lab’s four-story-tall Electron booster stage fell back through Earth’s atmosphere and successfully deployed a parachute to reduce its speed.

But after briefly catching the spent rocket, a helicopter crew was quickly forced to let it go again for safety reasons, and it fell into the Pacific Ocean where it was collected by a waiting boat.

A mid-air capture has been tried before, albeit unsuccessfully by NASA’s Genesis spacecraft back in 2004 – making Tuesday’s efforts a historic first. 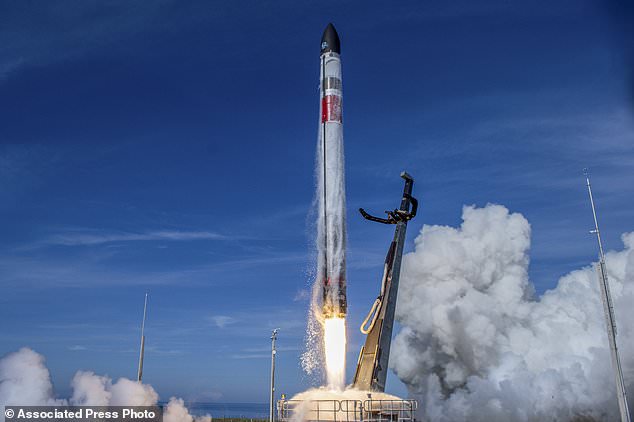 In this image supplied by Rocket Lab, the Electron rocket blasts off for its ‘There And Back Again’ mission from their launch pad on the Mahia Peninsula, New Zealand, Tuesday, May 3, 2022. The California-based company regularly launches 18-meter (59-foot) rockets from the remote Mahia Peninsula in New Zealand to deliver satellites into space 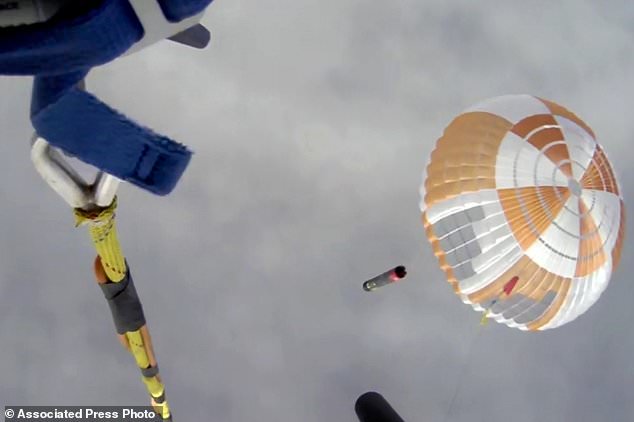 In this image, a helicopter hovers above as it attempts to capture Electron’s first stage in mid-air by helicopter above New Zealand, Tuesday, May 3, 2022

To do this, it needs to be able to bring the rocket stage safely back to Earth after it has blasted off and deployed payloads into space.

Rocket Lab named its latest mission ‘There And Back Again’ – a reference to the movie trilogy ‘The Hobbit’ which was filmed in New Zealand.

‘Bringing a rocket back from space and catching it with a helicopter is something of a supersonic ballet,’ said Peter Beck, Rocket Lab founder and CEO.

‘A tremendous number of factors have to align and many systems have to work together flawlessly, so I am incredibly proud of the stellar efforts of our Recovery Team and all of our engineers who made this mission and our first catch a success.

‘From here we’ll assess the stage and determine what changes we might want to make to the system and procedures for the next helicopter catch and eventual re-flight.’

On Twitter, Beck said it was ‘no big deal’ that the rocket had to be dropped into the ocean, adding: ‘The rocket splashed down safely and the ship is loading it now.’

Beck hailed the mission as a success, saying that almost everything went to plan and that the unexpected load issue was a tiny detail which would soon be fixed.

‘They got a great catch. They just didn’t like the way the load was feeling,’ Beck said of the helicopter crew in a conference call after the launch.

‘The “There And Back Again” mission saw Rocket Lab complete a mid-air capture of the Electron booster with a helicopter for the first time.

After launching to space, Electron’s first stage returned to Earth under a parachute. At 6,500 ft, Rocket Lab’s Sikorsky S-92 helicopter rendezvoused with the returning stage and used a hook on a long line to capture the parachute line.

The mid-air capture is a major milestone in Rocket Lab’s pursuit to make Electron a reusable rocket to increase launch frequency and reduce launch costs for small satellites.

After the catch, the helicopter pilot detected different load characteristics than previously experienced in testing and offloaded the stage for a successful splashdown.

The stage is being loaded onto Rocket Lab’s recovery vessel for transport back to the company’s production complex for analysis and assessment for re-flight as planned.’

However, this was only part of the mission; the second phase aimed to perform a mid-air capture of the Electron booster with a helicopter for the first time.

Two and a half minutes after launching from Rocket Lab’s launch site on the tip of New Zealand’s north island, the first and second stages of the rocket separated.

The latter continued to orbit, while the first stage plummeted to Earth at speeds of more than 5,000 mph (8,000 kph).

This first stage then deployed a parachute to slow its descent to around 22 miles per hour as it entered a ‘capture zone’ above the Pacific.

The rocket stage was caught with a long, vertical cable with a hook on the end hanging from the underside of a piloted Sikorsky S-92 helicopter, which had been tracking its descent and moving into position.

When the parachuted rocket came into view during its descent of 22 miles per hour, the cable was steered by the helicopter’s two pilots over the rocket to capture it.

The helicopter cable latched onto the booster’s capture line, as seen on the company’s live stream, prompting cheers and applause from Rocket Lab engineers in the company’s mission control centre in Long Beach.

But the cheers from engineers turned to audible groans under a minute later during the stream as the helicopter pilots were forced to release the rocket from the cable and dunk it into the Pacific Ocean. 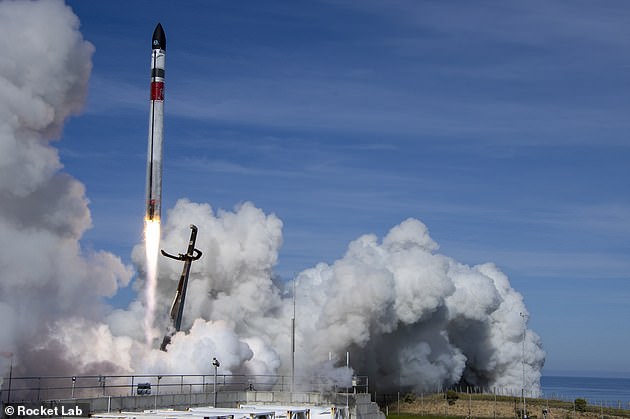 In this image supplied by Rocket Lab, the Electron rocket blasts off for its ‘There And Back Again’ mission from their launch pad on the Mahia Peninsula, New Zealand, Tuesday, May 3, 2022. The California-based company regularly launches 18-meter (59-foot) rockets from the remote Mahia Peninsula in New Zealand to deliver satellites into space. (Rocket Lab via AP 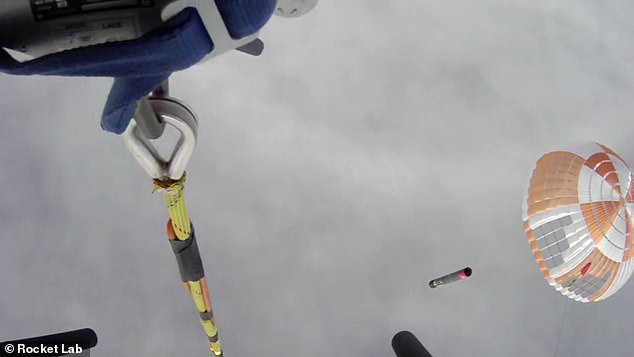 The helicopter cable latched onto the booster’s capture line, as seen on the company’s live stream

The team had noticed ‘different load characteristics’ than what had been experienced during previous capture tests, a Rocket Lab spokesperson later confirmed.

A fully successful test would have involved carrying the rocket booster back to land or onto a barge without having it touch ocean water.

The company described the brief midair capture at 1,980 meters (6,500 feet) by the helicopter as a milestone.

It was not immediately clear whether Rocket Lab planned to reuse the booster. 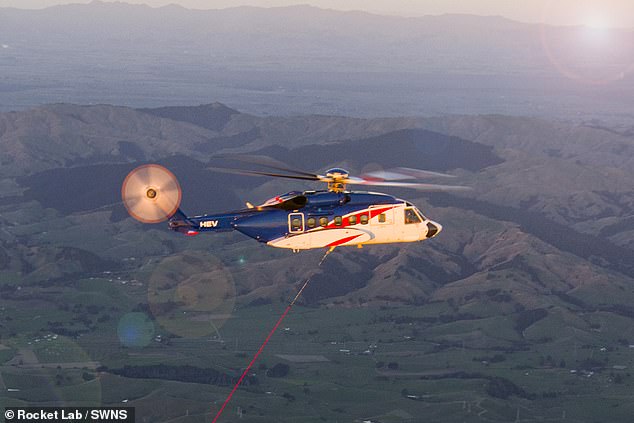 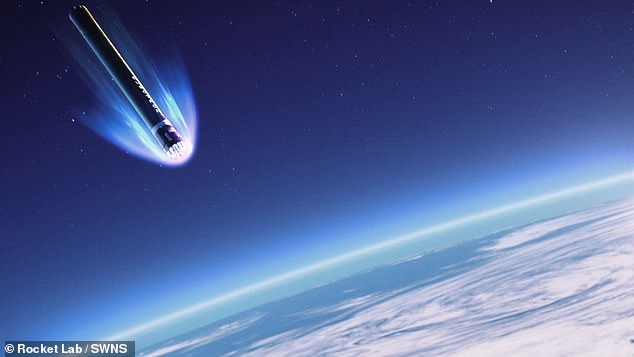 A mid-air capture has been tried before, albeit unsuccessfully by NASA’s Genesis spacecraft back in 2004 – making Tuesday’s efforts a historic first (artist’s impression)

A detailed analysis should reveal the reasons for the discrepancy in the load characteristics, according to Beck.

He said he still hoped the company could salvage some or all of the spent rocket booster, despite it getting dunked in salt water which they’d hoped to avoid.

Making its rockets reusable will enable the company to increase the number of launches it makes and reduce costs, the firm claims.

Each small satellite carries a unique sensor designed to demonstrate innovative technologies on orbit. Unicorn-2 will be carrying an optical night-time imaging payload designed to monitor light pollution across the globe.

The mission aims to demonstrate the high performance of Copia’s novel design via -on-orbit testing with 1U solar arrays able to capture up to 200W.

Aurora Propulsion Technologies: The AuroraSat-1 also known as The Flying Object will deploy to low Earth orbit in a demonstration of the company’s proprietary propulsion devices and plasma brakes that provide efficient propulsion and deorbiting capabilities for small satellites.

The CubeSat will validate the water-based propellant and mobility control of its Resistojets that can assist CubeSats with detumbling capabilities and propulsion-based attitude control.

AuroraSat-1 will also test its deployable Plasma Brakes which combine a micro-tether with charged particles in space, or ionospheric plasma, to generate significant amounts of drag to deorbit the spacecraft safely at the end of its life.

E-Space: E-Space’s payload will consist of three demonstration satellites to validate the systems and technology for its sustainable satellite system.

The satellites have small cross-sections, to decrease the risk of collision from the millions of untrackable space objects and will automatically de-orbit if any systems malfunction.

Eventually, the satellites will sacrificially capture and deorbit small debris to burn up on re-entry, setting a new standard in space environmental management.

UNSEENLABS: BRO-6 is the sixth satellite of the Unseenlabs’ constellation, dedicated to the detection of radiofrequency signals.

Thanks to its technology, the French company detects any vessel at sea, even those whose cooperative beacon is turned off.

The launch of BRO-6 satellite will allow Unseenlabs to improve its revisit time and deliver more customers.