Massachusetts Institute of Technology and Imperial College London engineers have created a landmark a new method to create exceptionally tough and functional materials. And this arrived from an unexpected source: via a mixture of bacteria and yeast similar to the “kombucha mother” used to ferment the popular tea.

Functions they could perform include sensing environmental pollutants and even tendencies to heal themselves.

The international team of researchers also revealed how they could incorporate yeast directly into the cellulose.

This could create “living materials” boasting the potential to purify water for soldiers on the battlefield or create “smart” packaging materials capable of detecting damage. 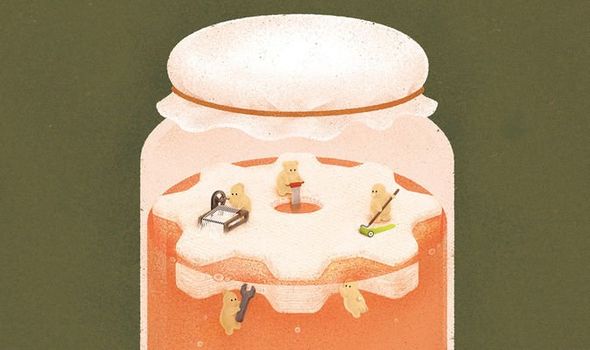 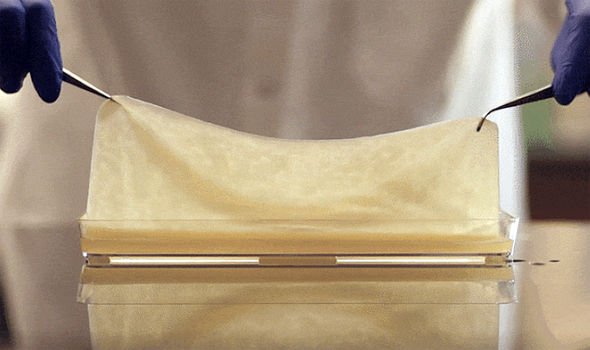 She said: “This work provides insights into how synthetic biology approaches can harness the design of biotic-abiotic interfaces with biological organisation over multiple length scales.

“This is important to the Army as this can lead to new materials with potential applications in microbial fuel cells, sense and respond systems, and self-reporting and self-repairing materials.”

E. coli’s ability to generate biofilms embedded with materials such as gold nanowires has long been recognised.

However, such films are both too small and thin, making them difficult to involve in large-scale applications. 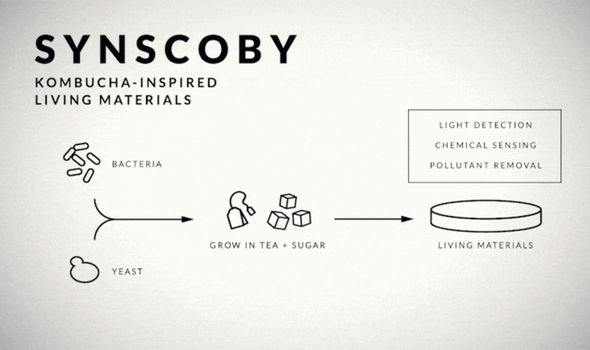 But this latest research has uncovered an innovative method of harnessing microbes to generate larger quantities of more substantial materials.

They arrived at the idea of creating a microbe population similar to a kombucha mother – a blend of both bacteria and yeast.

This fermentation process usually contains at least species of bacteria and one or more yeast species.

Most of the wild yeast strains used for fermentation are difficult to genetically modify, so the researchers replaced them with the laboratory strain Saccharomyces cerevisiae.

They combined the yeast with a type of bacteria called Komagataeibacter rhaeticus, previously isolated from a kombucha mother, and known to release significant quantities of cellulose.

Because the researchers used a laboratory strain of yeast, they could engineer the cells to do any of the things which its relative could.

This includes producing bioluminescent enzymes or sensing pollutants in the environment.

The yeast can also be programmed so that they can break-down pollutants after their detection – useful to the US Army in chemical and biological defence.

Timothy Lu, an MIT associate professor of electrical engineering and computer science and of biological engineering, said: “We foresee a future where diverse materials could be grown at home or in local production facilities, using biology rather than resource-intensive centralised manufacturing.” 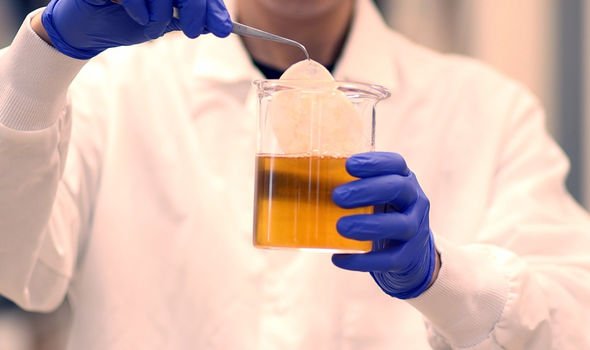 Dr Jim Burgess a program manager for the Army Research Office, added: “Our community believes that living materials could provide the most effective sensing of chem/bio warfare agents, especially those of unknown genetics and chemistry.”

The bacteria in the culture produced large-scale quantities of tough cellulose serving as a scaffold.

The system was designed so they can control whether the yeast themselves or just the enzymes produced are incorporated into the cellulose structure.

The material takes only hours to grow and if left long enough, it can rapidly grow to occupy a bathtub-sized space.

Tzu-Chieh Tang, MIT graduate student and the paper’s lead author, said: “We think this is a good system that is very cheap and very easy to make in very large quantities.”

To demonstrate the potential of their microbe culture the researchers created a material incorporating yeast that senses estradiol, sometimes found as an environmental pollutant.

These yeasts can also be swapped for other strains, meaning they can be used in the detection of pollutants, metals, or even pathogens.

The next step will see researchers examining the Syn-SCOBY system for use in the biomedical or food sector.

Engineering the yeast cells to produce antimicrobials or proteins that can, for example, benefit human health.