Why food still sticks to non-stick frying pans: Oil is dispersed outwards leaving dry spots in the centre – but completely wetting the surface can reverse the issue, scientists say

Scientists have revealed why food sticks to non-stick pans – an issue that plagues the kitchens of chefs and home cooks alike.

Fluid mechanics experts at the Czech Academy of Sciences say oil in frying pans is dispersed outwards, leaving dry spots in the centre for food to stick to.

This is the result of a process called thermocapillary convection – where, under a certain temperature, liquid such as oil flows from areas of low surface tension to areas of high surface tension.

The issue affects normal frying pans and even pans marketed as ‘non-stick’, which contain ceramics or feature a layer of stick-resistant chemicals.

Completely wetting the surface of the non-stick pan before starting to cook anything can solve the issue, however, the experts claim.

‘To avoid unwanted dry spots, the following set of measures should be applied – increasing the oil film thickness, moderate heating, completely wetting the surface of the pan with oil, using a pan with a thick bottom or stirring food regularly during cooking,’ said study author Alexander Fedorchenko.

Non-stick cookware features an all-important coating made from a chemical called polytetrafluoroethylene (PTFE).

PTFE is marketed by a US chemical company as ‘as Teflon’ – and it is often known by this name.

Food will sometimes get stuck to a heated surface, even if oil and a non-stick frying pan is used, meaning we have to scrape our meals off onto our plate, often with unappetising results. 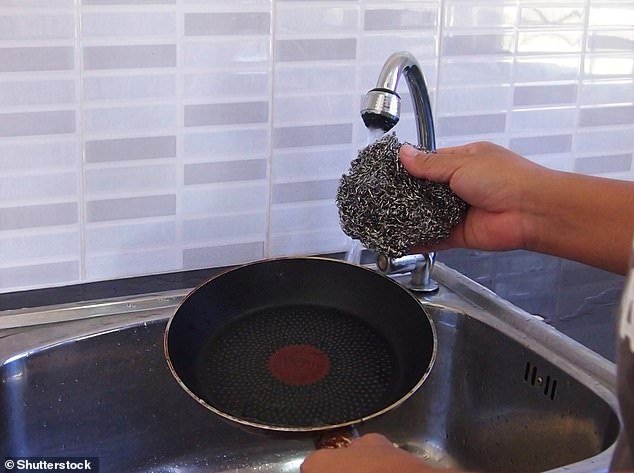 Despite the use of non-stick frying pans, foods will sometimes get stuck to a heated surface, even if oil is used. The results can be very messy and unappetising

Convection may be to blame for our stuck-on food.

The warmer matter (in this case oil) has faster moving molecules, making it less dense.

Thermocapillary convection is a type of convection.

Thermocapillary convection is the mass transfer along an interface between two fluids due to a gradient of the surface tension, under a certain temperature.

Czech Academy of Sciences researchers therefore wanted to investigate the fluid properties of oil on a flat surface, such as a frying pan.

The experimental investigation used a non-stick pan with a surface comprised of ceramic particles, as well as a Teflon-coated pan.

Ceramic cookware is non-stick too, but it does not contain PTFE or other chemicals in Teflon pans such as perfluorooctanoic acid (PFOA), which has previously been linked with cancer, high cholesterol and reduced immunity.

A video camera, placed above the pans as they were heated, was used to measure the speed at which a dry spot formed and grew.

Video footage from the researchers shows the dry spot spreading from the centre of the ceramic pan in only four seconds.

Further experiments with a Teflon-coated pan showed the same results.

‘We experimentally explained why food sticks to the centre of the frying pan,’ said Fedorchenko.

‘This is caused by the formation of a dry spot in the thin sunflower oil film as a result of thermocapillary convection.’

Researchers broke down the fluid process into steps – essentially, when a pan is heated from the hob below, a temperature gradient is established in the film of cooking coil.

For common liquids, such as the sunflower oil used in the experiment, the surface tension decreases when temperature increases.

A surface tension gradient is established, directed away from the centre where the temperature is higher, and toward the pan’s edge.

This gradient sets up thermocapillary convection, which moves oil outward.

When the oil film in the middle becomes thinner than a critical value, the film ruptures, exposing the dreaded dry spot.

The researchers also determined the conditions that lead to dry spots for both stationary and flowing films, detailed in their paper, which has been published in Physics of Fluids.

These conditions include a decrease in the local film thickness below a critical size, as well as the size of the deformed region falling below a number known as the capillary length.

Researchers say the phenomenon also occurs in other situations, such as the thin liquid films used in fluid distillation columns or other devices that may have electronic components.

‘The results of this study may, therefore, have wider application.’

ARE CHEMICALS IN NON-STICK PANS DANGEROUS?

Chemicals used in non-stick pans have increased tumours in the liver, pancreas and testicles of lab animals, as well as reducing their fertility.

Humans may be exposed to such chemicals, known as PFOAs, when pans are overheated or scratched.

When such pans are thrown away, they may leach chemicals into landfill sites that could enter water and food chains.

Other chemical sources include clothing and carpets.