Premier League footballers received 60,000 abusive Twitter messages in the first half of last season – with half directed at just 12 players including Cristiano Ronaldo, Harry Maguire and Marcus Rashford, report reveals

After months of anticipation, the new season of the Premier League is finally set to begin this weekend, with Crystal Palace kicking things off against Arsenal on 5 August.

Ahead of the new season, Ofcom has revealed the shocking scale of personal attacks suffered by footballers every day on Twitter.

According to Ofcom’s latest report, Premier League footballers received 60,000 abusive Twitter messages in the first half of last season.

Half of those tweets were directed at just 12 players, including Cristiano Ronaldo, Harry Maguire, and Marcus Rashford.

‘These findings shed light on a dark side to the beautiful game,’ said Kevin Bakhurst, Ofcom’s Group Director for Broadcasting and Online Content.

‘Online abuse has no place in sport, nor in wider society, and tackling it requires a team effort.’ 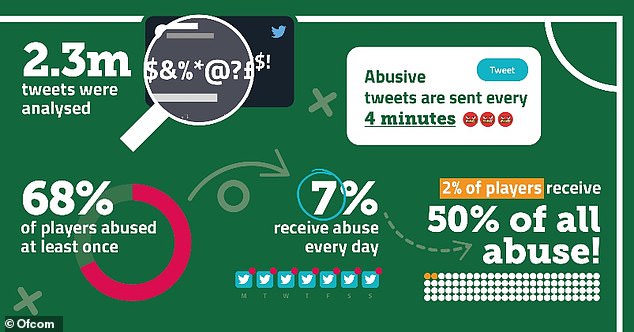 According to Ofcom’s latest report, Premier League footballers received 60,000 abusive Twitter messages in the first half of last season 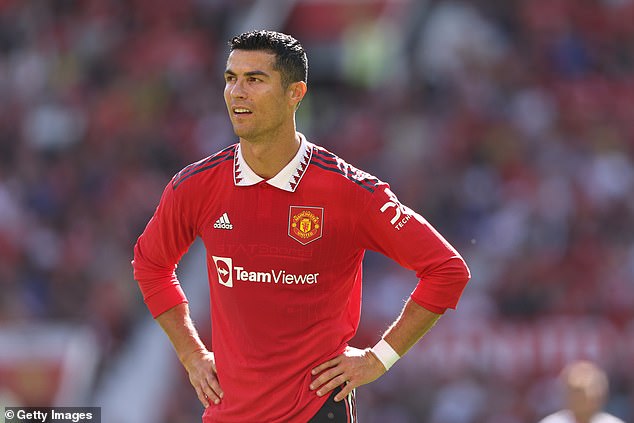 Half of the abusive tweets were directed at just 12 players, including Cristiano Ronaldo (pictured), Harry Maguire, and Marcus Rashford

Twitter said it had identified and removed 1,622 tweets during the final and in the 24 hours after the game – rising to 1,961 three days after the game.

However, until now, the ongoing extent of online abuse directed at footballers has remained unclear.

Ofcom, which is preparing to regulate tech giants under new Online Safety laws, commissioned The Alan Turing, which used machine learning to analyse more than 2.3 million tweets directed at Premier League footballers over the first five months of last season.

A team of experts also manually reviewed a random sample of 3,000 tweets.

The tweets were assigned to one of four categories – Neutral, Positive, Critical or Abusive.

An abusive tweet was defined as a tweet that ‘threatens, insults, derogates, dehumanises, mocks or belittles a player.’

‘This can be implicit or explicit, and includes attacks against their identity. We include use of slurs, negative stereotypes and excessive use of profanities,’ Ofcom explained.

Similarly, the machine-learning analysis of all 2.3 million tweets indicated that 2.6 per cent contained abuse. 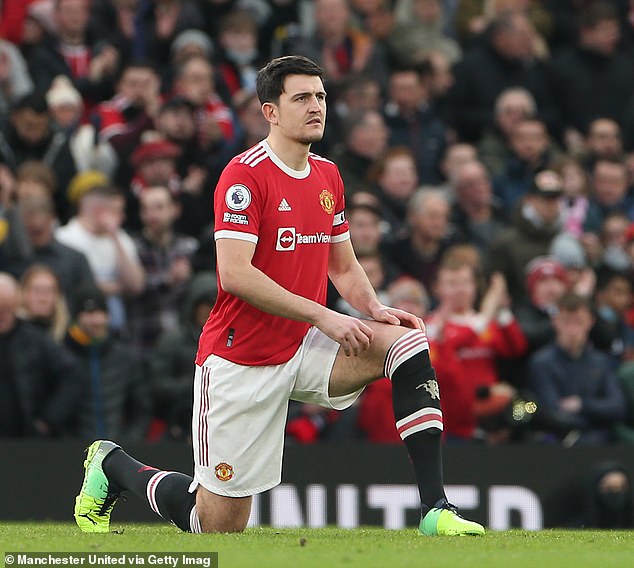 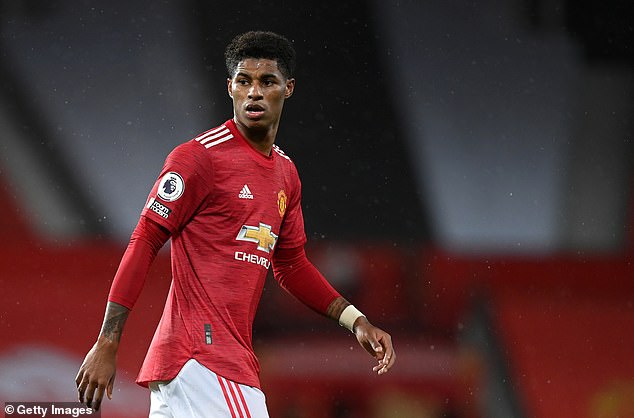 When did abuse peak?

The largest number of abusive tweets (3,961) were sent on 27 August 2021, when Cristiano Ronaldo was transfered from Juventus to Manchester United.

‘The abuse was triggered by a tweet from Harry Maguire in which he apologised for Manchester United’s performance, saying that they were going through “a rough period”’, the report explains.

‘Many Twitter users reacted with insulting and demeaning language, such as telling him to “shut up” or “f*ck off”.’

While these figures might sound low, these still equate to nearly 60,000 tweets – an average of 362 every day.

Further analysis revealed that around one in 12 of these abusive tweets targeted a player’s race or gender.

Over the period studied, 68 per cent of players received at least one abusive tweet, while seven per cent received abuse every day.

Meanwhile, half of all the abuse was targeted at just 12 players, who received an average of 15 abusive tweets every day.

However, it was Harry Maguire who received the largest percentage of abusive tweets (14.9 per cent), followed by Frederico Rodrigues Santos (7.60 per cent) and Harry Kane (5.3 per cent).

Dr Bertie Vidgen, lead author of the report and Head of Online Safety at The Alan Turing Institute said: ‘These stark findings uncover the extent to which footballers are subjected to vile abuse across social media.

‘Prominent players receive messages from thousands of accounts daily on some platforms.’

Based on the findings, the researchers are calling on social media firms to do more to protect their users.

‘When we become the regulator for online safety, tech companies will have to be really open about the steps they’re taking to protect users. We will expect them to design their services with safety in mind.’

In a separate poll of the public, Ofcom found that more than a third of fans who follow football (37 per cent) have seen abuse directed towards footballers.

However, only one in four flagged or reported the abusive content.

‘Supporters can also play a positive role in protecting the game they love,’ Mr Bakhurst concluded.

‘Our research shows the vast majority of online fans behave responsibly, and as the new season kicks off we’re asking them to report unacceptable, abusive posts whenever they see them.’

WHAT ARE TWITTER’S POLICIES?

The company does not allow people to post graphic violence.

This could be any form of gory media related to death, serious injury, violence, or surgical procedures.

Adult content – that includes media that is pornographic and/or may be intended to cause sexual arousal – is also banned.

Some form of graphic violence and adult content is allowed in Tweets marked as containing sensitive media.

However, these images are not allowed in profile or header images.

Twitter may sometimes require users to remove excessively graphic violence out of respect for the deceased and their families.

The platform is not allowed to be used to further illegal activities.

Users are not allowed to use badges, including but not limited to the ‘promoted’ or ‘verified’ Twitter badges, unless provided by Twitter.

Accounts using unauthorised badges as part of their profile photos, header photos, display names, or in any way that falsely implies affiliation with Twitter or authorisation from Twitter to display these badges, may be suspended.

Username squatting – when people take the name of a trademark company or a celebrity – is not allowed.

Twitter also has the right to remove accounts that are inactive for more than six months.

Factors we may take into consideration include whether the behaviour is targeted at an individual; the report has been filed by the target of the abuse or a bystander or the behaviour is newsworthy and in the legitimate public interest.

Users may not make specific threats of violence or wish for the serious physical harm, death, or disease of an individual or group of people.

This includes, but is not limited to, threatening or promoting terrorism.

Users may not direct abuse at someone by sending unwanted sexual content, objectifying them in a sexually explicit manner, or otherwise engaging in sexual misconduct.

Users may not use hateful images or symbols in your profile image or profile header.

Users may not publish or post other people’s private information without their express authorisation and permission.

Users may not post or share intimate photos or videos of someone that were produced or distributed without their consent.

Users may not threaten to expose someone’s private information or intimate media.