The mystery of the ‘massive shark die-off’: Sharks almost disappeared from Earth’s oceans 19 million years ago when numbers plunged by more than 90 per cent — but scientists have no idea what caused it

Sharks almost disappeared from the world’s oceans around 19 million years ago, with population numbers plummeting by more than 90 per cent, a study found.

Researchers led from Yale University constructed a record of shark diversity and abundance spanning the last 40 million years based on fossil teeth and scales.

The episode came, the team explained, at a time when shark numbers had been some ten times greater than they are today, and they never truly recovered.

This fundamental shift in the ecological composition of pelagic predators paved the way for the for the large, migratory shark lineages that now dominate our oceans.

However, the cause of this mysterious ‘massive shark die-off’ and its wider implications are, at least for the present, unknown to scientists. 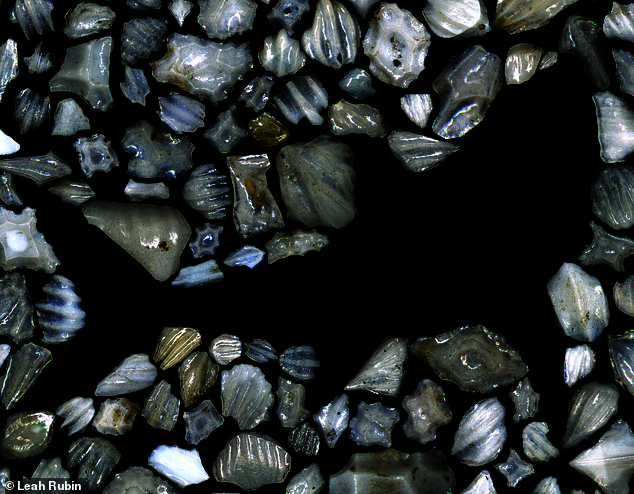 Sharks almost disappeared from the world’s oceans around 19 million years ago — with population numbers plummeting by more than 70 per cent — a study found. Pictured: a negative image of a shark made up of ‘denticles’, the serrations found on the teeth of sharks

‘We happened upon this extinction almost by accident,’ said paper author and palaeobiologist Elizabeth Sibert of Yale University in New Haven, Connecticut, who studies microfossil fish teeth and shark scales in deep-sea sediments.

‘We decided to generate an 85-million-year-long record of fish and shark abundance, just to get a sense of what the normal variability of that population looked like in the long term,’ she added.

‘What we found, though, was this sudden drop-off in shark abundance around 19 million years ago, and we knew we had to investigate further.’

While much of what is known about ancient marine species is derived from fossils that were preserved in shallow-water deposits, Dr Sibert and colleagues studied tiny teeth and scales found deep-sea sediment cores collected from around the globe.

The researchers found that more than 70 per cent of the world’s shark species died off, with the death toll higher among those species that lived out in the open ocean in comparison with those that swim in coastal waters.

In fact, the team said, sharks suffered twice the losses in this episode than they did during the Cretaceous–Paleogene mass extinction event 66 million years ago, which wiped out three-quarters of all living species (including the dinosaurs).

A mystery lies in the fact that there was no known climate calamity or other ecosystem disruption at the time the shark populations plummeted. 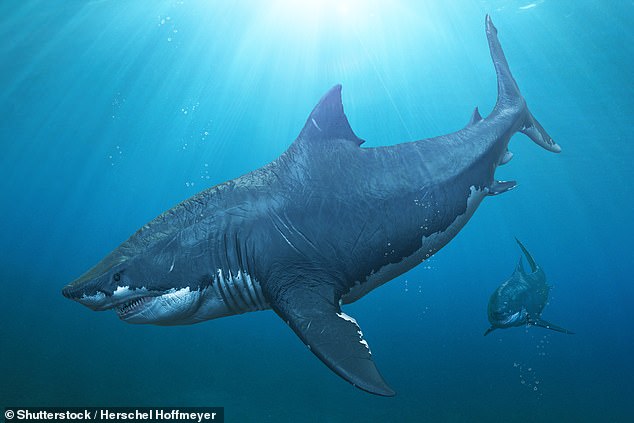 Researchers led from Yale University constructed a record of shark diversity and abundance spanning the last 40 million years based on fossil teeth and scales. Pictured: Megalodon, an extinct species of shark that lived between around 23–3.6 million years ago

Yet, she added, ‘it completely transformed the nature of what it means to be a predator living in the open ocean.’

‘The current state of declining shark populations is certainly cause for concern,’ added paper author Leah Rubin of the State University of New York.

The study, she said, ‘helps put these declines in the context of shark populations through the last 40 million years.’

‘This context is a vital first step in understanding what repercussions may follow dramatic declines in these top marine predators in modern times.’

Yale palaeontologist Pincelli Hull — who was not involved in the study — said future work should look ‘to understand this time period and its implications for not only the rise of modern ecosystems, but the causes of major collapses in shark diversity.’

‘It represents a major change in ocean ecosystems at a time that was previously thought to be unremarkable.’

Further research may be able to confirm whether the extinction event caused the remaining sharks to avoid the open ocean — and perhaps explain why their populations did not rebound in the wake of the die-off.

HOW SHARKS EARNED THEIR RUTHLESS REPUTATION

Sharks are the most efficient predators on earth and have long terrified humans.

Their basic design has never really changed over the course of 200million years and they are considered to be complex and intelligent.

Their teeth are fear factor number one, with the great white’s teeth growing up to two-and-a-half inches in length.

Their prey are impaled on the pointed teeth of the lower jaw where they saw away sections of the flesh. The serrated edges of the teeth help with this process.

Their teeth are brittle and are constantly breaking off but are also constantly regrowing and on average there are 15 rows of teeth present in the mouth at one time.

Sharks are the most efficient predators on earth. Their basic design has never really changed over the course of 200million years

They are very fast in the water compared to humans with the mako shark able to reach an incredible 60mph in bursts.

The great white can reach speeds of 25mph.

By comparison, 5mph is the fastest a human being can reach.

A shark’s power and size terrifies us, too.

The great white shark can grow up to 20 feet and while it has no particular taste for humans even an exploratory bite is enough to cut a man in half.

Most sharks release a human after its first bite but sometimes, that’s all it take to kill a person.

However, sharks have far more reason to be afraid of humans. We kill up to a million of them a year, often just cutting off their fins to make into soup and throwing the rest of the shark back into the water, where it starves or drowns.