The historic mission, operated by billionaire Elon Musk’s firm SpaceX, will launch from NASA’s Kennedy Space Center in Florida at some point after 8:02pm EDT on Wednesday (1:02am BST Thursday) during a five-hour window.

An ‘accomplished jet pilot’ according to Inspiration4’s website, Isaacman, the commander of the mission, is funding the trip in a private deal made with SpaceX.

The team will be aboard a specially modified version of SpaceX’s capsule Crew Dragon, featuring a domed window or ‘Cupola’ to allow some sensational views of space.

Inspiration4 is the latest in a line of ambitious space flights heralded by billionaire CEOs, following the likes of Sir Richard Branson’s Virgin Galactic and Jeff Bezos’ Blue Origin earlier this summer. 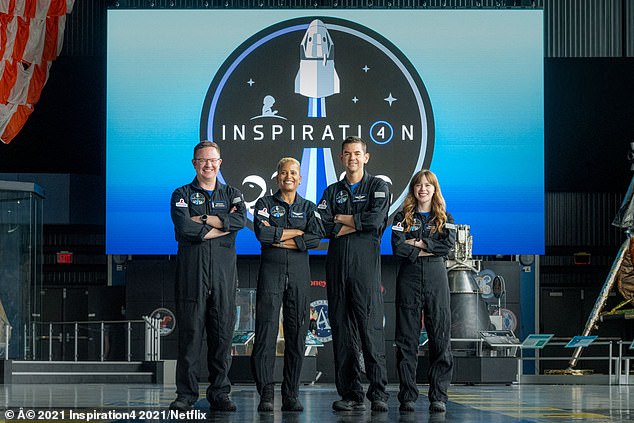 The Inspiration4 crew (L-R) Chris Sembroski, Sian Proctor, Jared Isaacman and Hayley Arceneaux pose for a photo. – The Inspiration4 mission will send only civilians into space for several days aboard a SpaceX rocket

Last week, the Inspiration4 website confirmed that the four-person team had arrived in Florida on Thursday, a day after completing their final day of astronaut training at SpaceX’s headquarters in Hawthorne, California.

‘After arrival, the teams from SpaceX and Inspiration4 also met yesterday evening for a follow-on flight readiness review and an initial weather briefing,’ it said.

The website also confirmed on Monday that the five-hour launch window opens at 8:02pm EDT on Wednesday.

‘If needed for any reason, a backup window is available opening at 8:05pm EDT on Thursday, September 16,’ it added.

The US Space Force’s 45th Weather Squadron predicts a 70 per cent chance of favourable conditions for liftoff.

The four-person team under the command of Isaacman will be launched aboard SpaceX’s Falcon 9 rocket.

Isaacman is the CEO of Shift4 Payments, while Proctor is a community college educator in Arizona, Chris Sembroski a former Air Force missileman from Washington and Hayley Arceneaux a physician assistant at St. Jude Children’s Research Hospital in Tennessee.

Inspiration4 is designed primarily to raise awareness and support for the pediatric cancer center, which successfully treated Arceneaux for bone cancer when she was a child.

Although this is not the first time civilians have travelled to space, it is the first mission manned solely by civilians.

Crew Dragon will only orbit Earth for three days, completing one orbit every 90 minutes along a customised flight path as it travels at more than 17,000 miles per hour.

Its progress will be carefully monitored at every step by SpaceX mission control.

SpaceX says: ‘Upon conclusion of the mission, Dragon will reenter Earth’s atmosphere for a soft water landing off the coast of Florida.’ 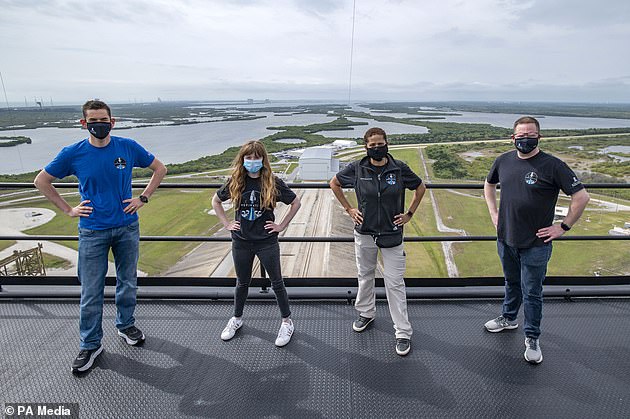 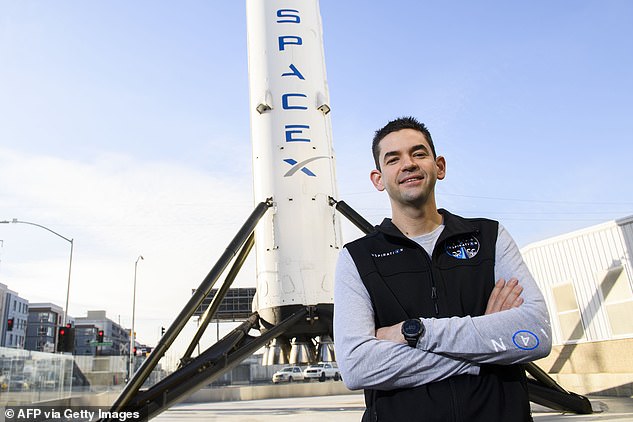 The Inspiration4 crew have received commercial astronaut training by SpaceX on the Falcon 9 launch vehicle and Dragon spacecraft, orbital mechanics, operating in low gravity and other forms of stress testing before travelling.

‘There will be several months of training,’ Isaacman previously told DailyMail.com.

Crew Dragon’s 365lbs cargo capacity has been allocated for both crew essentials as well as scientific equipment dedicated to micro-gravity research and experimentation.

‘While we are up there we are going to bring payloads and do experiments,’ Isaacman said.

‘We offered to take payloads from St. Jude’s and other places because the wait list is extremely long.’

Following the announcement of Inspiration4 back in February, Musk told NBC News: ‘Any mission where there’s a crew onboard makes me nervous. The risk is not zero.

‘When you’ve got a brand new mode of transportation, you have to have pioneers. Things are expensive at first, and as you’re able to increase the launch rate, increase the production rate, refine the technology, it becomes less expensive and accessible to more people.

‘We’ll all be with Jared on the journey and we’ll be seeing it in real time. It’s an important milestone on the road toward making access to space more affordable.’ 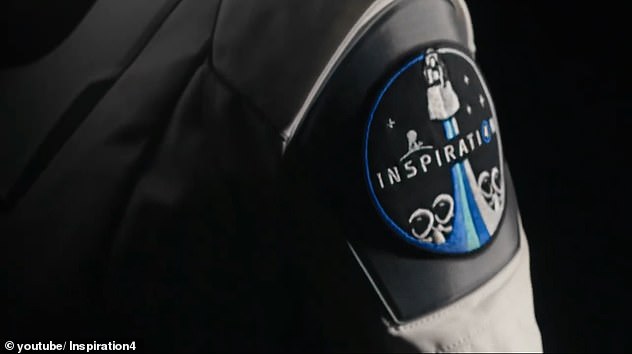 A shot of the Inspiration4 suit, adorned with a patch representing the mission’s four pillars – leadership, hope, generosity and prosperity

A few days later, a 30-second advertisement was broadcast during the SuperBowl break, directing potential Inspiration4 crew members to apply on its website.

The ad displayed close-up shots of a SpaceX Suit, adorned with a patch representing the mission’s four pillars – leadership, hope, generosity and prosperity.

These four pillars also correspond to the four members of the crew – Isaacman, Arceneaux, Sembroski and Proctor, respectively, according to the Inspiration4 website.

Bezos jetted off to space on July 20 aboard a New Shepard rocket with his brother Mark Bezos, as well as Dutch 18-year-old Oliver Daemen, who became the youngest person in space, and former NASA trainee Wally Funk, 82, who became the oldest.

The Blue Origin founder reached 13 miles higher than billionaire rival Sir Richard Branson who flew to space during his own manned test flight on July 11.

The difference with SpaceX’s mission on Wednesday is that the company boss, Musk, won’t be flying to space himself.

Inspiration4 also plans to go into orbit – further than either Virgin Galactic or Blue Origin.

The three ultra-wealthy CEOs envisage an era where members of the public pay exorbitant amounts for a holiday in space – a phenomenon frequently dubbed ‘space tourism’.

In the age of climate change and and a viral pandemic, some believe there are more important issues that jetting off on luxury space flights.

Writing for MailOnline in July, broadcaster John Humphrys said: ‘Let’s try to swallow our envy that billionaires get to cruise the cosmos while most of us can’t even manage a week in Crete.’

He called the current space race an ‘utterly pointless exercise in inflating egos that already dwarf the size of the average planet’.