Deep breathing and Tai Chi movements can be as beneficial as normal exercise in tackling middle-aged spread, study shows

The subtle movements and deep breathing of Tai Chi can be as beneficial as normal exercise in tackling middle-aged spread, according to a new study.

Tai chi is a form of ‘mind-body exercise’ that is described as ‘meditation in motion’ practiced by millions around the world to improve health and mindfulness.

Volunteers either did no exercise, aerobic exercise or tai chi for 12 weeks and had their waist size tracked by University of California in Los Angeles researchers.

They found that tai chi was as effective as conventional exercises when reducing the waist circumference in obese middle-aged and older adults. 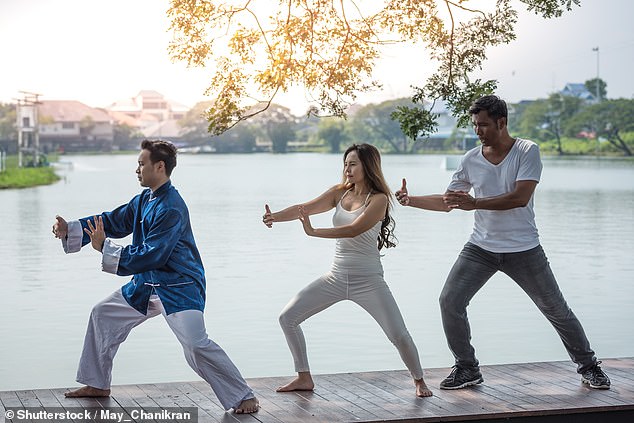 The subtle movements and deep breathing of Tai Chi can be as beneficial as normal exercise in tackling middle-aged spread, according to a new study

The team focused on people with a condition known as central obesity, that is weight carried predominantly around the midsection.

This is a major manifestation of metabolic syndrome and a common health problem in middle-aged adults. The findings are published in Annals of Internal Medicine.

The team also involved researchers from the University of Hong Kong, who carried out the experiment by randomly assigning more than 500 adults over 50 with central obesity to a regimen of tai chi, conventional exercise, or no exercise.

Participants in the tai chi and exercise groups met for instructor-led workouts for one hour three times a week for 12 weeks.

Waist circumference and other indicators of metabolic health were measured at baseline, 12 weeks, and 38 weeks. 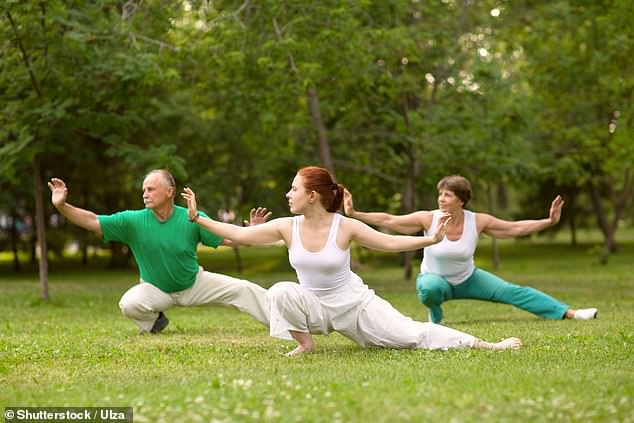 The researchers found that both the tai chi intervention and conventional exercise intervention group had reductions in waist circumference, relative to control.

The reduction in waist circumference had a favourable impact on good cholesterol, but did not translate into detectable differences in glucose or blood pressure.

According to the study authors, their findings are good news for middle-aged and older adults who have central obesity but may be averse to conventional exercise due to preference or limited mobility.

The findings have been published in the journal Annals of Internal Medicine.

Originally developed as a martial art in 13th-century China, tai chi is now practised around the world as a health-promoting exercise.

What are the health benefits of tai chi?

While there’s scope for more rigorous research on tai chi’s health benefits, studies have shown that it can help people aged 65 and over to reduce stress, improve posture, balance and general mobility, and increase muscle strength in the legs.

Am I too old for tai chi?

No, tai chi is commonly performed as a low-impact exercise, which means it won’t put much pressure on your bones and joints. Most people should be able to do it.

Is tai chi suitable for me?

Get advice from your GP before starting tai chi if you have any health concerns or an existing health condition. You may need to take certain precautions if you’re pregnant, have a hernia, back pain or severe osteoporosis.

Don’t I need to be fit to do tai chi?

No, tai chi is for everyone. It is ideal for inactive older people wanting to raise their activity levels gently and gradually. Also, many of the tai chi movements can be adapted to people with a disability, including wheelchair users.

Can I injure myself doing tai chi?

Tai chi is essentially a gentle activity that is unlikely to cause injury if done correctly. The exercises involve lots of flowing, easy movements that don’t stress the joints or muscles.

Tips on getting started

It’s a good idea to watch a class or attend a free taster session before signing up for a course. If you have a medical condition or any health concerns, or haven’t exercised for a long time, speak to your GP before you start tai chi.

Are there different styles of tai chi?

Yes, such as yang, chen and wu. Some teachers often practise a combination of styles. The main differences between the different tai chi styles are in the speed of movement and the way the body holds the postures.

Tai chi is characterised by its slow, graceful, continuous movements that are gentle on the joints and muscles. Done correctly, you’ll find that the tai chi poses flow smoothly from one into another. Many movements are completed with bent knees in a squat-like position.