Home » The Fairy Circles Mystery Gets a New Suspect

In the Australian outback, certain grasses grow in eerie rings, with ramparts of dusty green standing at the edge of wide circles of bare red dirt. Often described as “fairy circles,” these rings of spinifex grass resemble structures first spotted in the Namibian desert, both creating enormous honeycomb patterns across the landscape that really pop out in aerial photos. In Namibia, scientists have deployed cameras on fishing rods, observed termite colonies and even used mathematical models to try to explain how this phenomenon arises.

A small study published last month in the Australian Journal of Botany suggests that microbes living in the soil may contribute to the rings’ formation in Australia, rendering the dirt within the ring hostile to new seedlings and the dirt beyond the ring hospitable.

Spinifex grasses start out as small round hummocks, said Angela Moles, an ecologist at the University of New South Wales and an author of the new paper. Then, as new seedlings sprout outward, the plants in the middle die, leading to the ring shape. Researchers have explored whether the bare inner soil becomes depleted of nutrients; whether it is too dry or compacted for new growth; and whether insects might be destroying the spinifex. But a consensus on what is driving the formation of rings has yet to emerge.

Dr. Moles had heard of a small European swamp grass that grew in a ring pattern, a result of a buildup of soil pathogens in the middle. She and Neil Ross, a graduate student in her lab, were curious whether sterilizing the soil from inside rings, thus killing any microbial organisms there, would make it easier for plants to grow in it. If so, that would imply that microbes were involved.

Mr. Ross carefully scooped soil from the interior of rings in the desert of Australia’s Northern Territory, and from outside the rings as well. Back at the university’s greenhouses, he sterilized some of each. He then planted some spinifex seeds in pots of microbe-free soils and some in unaltered soils. 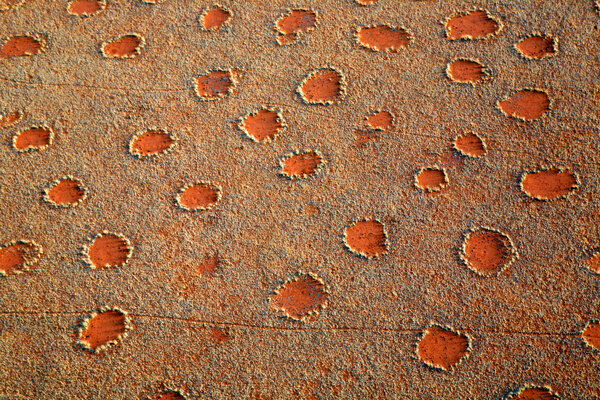 This fits with earlier research suggesting that as plants grow, pathogens that attack them take up residence in the soil around their roots. These pathogens may be tolerable for adult plants but unpleasant for fragile new seedlings, a difference that may help explain why in rain forests, trees of the same species are seldom found near each other.

“Germinating is a really scary thing for a seed,” Dr. Moles said. “For a while there, they don’t have a lot of resources.”

If new spinifex grasses can’t handle the pathogens in the soil at the center of their clump, they may sprout instead just outside of it, leading to that signature ring pattern.

However, the researchers also found that sterilized soil from outside the ring was just as bad for new sprouts as untreated inner soil. Dr. Moles speculates that some other soil microbes can also help seedlings. Killing potential pathogens from inside the ring makes that soil livable again, she says, but killing everything in the soil outside it might have detrimental effects as well.

The researchers did not attempt to culture bacteria or other microorganisms from the soil, so they are not sure what tiny ecologies have sprung up around these rings in the desert and exactly how they change over time. But in the ongoing scientific discussion of these fairy rings, microbes may have just joined the party.