The flood-proof home of the future: Designers envisage what houses will look like by 2072 amid rising sea levels – including buoyant foundations, inflatable rafts and kitchens on the TOP floor

Having an upstairs kitchen and several inflatable rafts outside is not many people’s vision of a dream home.

But this ‘flood-proof’ design concept may one day be necessary because of rising sea levels across Britain.

Not only that, but a new report warns that as many as 25,550 new homes are set to be built in flash flood risk areas without proper drainage in place.

It has led experts to predict that by 2072 houses will be equipped with escape routes that include inflatable rafts, while also being built with buoyant foundations that allow them to float on rising floodwater. 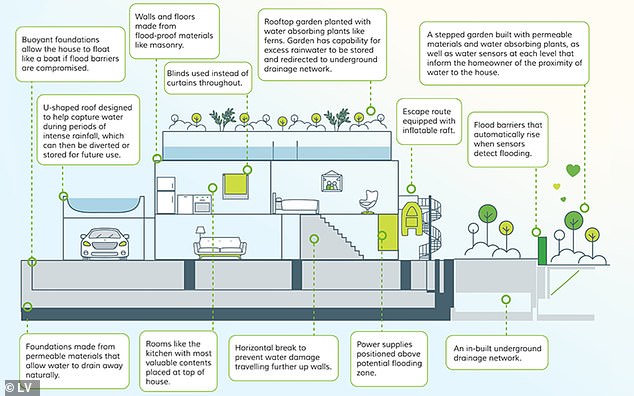 The future? Having an upstairs kitchen and several inflatable rafts outside is not many people’s vision of a dream home. But this ‘flood-proof’ design concept may one day be necessary because of rising sea levels across Britain 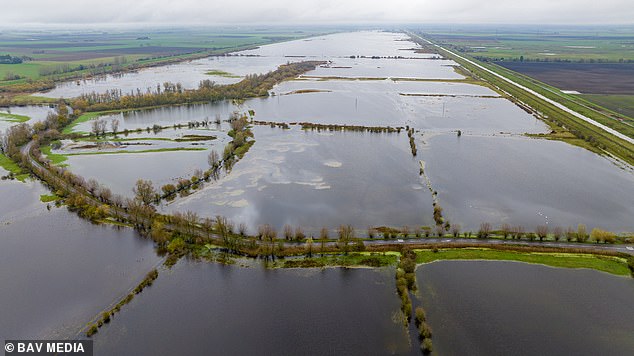 Flash floods are currently causing chaos with 50 flood alerts and warnings issued across England ahead of further downpours. Pictured is the A1101 surrounded by flooded fields in Welney, Norfolk on Sunday

WHAT FEATURES WOULD A ‘FLOOD-PROOF’ HOME HAVE?

They could also have gardens with water sensors and flood barriers.

Kitchens will be located on the top floor of houses and power supplies also positioned high up because of the risk of flood water.

Walls and floors will be made from flood-resistant materials such as masonry, while excess rainwater could be redirected from roofs to an underground drainage network and rooftop gardens will feature water-absorbing plants like ferns.

Insurer LV=GI recruited the duo to highlight the extreme measures that may be required by homeowners to combat floods in 50 years’ time amid drastic climate change.

In total, more than five million properties in England are already at risk from flooding, while the Environment Agency has said that if current planning outcomes continue, this number could double in the next 50 years.

National planning policy does not currently require sustainable drainage systems to be provided for smaller developments of up to nine homes – even when builds are planned in flood risk areas.

Between June 2021 and June 2022, planning permission was sought to build 35,282 homes in such developments in flood risk areas, a new study for LV=GI and think-tank Localis found.

Around three quarters of these applications are expected to succeed, which would create about 25,550 new homes that will put extra pressure on already overstretched drainage systems.

Insurance claims to LV=GI from homeowners for surface water flooding have soared by 211 per cent since 2017 – at an average value of £32,000 per claim.

In a survey of 2,000 UK homeowners this month, the firm also found that three quarters are worried about the extent of flooding in the next 50 years.

Six in ten say they fear for future generations and a third – 32 per cent – are concerned that flooding could make their area uninhabitable in the future. 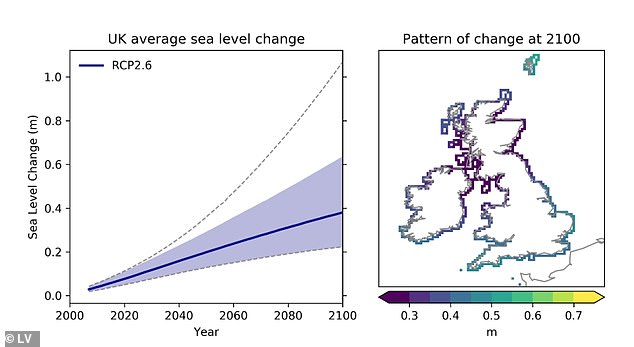 In total, more than five million properties in England are already at risk from flooding, while the Environment Agency has said that if current planning outcomes continue, this number could double in the next 50 years.  This graphic shows how sea levels are projected to rise and the impact it would have on Britain up to 2100 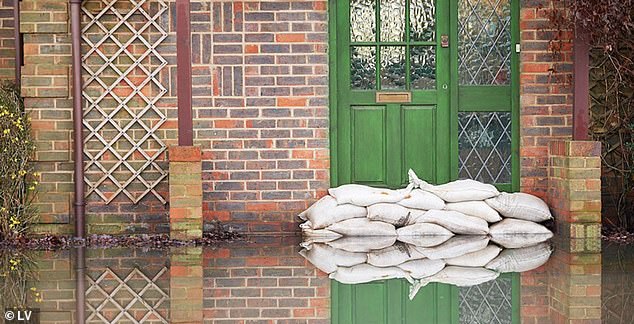 Over a quarter – 28 per cent – fear their home could be flooded in torrential downpours this winter.

Amphibious houses bring together standard components from the construction and marine industries to find a solution to flooding.

They rest on the ground but whenever a flood occurs, the entire building rises up in its dock to float, buoyed by the floodwater.

A buoyancy system beneath the house displaces water to provide flotation as needed while a vertical guidance system allows the rising and falling house to return to exactly the same place upon descent.

‘In the not too distant future the public may find themselves needing to go to more and more radical lengths to protect their homes, livelihoods and loved ones from the potentially devastating impacts of flooding,’ Dr Neumann said.

‘The homes of the future could well require features such as underground drainage networks, built-in flood defences and even amphibious foundations to withstand the levels of flooding we could see in 50 years.’

LV=GI claims director Martin Milliner said: ‘As an insurer we see first-hand the very real and devastating impact flooding has on people’s lives.

‘While we know the building of more homes is necessary to combat the housing crisis, the country is becoming less resilient to more extreme weather and we must look at the future impact this will have on our homes.

‘It’s crucial property developers, insurers and local authorities work together to combat the problem before such extreme measures become necessary.’

PAVING OVER FRONT GARDEN FOR CARS TO PARK ON CAN TURN HOMES INTO FLOOD-RISK, EXPERTS WARN

Paving over the front garden to make space for cars could put your home at high risk of flooding, experts warn.

A report from the National Infrastructure Commission (NIC) has warned that 325,000 English homes are in high-risk flooding areas – meaning they have at least a 60 per cent chance of being flooded in the next 30 years.

It claims that the spread of watertight surfaces, such as paved-over gardens, could move a further 65,000 properties into the high-risk category by 2055.

The NIC says around £12billion of investment over the next 30 years will be necessary to stop 600,000 homes flooding due to inadequate drainage. 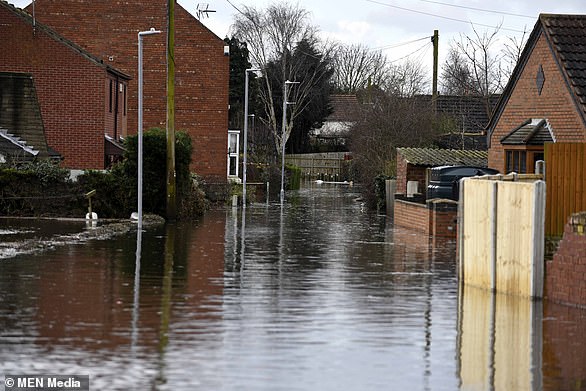 The National Infrastructure Commission (NIC) has warned that 325,000 English homes are in high-risk flooding areas. Pictured: Hull floods in June 2007

Computer forecasts suggest 250,000 properties could be moved out of the high risk category by better investment in drainage systems.

The report urges the Government to tackle the unplanned spread of paved surfaces, compel water firms to invest in drainage infrastructure and encourage the development of flood-proof housing.

Experts believe that by 2072, gardens will boast water sensors and flood barriers while homes will come equipped with means of escape such as inflatable rafts.