On early autumn afternoons across the temperate world, the midges are now gathering to swarm: clouds of tiny flies, wings lit by the sun like so many sparks, swirling in patterns too quick and complicated for the eye to follow but leaving a mental afterimage of order. Not a perfect order, but something more than chaos.

That impression of order is accurate, according to scientists who study such swarms: In the movements of midges, one can find the mathematical signatures of properties beyond what one would expect from a cloud of bugs. As a group, they behave like liquids or gases, and even exhibit the characteristics of “criticality,” that uncanny stage of matter at which radical transformation from one state to another occurs in a blink.

“Collective correlation can emancipate the system from its microscopic details,” said Dr. Andrea Cavagna, a physicist at the Institute for Complex Systems in Rome. A swarm is much more than its midges.

Before Dr. Cavagna and his partner, Dr. Irene Giardina, a theoretical physicist at La Sapienza University in Rome, turned their attention to midges, they studied starling flocks. Using high-speed video cameras to measure the trajectory of every bird in a murmuration, as starling flocks are called, the researchers discovered in 2009 that when one starling changes direction or speed, so do the birds nearest them, and in turn the birds nearest those. Each starling in a murmuration is thus linked, no matter how far apart.

In the parlance of statistical mechanics, this is known as a scale-free correlation. It is a property of criticality — what liquid undergoes at the point that it becomes a gas, or how particles in a lump of hot iron, when cooled to a specific temperature, change orientation in unison and create a magnet.

This year, Dr. Cavagna and Dr. Giardina’s work on starlings earned them the prestigious Max Delbrück Prize in Biological Physics. And during the early years of their research, while taking their young children to Rome’s parks, they marveled at the swarms of midges flitting above the grass and started wondering about them, too.

Midge swarms did not appear to be as tight-knit as murmurations, yet neither did the insects seem to move completely independent of each other. “We had the idea that the same kind of model could also be used to describe midge swarms,” Dr. Giardina said.

The researchers trained their cameras on the swarms — no small feat, given the swarms’ evanescence and the intrusive curiosity of bystanders — and discovered that, like starlings in a flock, midges in a swarm are collectively correlated. 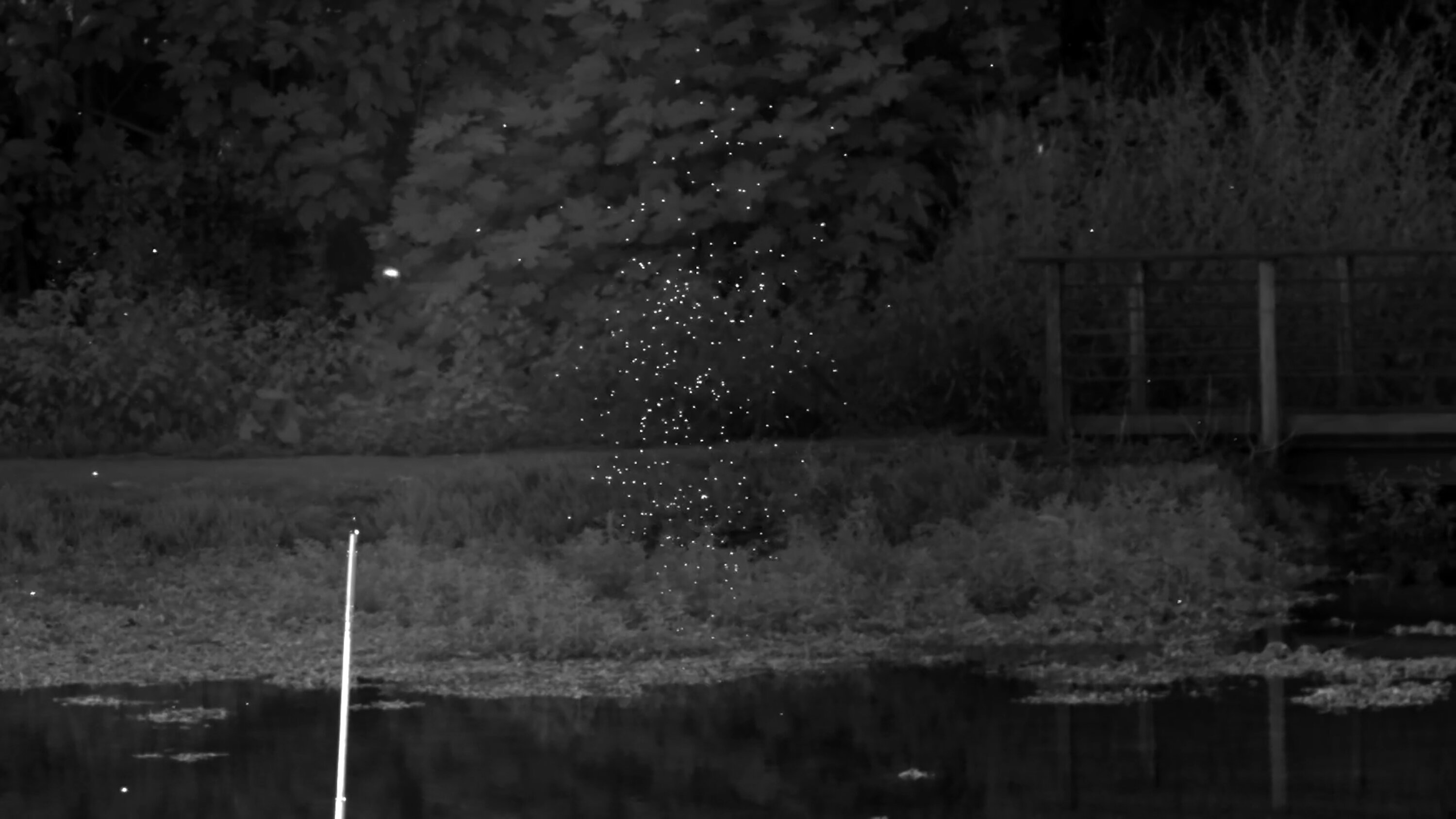 They are not all going in the same direction in near-perfect synchrony, nor is the degree of correlation as strong as in starlings. There can also be subgroups within a swarm that move in different directions, with individuals switching from one subgroup to another — hence the appearance of disorder. Nevertheless, the midges are all entangled.

The researchers also found that as swarms increase in size, they become denser and the midges’ flights become more closely correlated. This is likely a function of how midges respond to the sound of their neighbors’ buzzing wings, and it allows them to maintain an optimal degree of correlation.

“It’s like the system self-organizes in such a way as to have the maximum possible response,” Dr. Giardina said. Dr. Cavagna described it as a way to “surf the maximum of susceptibility,” enabling sudden, coordinated movements.

“The closest models in physical systems are magnets,” Dr. Cavagna said; that is, the sudden collective shift in particle orientation just before magnetization. But he emphasized that swarming midges are not at that critical point, only near it.

This may be a physical limitation, he noted. True criticality only occurs in systems with many more units than are found in a swarm. A one-gram iron magnet contains roughly 10,000,000,000,000,000,000,000 iron atoms, whereas a decently sized midge swarm contains only several hundred midges.

It is also possible that reaching criticality would be catastrophic for them, rendering the swarm hypersensitive to every perturbation, puff of air or whatever the midge equivalent of a sneeze is. “The best trade-off is to be close to critical,” said Dr. Miguel Muñoz, a physicist at the University of Granada in Spain, who has followed the research closely. “You take advantage of the responsiveness but are not too close, because if you’re too close, you respond to anything.”

The potential benefits of swarming are evident in murmurations, whose synchronized twists and turns may help starlings to evade predators.

Midge swarms, which consist almost entirely of males, also serve a reproductive function, with females entering and taking mates in midair. Perhaps operating at near criticality is conducive to midge romance? That is unknown. It is also possible that swarm properties are not adaptive but simply “a side effect of the mathematics,” Dr. Cavagna said.

Dr. Muñoz considers Dr. Cavagna and Dr. Giardina’s findings “convincing,” but some scientists take issue. In his own studies of captive midges, Dr. Nicholas Ouellette, a physicist at Stanford University, and his colleagues found that correlations were not quick to arise. When they did arise, the correlations did not fit the framework of criticality. 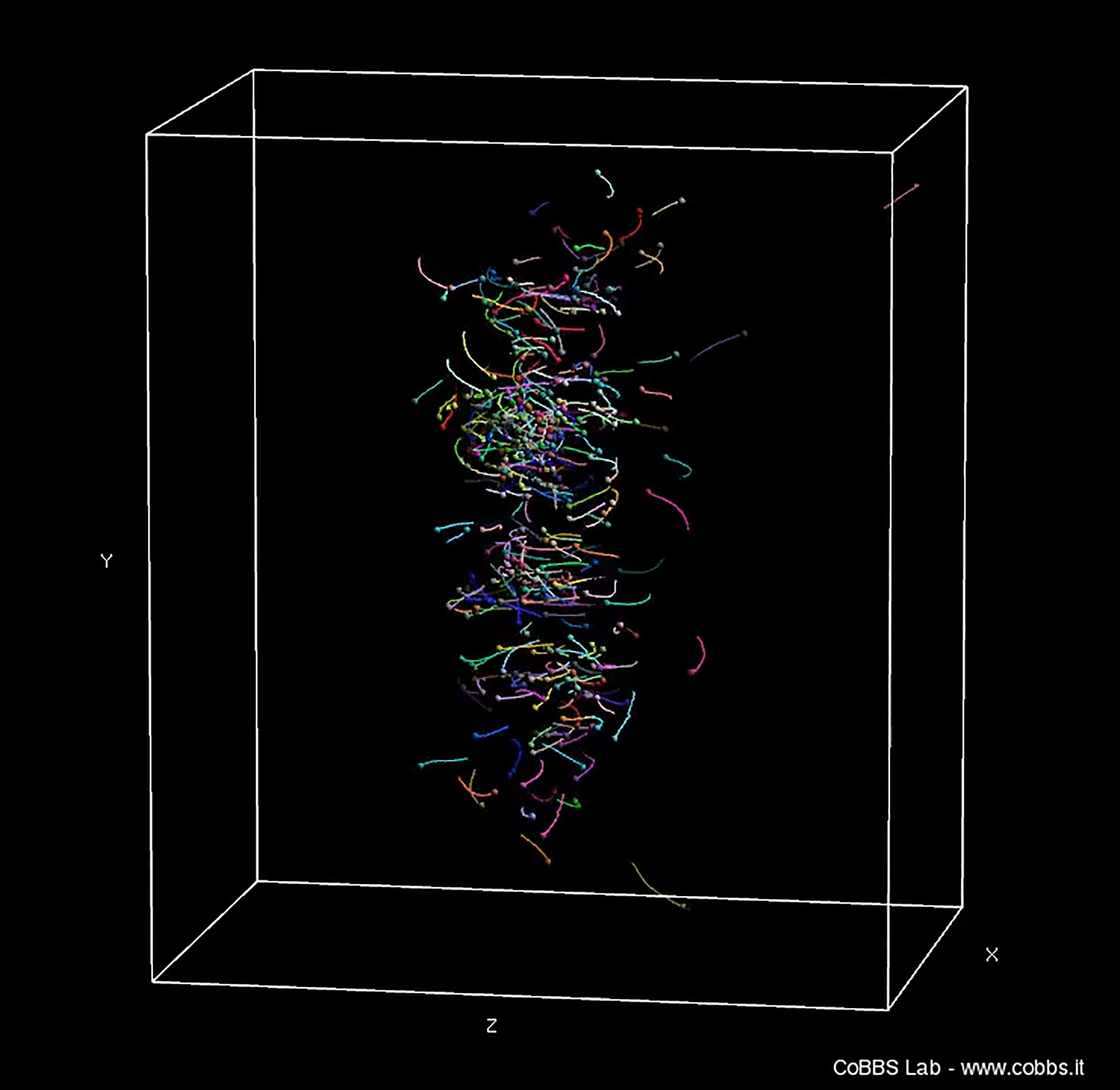 The swarms were still intriguing, though. In a 2017 paper in Physical Review Letters, Dr. Ouellette and his co-authors described them as containing midges whose flight patterns created a condensed core surrounded by a layer of vapor.

And when the team pulled apart the visual landmarks over which a swarm formed, the swarm split in two. (In nature, the landmarks might be logs or leaves; in the lab, they were pieces of paper.) In doing so, the swarms behaved not like a fluid but like a solid, “appearing to be under increasing tension before eventually snapping,” said Dr. Andrew Reynolds, a theoretical biologist at Rothamstead Research in Britain.

“Different stimuli can induce different behaviors,” Dr. Reynolds said. He was not involved in the Stanford experiment but has collaborated on others with Dr. Ouellette, including one in which a laboratory swarm wobbled and smushed like Jell-O. Earlier this year, Dr. Ouellette and his collaborators described how swarms seem to be governed by the laws of thermodynamics.

Such findings suggest that a swarm can be understood as a singular entity rather than as a collection of individual insects, the way a quartz crystal is perceived as a discrete object rather than as trillions of atoms. “You’re used to thinking of it as one thing, because you can’t see what it’s made of,” Dr. Ouellette said. “These swarms have well-defined material properties that are not properties of the individuals, but of the group.”

As for disagreements over correlation and criticality, those will ultimately be settled with more research. It is also possible that both groups are right: Perhaps midge swarms may exist, depending on size and circumstance, in all the forms that researchers have described.

Wherever that scientific dust settles, one can appreciate how marvelous swarms are and the tantalizing glimpse they provide of principles underlying seemingly disparate phenomena. Dr. Muñoz’s interest in the research was sparked by findings of criticality in neural networks and cellular function; there may be similarities between the dynamics of swarms and the brain turning cellular excitation into an image, or a genome expressing the instructions in its DNA.

“Criticality could be a unifying principle,” he said, one that generates exquisite coordination and complexity from simple components, and that has been harnessed many times by evolution. And even if swarms are not near-critical, the connections are still profound.

“I now see great beauty and subtlety whenever I see a midge swarm,” Dr. Reynolds said. “They stop me in my tracks.”