Home » The Outsized Influence of Teen T. Rex and Other Young Dinosaurs

Adolescence is a time of great change for most of us. But it was particularly volatile for young T. rexes. Before they became fearsome, bone-crushing adults, they had to pass through a number of stages — two-foot hatchling, gangly preteen, bulky young adult. At each phase, they hunted different prey and filled different niches.

As a new study in Science reveals, juvenile T. rexes and the youth of other large carnivores called megatheropods transformed their communities as they fumbled through their own physical changes. Their rapid shifts in size and roles shaped their ecosystems, the study suggests, and could help to explain some of the perplexing mysteries of dinosaurdom, from the relative lack of species diversity to the strange preponderance of huge body sizes.

Considering dinosaurs ruled the planet for 179 million years, there were fewer distinct species than you might expect. While today’s world is positively fuzzy with mammals — at the moment, nearly 7,000 different types — we only know of about 1,500 non-avian dinosaur species, said Kat Schroeder, a Ph.D. student at the University of New Mexico and a co-author of the new paper.

There are also “some very weird things about their mass distribution,” Ms. Schroeder said. Within contemporary animal classes, small-bodied species tend to vastly outnumber big ones. (For instance, there are currently twenty species of elephant shrew, and just three species of elephant.) But for dinosaurs, it’s the opposite: “Most of them are large,” she said.

Some paleontologists looking into these dynamics over the years have tentatively blamed the youth. Juvenile T. rexes were light and agile before they leveled up into the adults we’re more familiar with. (The physical discrepancies between younger and older T. rexes can be so vast that experts have argued over whether certain specimens are different species altogether, rather than different ages.) Other megatheropods, including abelisaurs and tarbosaurs, also grew from turkey-like hatchlings to bus-sized behemoths over the course of their lives.

For this reason, the presence of just one of these species in an ecosystem meant that “a large number of different-sized predators existed” there, hunting progressively larger prey as they themselves grew up, said Dr. Marcus Clauss, head of research at the Clinic for Zoo Animals in Zurich, who has published theoretical work on this concept but was not involved in the new study. Perhaps the ecological real estate that might have been filled by mid-sized dinosaur species was instead taken up by these in-betweeners. 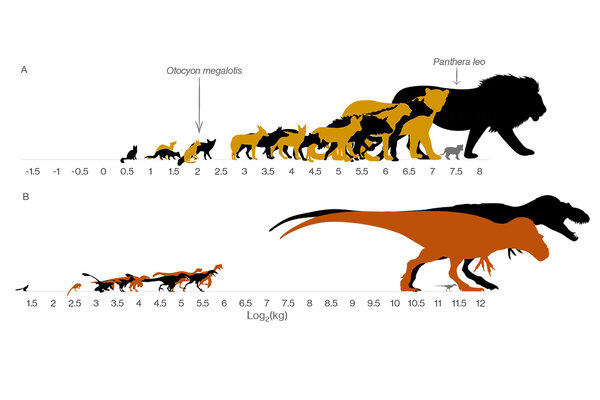 To test this hypothesis, Ms. Schroeder and her co-authors examined 43 different dinosaur communities. By cross-referencing scientific papers with a public paleobiology database, they deduced which species were likely to have coexisted in space and time. They then sorted the species in each community by size.

In communities with megatheropods, Ms. Schroeder and colleagues found what they call a “carnivore gap”: a large swath of medium-size niches that were empty. For instance, the Hell Creek Formation, a well-studied fossil area that stretches from modern day Utah to Alberta, was once home to 630-pound grown-up dromaeosaurs, 7-ton adult T. rexes — and no mature meat-eaters in between.

Though the gap in Hell Creek is particularly extreme, most of the communities with megatheropods the researchers studied had no carnivores between 220 and 660 pounds. (For a modern comparison, this is as if the adult carnivores in South Africa’s Kruger National Park were all either larger than a lion or smaller than a bat-eared fox, they write.)

The carnivore gaps were more pronounced in these individual communities than in those that lacked megatheropods, supporting the idea that the young megatheropods were filling them, Ms. Schroeder said. The gaps also didn’t apply to herbivores. This suggests that the juvenile carnivores’ inability to hunt the same food as adults forced them to carve out their own niche, which had a strong influence on the ecosystem, she said. (A baby sauropod, in contrast, could munch on the bottom branches of a tree while an adult ate the top.)

The new study “represents an enormous feat in testing this concept,” Dr. Clauss said. Theoretically, he said, these same dynamics might have made it harder for dinosaurs to repopulate large niches after a mass extinction event: When the big dinosaurs died, the relative lack of small and medium-sized species meant that mammals were better positioned to take over.

Broad analyses like this one are “truly transforming the field” of paleontology, said Lawrence M. Witmer, a professor of anatomy and paleontology at Ohio University who was not involved in the study.

“The notion that youngsters were different kinds of predators than their monster parents was out there,” Dr. Witmer said. But while many paleontologists had been focusing on one species at a time in addressing this question, this new study instead connects “thousands of dots,” he said, to show “how whole communities of dinosaurs evolved.”

At the same time, the paucity of juvenile dinosaur fossils makes it difficult to precisely understand the roles those youths played, said David Hone, a zoologist at Queen Mary University of London who has used similar methods to study dinosaur size distribution.

“Knowing that juveniles filled a general niche space and actually being able to do anything with that information are two different things,” he said.

Young dinos were a big part of this. “If you were transported to the Cretaceous, it would be fairly rare to see a big adult Tyrannosaurus,” she said. But juveniles would be “all over the place” — growing, changing and leaving their mark.