Home » These Rocks Made a 1,000-Mile Trek. Did Dinosaurs Carry Them?

In the summer of 2017, Joshua Miller, then an undergraduate at Augustana College in Illinois, visited a field research camp in Wyoming and picked up some rocks. Rounded at the edges and the size of small fists, they were out of place amid the fine-grained mudrock that had surrounded them, and Mr. Malone asked his father, David Malone, a geologist at Illinois State University who led the dig at the site, if he knew where the rocks had come from.

Four years later, the two have developed a surprising answer.

In a study published earlier this year in the journal Terra Nova, the Malones with colleagues say the stones came from a rock formation in southern Wisconsin about 1,000 miles to the east of where they were found. What’s even more surprising is their hypothesis for how the rocks made that journey: The researchers say they were carried in the guts of long-neck dinosaurs.

These animals, known as sauropods, reached lengths of over 100 feet and weights of 40 tons, and regularly swallowed stones known as gastroliths, perhaps to help them digest plants, just as some birds and reptiles do today. The hypothesis would explain how the rocks acquired their smooth and rounded textures. But questions remain about whether they really made the whole journey in the bellies of these great beasts.

The gastroliths were found in Jurassic-aged mudstones in a rock formation called the Morisson. A rainbow of pinks and reds, the Morisson formation brims with dinosaur fossils, including those of sauropods, such as Barosaurus and Diplodocus, as well as meat-eaters like Allosaurus.

But the rocks, which are similar to gastroliths dug up elsewhere, were found on their own without any dinosaur remnants. To get a clue as to how they had ended up in modern-day Wyoming, the team crushed the rocks to retrieve and date the zircon crystals contained inside, a bit like studying ancient fingerprints.

“What we found was that the zircon ages inside these gastroliths have distinct age spectra that matched what the ages were in the rocks in southern Wisconsin,” said Mr. Malone, who’s now a doctoral student studying geology at the University of Texas at Austin. “We used that to hypothesize that these rocks were ingested somewhere in southern Wisconsin and then transported to Wyoming in the belly of a dinosaur.”

He added, “There hasn’t really been a study like this before that suggests long-distance dinosaur migration using this technique, so it was a really exciting moment for us.” 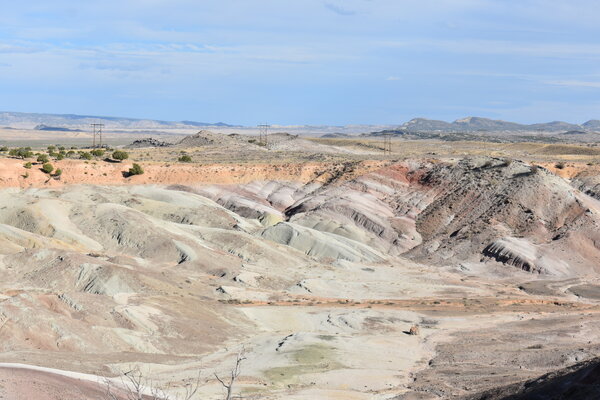 The Wisconsin-Wyoming connection hints at a trek hundreds of miles longer than previous estimates for sauropod migrations. Changing seasons can drive migrations as animals relocate in search of food and water. And sauropods in particular, says Michael D’Emic, a vertebrate paleontologist at Adelphi University in New York and a co-author of the study, would have needed gargantuan amounts of these resources to sustain their gargantuan lives.

“Sauropods grew quickly to reach their unparalleled sizes — on par with the rates that large mammals grow today,” he said. “This means that their caloric needs were immense, so given the highly seasonal environments they lived in, it’s not surprising that they would have had to migrate long distances in search of food.”

But other scientists say that because the rocks were not found alongside any actual dinosaur remains, the paper’s hypothesis will need more evidence to be proven correct.

“Unfortunately, we have no real evidence that these clasts are indeed former gastroliths,” said Oliver Wings, a geologist and vertebrate paleontologist at Martin Luther University Halle-Wittenberg in Germany. “We cannot exclude the possibility of transport of the stones in the bellies of dinosaurs, but it remains just one possibility of several.”

Nevertheless, Dr. Wings thinks the team’s new technique swings the door open for paleontologists to date other gastroliths, especially those found preserved with actual dinosaur skeletons. “It would be amazing if they could use that method on genuine gastroliths,” he said.

However the rounded rocks got to Wyoming, their discovery helped carry Mr. Malone into a family tradition of studying geology.

“I kind of rejected geology for the first 19 years of my life,” he said. “It wasn’t until this project, and being out there at that field camp that I kind of started to get interested in maybe taking that direction in my life.”