Home » Science » Time won't be kind to most of Marvel's superheroes, study reveals

Time won’t be kind to most of Marvel’s superheroes! Spiderman, Hulk and Black Widow would all suffer chronic conditions in old age – while Black Panther’s vegetarian diet and wealth would lead to healthy ageing, study claims

Time is not on the side of Marvel’s superheroes, and it isn’t just the risk of being snapped out of existence by Thanos, according to a new study of their health.

Researchers from the University of Queensland in Australia, who spent most of the last year in lockdown, reviewed 25 Marvel Cinematic Universe movies released between 2008 to 2021, focusing on the main characters health.

They looked at the type of activities the heroes regularly carried out, as well as their personal history and any ‘triggers’ in their past, such as abuse or surgery.

They found some will fare better than others in old age, with the likes of Iron Man and Black Panther benefiting from their extensive personal wealth and intelligence.

The biggest thing in favour of the health of Marvel’s elite is their ability to stay active and healthy, as well as the socialising they are able to do within the Avengers.

The problems come from some of the things that give them their powers, such as past trauma, or in the case of Black Panther, the substance he uses to get his power. 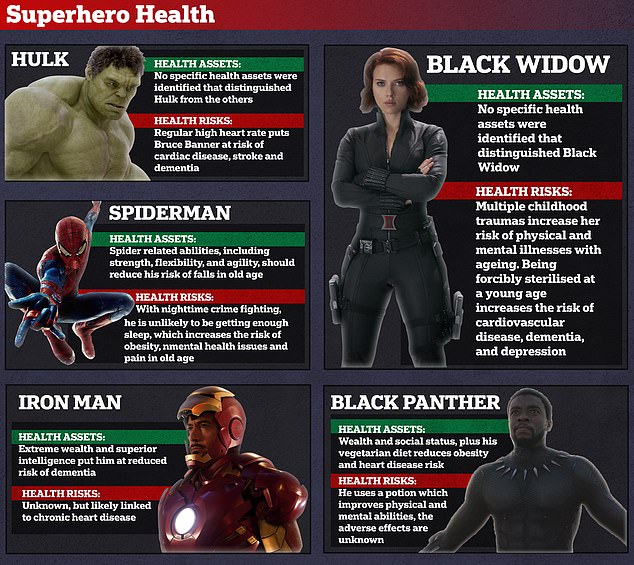 Time is not on the side of Marvel’s superheroes, and it isn’t just the risk of being snapped out of existence by Thanos, according to a new study of their health 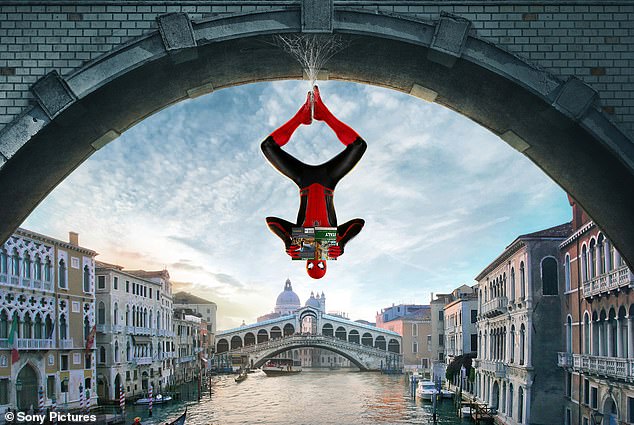 Spiderman (Peter Parker) is unlikely to be getting enough sleep, which increases the risk of obesity, mental health issues and pain in old age 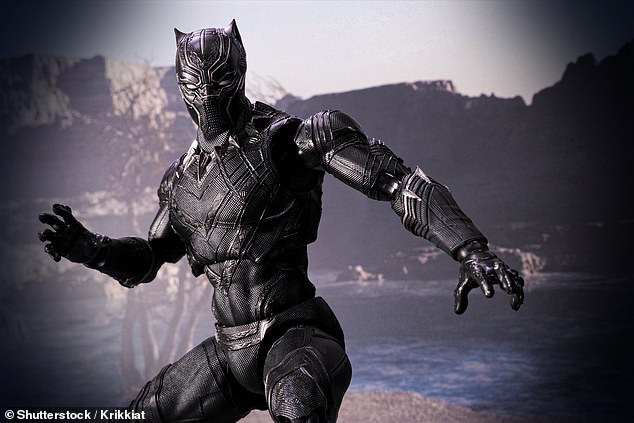 HOW THE MARVEL HEROES STACK UP

Health assets—Extremely wealth and superior intelligence puts him at reduced risk of dementia.

Health assets—No specific health assets were identified that distinguished Hulk from the others.

Being forcibly sterilised at a young age increases the risk of cardiovascular disease, dementia, and depression

Health risks—He uses a potion which improves physical and mental abilities, the adverse effects are unknown.

Health assets— Spider related abilities, including strength, flexibility, and agility, should reduce his risk of falls in old age.

Health risks—With nighttime crime fighting, he is unlikely to be getting enough sleep, which increases the risk of obesity, mental health issues and pain in old age.

According to the new study, published in the Christmas issue of the BMJ, regular physical activity and strong social bonds are vital for heroes, as well as mere mortals.

These ‘earlier in life’ positive behaviours can help reduce the risk of health problems later in life – such as dementia, heart disease and chronic pain conditions.

With superheroes often getting their power from traumatic or unusual events, the Australian team wanted to understand what impact this would have on their health.

‘As superheroes are likely to live longer than most people, it seems timely to reflect on their health status and associations with ageing,’ the team explained.

Where you live, and how much disposable income you have, can play a significant part in your long-term health outcomes.

To create an analog between ‘normal humans’ and ‘superheroes’ the team from Australia treated the Marvel heroes as a study cohort.

They reviewed 24 Marvel movies, starting in 2008 with Iron Man, and ending in 2021 with the Black Widow solo movie.

They assumed that the heroes age and their ageing trajectories are changed by personal traits in the same way as any ‘normal’ person.

The team started by looking at positive behaviours and ‘health assets’, finding that superheroes regularly engage in physical activity and exercise.

These are both associated with healthy ageing, the team explained.

The Marvel group also exhibit a high degree of social cohesion and connectedness in the movies.

This is associated with a reduced risk of dementia, the Australian team said.

The superheroes also show a positive or optimistic mindset.

They also demonstrated a psychological resilience and a sense of purpose.

All of these factors have been associated with healthy ageing.

With the exception of Thor and Iron Man, the superheroes do not drink heavily or smoke, they discovered.

Not smoking and avoiding heavy drinking are behaviours associated with longer life and healthy ageing – in both humans and superheroes.

Next, they examined negative behaviours and risk factors, which could lead to long-term health problems – both mental and physical.

The researchers then examined the personal traits and health behaviours of five of the superheroes  – Iron Man, Hulk, Black Widow, Black Panther, and Spiderman.

They note that both Black Panther and Iron Man are extremely wealthy and intelligent, which puts them at reduced risk of dementia. 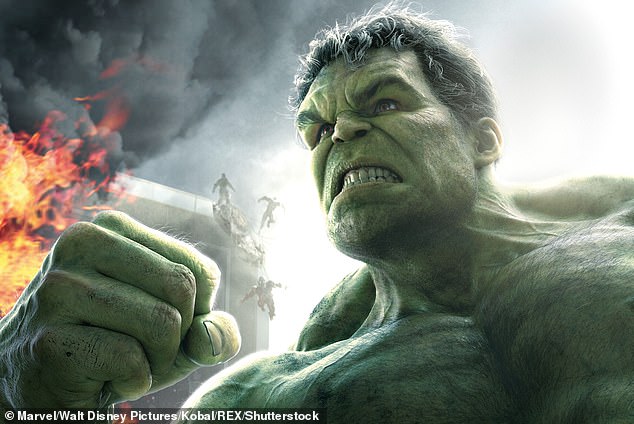 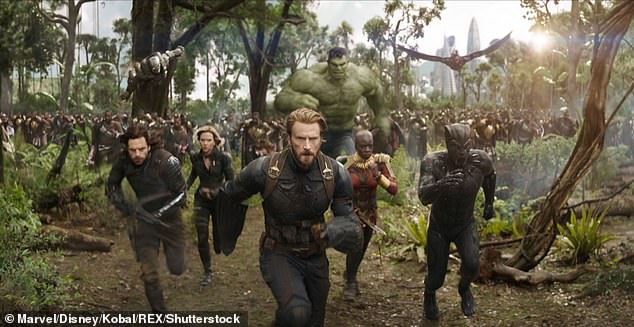 Black Panther is also vegetarian, which is known to support healthy ageing.

However, in direct contrast to Black Panther’s health, Hulk has heart problems, high body mass index, and the fact he is always angry, puts him at a high risk of multiple chronic diseases later in life.

Black Widow’s traumatic childhood experiences increase her risk of physical and mental illnesses as she ages.

While Spiderman’s strength, flexibility, and agility should reduce his risk of falls in old age, his nightly crime fighting means he is unlikely to be getting the recommended 8-10 hours of sleep for teenagers of his age.

This can lead to obesity, lower mental health, and higher rates of unintentional injuries, the researchers warned. 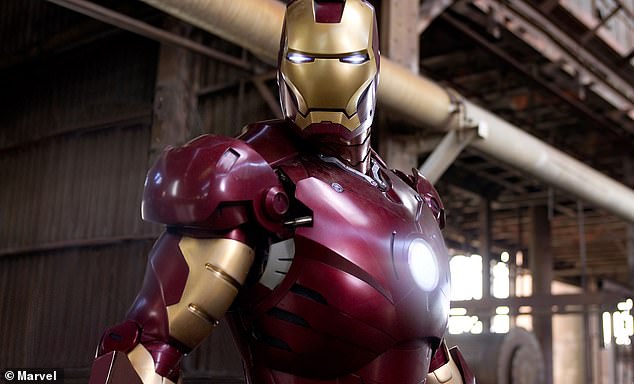 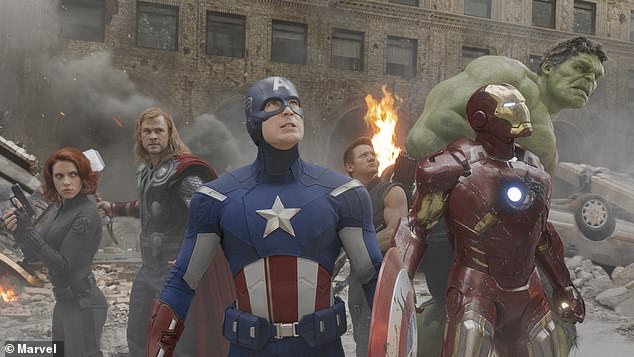 To date, the Marvel superheroes’ combined efforts focus on matters such as on maintaining the safety of the multiverse.

They also focused on the modulation of human consciousness, the creation of artificial intelligence, and the development of technology to facilitate space travel, say the authors.

However, they suggest they start focusing on dealing with the challenge of providing high quality health and social care to an ageing population.

‘This would enable people across the multiverse, including superheroes, to experience high quality of life in older age,’ they conclude.

The findings have been published in the journal BMJ.

WHAT IS DEMENTIA? THE KILLER DISEASE THAT ROBS SUFFERERS OF THEIR MEMORIES

Dementia is an umbrella term used to describe a range of progressive neurological disorders (those affecting the brain) which impact memory, thinking and behaviour.

There are many different types of dementia, of which Alzheimer’s disease is the most common.

Some people may have a combination of types of dementia.

Regardless of which type is diagnosed, each person will experience their dementia in their own unique way.

Dementia is a global concern but it is most often seen in wealthier countries, where people are likely to live into very old age.

HOW MANY PEOPLE ARE AFFECTED?

The Alzheimer’s Society reports there are more than 850,000 people living with dementia in the UK today, of which more than 500,000 have Alzheimer’s.

It is estimated that the number of people living with dementia in the UK by 2025 will rise to over 1 million.

In the US, it’s estimated there are 5.5 million Alzheimer’s sufferers. A similar percentage rise is expected in the coming years.

As a person’s age increases, so does the risk of them developing dementia.

Rates of diagnosis are improving but many people with dementia are thought to still be undiagnosed.

IS THERE A CURE?

Currently there is no cure for dementia.

But new drugs can slow down its progression and the earlier it is spotted the more effective treatments are.