Glasgow-based health-tech firm Dxcover is behind the method, which uses a blood sample, infrared light and machine learning software to provide a quick diagnosis.

The test is able to detect brain tumours in their infancy, reduce harms from surgery and fast-track patients into brain-imaging scans for better survival outcomes, the company says. 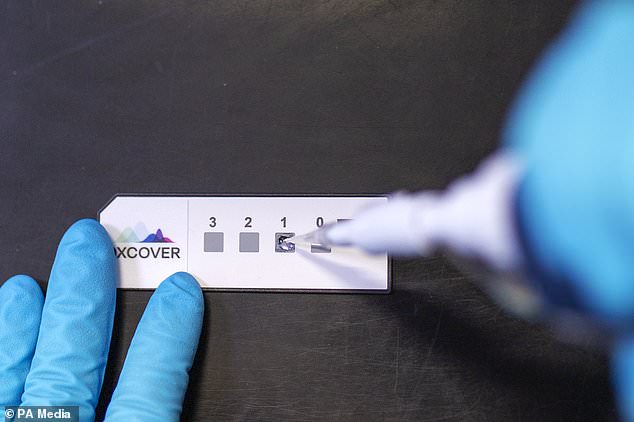 The Dxcover brain tumour test, involving a drop of blood serum that’s placed onto a slide and dried, has been hailed as ‘transformative

WHAT IS MACHINE LEARNING?

Dxcover, a spin-off from the University of Strathclyde, calls its technology a ‘brain cancer liquid biopsy’.

Its findings, published in the journal Cancers, show the test was effective at identifying patients with tumours as small as 0.07 of an inch (0.2cm).

It predicted the presence of glioblastoma, the most common and aggressive brain tumour, with 91 per cent sensitivity.

Glioblastoma begins in cells called astrocytes that support nerve cells. It can form in the brain or spinal cord.

‘Clinical tests like this are a crucial part of Dxcover’s journey to develop and commercialise a widely accepted multi-cancer early detection platform to help save lives’, he said.

For the firm’s study, blood samples from 177 patients with varying sizes of brain tumours were analysed using its patented technology.

The test method firstly involves a drop of blood serum – the clear, pale-yellow liquid that separates from the clot in the coagulation of blood – that’s placed onto a disposable slide and dried.

The slide is then analysed with spectroscopy – the absorption and emission of light and other radiation by matter – under infrared light before the Dxcover software platform detects the presence or absence of disease in minutes.

‘Data is captured from all the vital components, including the body’s response to disease,’ the firm says. ‘The artificial intelligence algorithm provides a result in minutes.’

Some 12,000 people in Britain are diagnosed with brain tumours annually and survival rates are as low as 12 per cent five years after diagnosis, according to Cancer Research UK.

Dr Paul Brennan, a consultant neurosurgeon at the University of Edinburgh, said diagnosis is difficult ‘because the most common symptoms are not specific to brain tumours’. 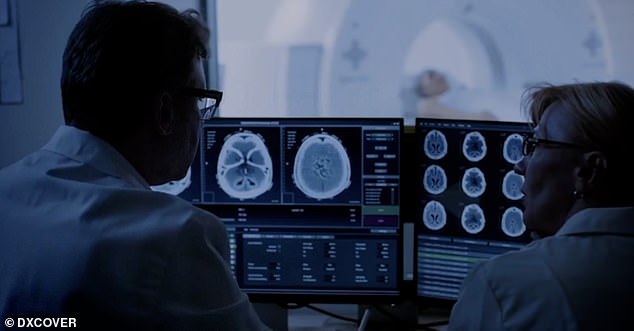 ‘A non-cancer diagnosis is more likely and this contributes to diagnostic delay,’ he said.

‘The Dxcover test will support primary care doctors to identify which of these patients are most likely to have a brain tumour and should be referred for rapid brain imaging.

‘This will be transformative for both patients and doctors.’

A brain tumour is a growth of cells in the brain that multiplies in an abnormal, uncontrollable way.

There are 2 main types of brain tumours:

– Non-cancerous (benign) brain tumours – these are low grade (grade 1 or 2), which means they grow slowly and are less likely to return after treatment

– Cancerous (malignant) brain tumours – these are high grade (grade 3 or 4) and either start in the brain (primary tumours) or spread into the brain from elsewhere (secondary tumours); they’re more likely to grow back after treatment.

The symptoms of a brain tumour vary depending on the exact part of the brain affected. Common symptoms include:

– Mental or behavioural changes, such as memory problems or changes in personality

– Progressive weakness or paralysis on one side of the body

See a GP if you have these types of symptoms, particularly if you have a headache that feels different from the type of headache you usually get, or if headaches are getting worse.

You may not have a brain tumour, but these types of symptoms should be checked.

Brain tumours can affect people of any age, including children, although they tend to be more common in older adults.

The cause of most brain tumours is unknown, but there are several risk factors that may increase your chances of developing a brain tumour.

If you have a brain tumour, your treatment will depend on:

– The type of tumour

– Where it is in your brain

– How big it is and how far it’s spread

– How abnormal the cells are

– Your overall health and fitness

Treatments for brain tumours include:

– Medicines to help with symptoms