Home » Science » Twitter rolls out Edit Button in the US to users who pay $4.99 a month

Twitter rolls out first ever Edit Button in the US to users willing to pay $4.99 a month: Feature lets you change a tweet up to FIVE TIMES within 30 minutes of sharing

Twitter has begun rolling out its new Edit Button to US users willing to pay $4.99 for its monthly Twitter Blue subscription, giving them the power to change tweets up to five times within 30 minutes of sharing.

Edited tweets have an icon and timestamp to display when the post was last edited and users can click on the label of an edited tweet to view the edit history and previous versions of the post.

The Edit Button has been the most sought after feature by users, but some fear it could be used to spread misinformation by letting the tweet’s creator change the message after it goes viral.

However, Twitter believes the ability to see the unedited version will stop false information from being shared – but the feature is still very new and it is not yet clear how this will play out.

Twitter has begun rolling out its new Edit Button to US users willing to pay $4.99 for its monthly Twitter Blue subscription. Edited tweets have an specific icon and timestamp from when it was last changed

Rachel Tobac, an ethical hacker and CEO of SocialProof Security, provided an example to The Washington Post on how edited tweets could wreak havoc on Twitter: ‘Somebody will tweet something that says, ‘These two celebrities just started dating.’

In 2021, Twitter officially rolled out its subscription service Twitter Blue in four countries – the US, Canada, Australia and New Zealand.

Twitter Blue, which is available for iOS, Android and the web, charges users $2.99 monthly fee to access exclusive features, including ‘Undo Tweet’, which gives users a chance to cancel tweets if they have second thoughts.

Twitter Blue also includes Bookmarks, which allows users to save individual tweets into folders, and Reader Mode, which converts threads of tweets into an article-like view.

‘It goes viral. Fifteen to 20 minutes later, they go in and they change that to a crypto scam, a phishing link, voting disinformation.’

Twitter announced earlier this year that it would be bringing the Edit Button to Twitter Blue, and started testing it with a small group of users in September.

Edited tweets are marked with a little pen symbol, so it’s clear to all Twitter users that the original tweet has been modified.

Users are also able to view previous versions of the tweet, creating a publicly accessible record of what was said and protecting ‘the integrity of the conversation’, according to Twitter.

By clicking on the tweet, users are able to see the edit history.

However, editing is only available for tweets and not for other posts such as retweets, replies and threads.

Jack Dorsey, who stepped down as Twitter CEO last November, had been adamant for years that an Edit Button would not come to Twitter.

In 2018, Dorsey discussed the possibility of an edit button at an event and said if Twitter would release such a feature it would be aimed at correcting spelling mistakes – which seems to be the purpose of the Edit Button.

However, Dorse also felt the feature could be used for evil, allowing people to potentially be used to change the meaning of tweets already shared. 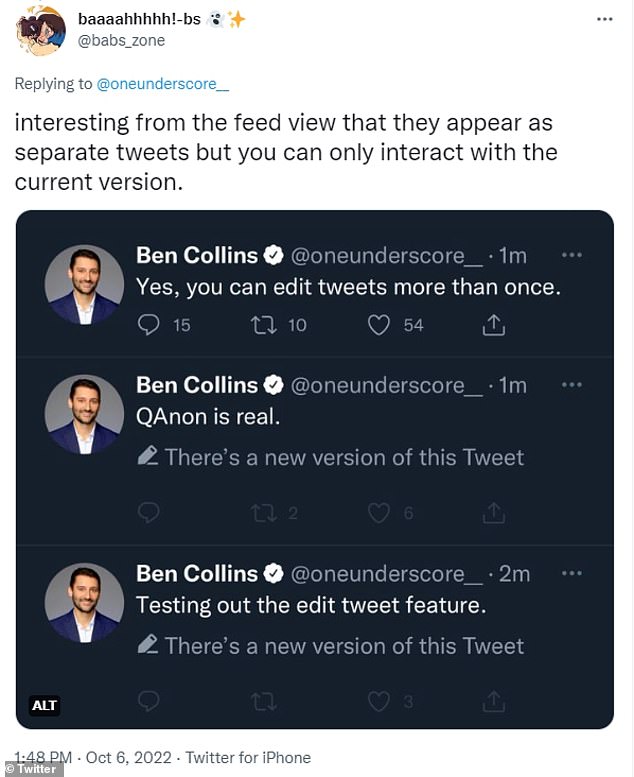 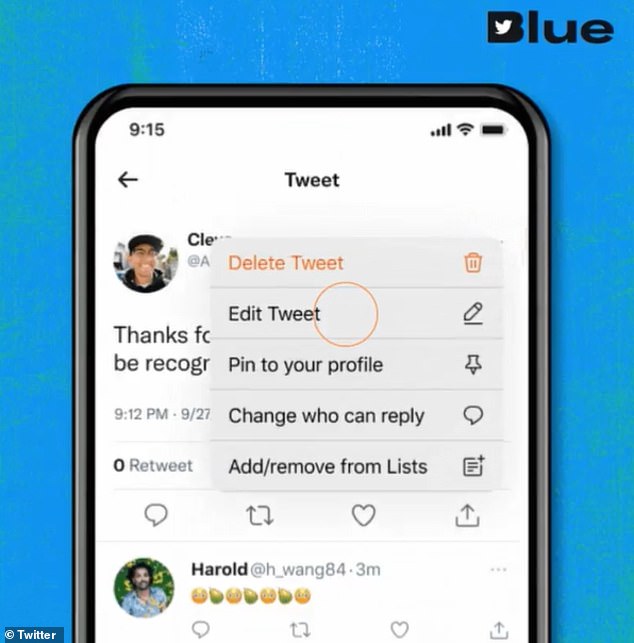 Edit Button is only available for Twitter Blue subscribers

With this in mind, he said if Twitter did ever add the option, it would ban unlimited editing.

‘You have to pay attention to what are the use cases for the edit button,’ Dorsey said.

‘A lot of people want the edit button because they want to quickly fix a mistake they made.

‘Like misspelling or tweeting the wrong URL. That’s a lot more achievable than allowing people to edit any tweet all the way back in time.