What the flip? Two sexually-aroused male dolphins are seen playing with an ANACONDA and carrying it in their mouths in a bizarre encounter captured by Amazonian researchers

In one of the more bizarre scientific encounters ever, two male dolphins have been seen playing with an anaconda while sexually aroused.

Researchers photographed the Bolivian river dolphins holding the unfortunate anaconda in their mouths as they swam in Bolivia’s Tijamuchi River.

But what was especially odd was that the dolphins had erect penises as they were carrying the snake, scientists reveal in a new study. 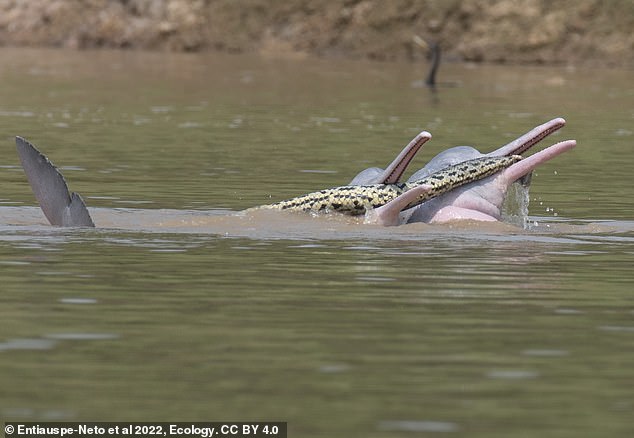 The two dolphins were swimming together in a synchronized manner, with similar speed and depth, as they held the anaconda

It is found in some rivers in the Upper Madeira Basin of the Bolivian Amazon.

The species is considered threatened with extinction, as most populations are facing declines associated with overfishing, hunting and habitat loss.

The dietary habits of the species in South America are poorly known.

The Amazon river dolphin is a freshwater fish specialist, consuming up to 43 fish species of 19 different families, so the same likely applies to the Bolivian river dolphin.

‘It could have been sexually stimulating for them,’ said Diana Reiss, a marine mammal scientist at Hunter College in New York told the New York Times.

Reiss, who was not involved with the study, said the anaconda ‘could have been something to rub on’.

The huge snake was a Beni anaconda (Eunectes beniensis), an apex predator that reaches around 14 feet in length.

It’s semi-aquatic, but according to researchers this particular specimen likely perished because its head was being held underwater for too long as the dolphins swam with it.

Bolivian river dolphins usually swim below the surface, but these two kept their heads above water for an unusually long time.

‘Surprisingly, they were very playful and remained visible on the surface linger than what was typical, which usually is between 2 to 5 seconds,’ the authors say in their study.

The two dolphins were swimming together in a synchronised manner, with similar speed and depth.

Researchers think the dolphins were engaging in play, and weren’t trying to eat the anaconda. But the indication they were sexually aroused suggests ‘a new frontier in frolicking’.

There were juvenile dolphins on the scene as well, so it’s possible that the adults were showing off the snake to them.

‘The fact that the adult river dolphins became seemingly sexually aroused (as seen by their erect penises through the genital slits) during this interaction also further corroborates that this was a playful interaction,’ they say

The event occurred in August 2021, and researchers have now published a paper describing it in the journal Ecology. 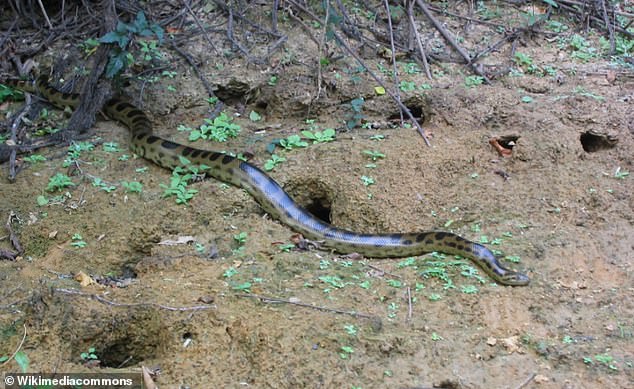 Their observation represents the first recorded interaction between a Bolivian river dolphin and a Beni anaconda, they say.

Several questions remain unanswered regarding the interaction, however.

A lack of dietary data on river dolphins means it’s not impossible that snakes are ‘an occasional food item’ as well as as a playful, possibly teaching, item.

Future observations will hopefully advance knowledge of ‘these exquisite and rare inhabitants to the remote Beni floodplains’, the authors conclude.

Remarkable pictures captured an extremely rare battle between a caiman and an anaconda in Brazil in 2021.

The snake wrapped itself around the caiman in what turned out to be a dramatic 40-minute fight for survival on the banks of the Cuiabá River.

The caiman desperately attempted to free itself as the anaconda constricted itself more and more, with the giant reptile sinking its teeth into the snake.

But the brutal fight eventually ended in a draw after the caiman fought off its attacker.

Anacondas kill by constricting (squeezing) the prey until it can no longer breathe and then swallow the prey whole.