The UK and Japan are working together to develop new technologies to safely decommission old nuclear sites.

The £12 million partnership, called LongOps, will focus on developing automated systems for sites including Fukushima in Japan, and Sellafield in Cumbria.

Robots are set to play an essential part in the time-intensive task of decommissioning legacy nuclear facilities faster, in a bid to remove risk to human health.

The collaboration will also allow the two countries to pursue research into fusion energy – a form of power generation that would generate electricity using heat from nuclear reactions. 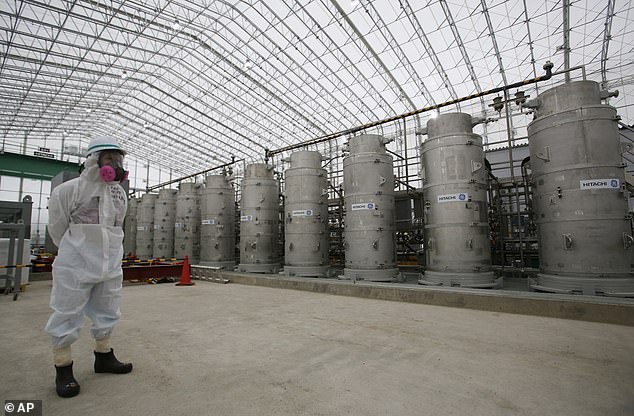 The £12 million partnership will focus on developing automated systems for sites including Fukushima in Japan (pictured), and Sellafield in Cumbria

Long-reach robotic arms will be used at the Sellafield site in Cumbria, as well as the Fukushima Dai-ichi reactors in Japan – which suffered a nuclear disaster in March 2011 after an earthquake and tsunami destroyed key cooling functions.

Developments from LongOps will also be applied to the upgrading, maintenance and dismantling of fusion devices, such as the Joint European Torus (JET), once their lifespans have ended.

This involves the creation of detailed virtual models of the physical world, allowing engineers to test new technologies in the virtual world and forecast potential maintenance and operational issues before developing real-world applications. 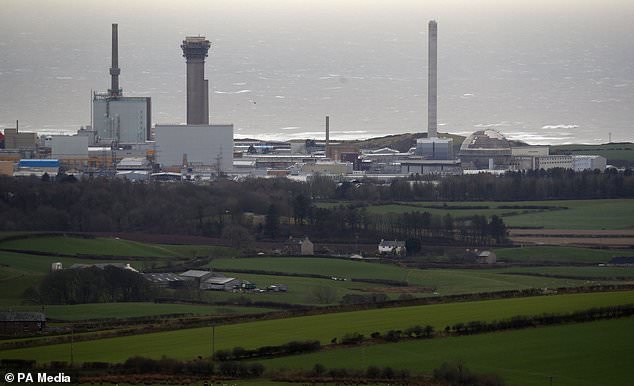 Long-reach robotic arms will be used at the Sellafield site in Cumbria, one of the UK’s biggest nuclear waste management sites

The project will also serve as an opportunity for the UK and Japan to pursue research into fusion energy.

Fusion is a form of low-carbon energy whereby the power of the sun is replicated on earth. It promises minimal impact to the environment, long-term reliability and weather independence.

‘To unlock the amazing potential of nuclear power, it’s critical that the UK works hand in hand with international partners to safely decommission nuclear sites while backing pioneering research into fusion, which could offer a limitless source of clean energy,’ Amanda Solloway, UK minister for science, research and innovation, said.

‘This innovative research alliance with Japan will ensure we share our expertise in robotics to address complex challenges such as nuclear decommissioning, while helping to secure highly skilled jobs across the country as we build back better from the pandemic.’

Akira Ono, chief decommissioning officer of TEPCO, said: ‘It has been almost a decade since the Fukushima Daiichi(1F) accident on March 11 2011.

‘TEPCO’s 1F decontamination and decommissioning was carried out initially on an emergency response basis, but we now will be entering the stage of taking on challenges in unchartered territory such as fuel debris retrieval (FDR).

‘I recognise that the robotics and remote-control technology is one of the most important key success factors for the FDR project.’

‘This unique international collaboration allows us to pool expertise and experience from Japan, working together and investing in cutting edge ways to find solutions to our shared problems and benefit our clean-up mission.’

WHAT WAS JAPAN’S 2011 FUKUSHIMA NUCLEAR DISASTER?

Approaching a decade after the disaster, researchers are still struggling to clean up fuel in the waters of the wasting reactors.

Pictured is an aerial view of the reactors of the tsunami-stricken Fukushima Dai-ichi nuclear power plant stand in Okuma, Fukushima

It’s estimated that plant officials have only located 10 per cent of the waste fuel left behind after the nuclear meltdowns.

And the damaged plant is believed to be leaking small amounts of the radioactive waste into the Pacific Ocean, which could be travelling as far as the west coast of the United States.

Researchers are now pinning their hopes on remote-controlled swimming robots to locate the lost fuel in order to work out the safest way to remove it.

The government has lifted evacuation orders for much of the region affected by the meltdown, except for some no-go zones with high radiation levels.

Authorities are encouraging evacuees to return, but the population in the Fukushima prefecture has more than halved from some two million in the pre-disaster period.