The U.S. Space Force launched a billion-dollar missile-warning satellite into orbit on Tuesday.

“Thank you to our mission partners for the tremendous teamwork as we processed and launched this asset that provides powerful surveillance and critical capabilities to protect our warfighters,” ULA Vice President of Government and Commercial Programs Gary Wentz said in a statement. “We are proud to work with the U.S. Space Force to continue to meet the national security needs of our country.”

The approximately 10-and-a-half-minute launch was the fifth in the series of space-based infrared system satellites, which are meant to replace the Defense Support Program constellation of surveillance satellites.

It was also the 87th launch of the 194-foot-tall Atlas V rocket and the 72nd Atlas V to launch from Space Launch Complex-41.

Space News reported Tuesday that the spacecraft’s “Technology Demonstration Orbiter” payloads – TDO-3 and TDO-4 – were successfully deployed and released from the 950,000-pound rocket’s Centaur upper stage around 16 and a half minutes after liftoff. 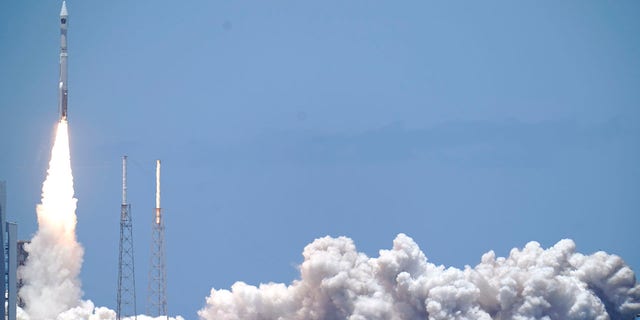 Nearly 43 minutes after liftoff, the satellite separated and deployed as well to a geosynchronous transfer orbit.

A geosynchronous orbit is a high Earth orbit that allows satellites to match the rotation of the Earth, according to Space.com.

The company’s next launch is for the Space Force’s Space and Missile Systems Center Space Test Program (STP)-3 mission, targeted for June 23, 2021, from the same launch complex.