Why you should ALWAYS close the lid before you flush: Disgusting footage reveals how a plume of particles can reach 5 FEET above the toilet within 8 seconds – with some particles lingering for minutes

If your parents always told you to close the toilet lid before you flush, gruesome new video shows that they really were right.

The footage, captured by scientists from University of Colorado Boulder, shows a plume of tiny liquid droplets violently ejected from the toilet after flushing.

These liquid droplets are usually invisible to the naked eye, so the researchers used bright green lasers in the lab to make them visible.

While this was a safe lab simulation using water, any toilet in use can potentially blast out droplets containing dangerous pathogens such as E. coli, norovirus and possibly even coronavirus. 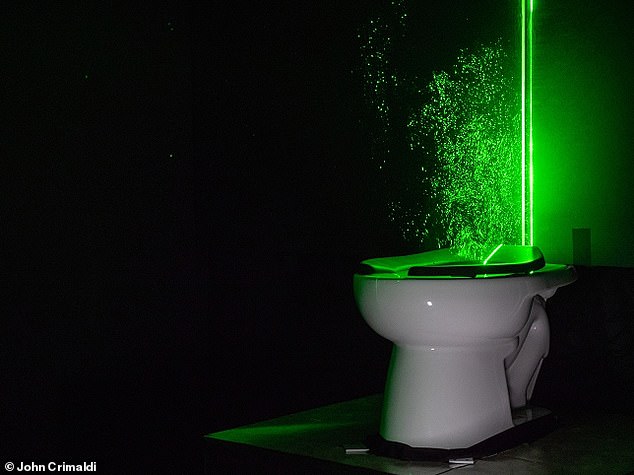 Using bright green lasers, engineers ran an experiment to reveal how tiny water droplets, invisible to the naked eye, are rapidly ejected into the air when a toilet is flushed without the lid

From the experiments, the researchers found that particles can shoot out at speeds of 6.6 feet (2 metres) per second, reaching 4.9 feet (1.5 metres) above the toilet within eight seconds.

While the largest droplets settled onto surfaces within seconds, the smaller and therefore lighter particles remained suspended in the air for several minutes.

These smaller particles were less than 5 micrometres (0.0002 of an inch or one-millionth of a metre) in diameter.

Smaller particles not only float in the air for longer, but can escape nose hairs and reach deeper into the lungs.

Previous studies have shown that the virus that causes Covid (SARS-CoV-2) is present in human waste, although there’s not yet conclusive evidence that it spreads efficiently through toilet aerosols.

Researchers have known for more than 60 years that invisible particles are released into the air when a toilet is flushed, but the new study shows what these particles look like and how they land on surfaces.

‘But once you see these videos, you’re never going to think about a toilet flush the same way again.

‘By making dramatic visual images of this process, our study can play an important role in public health messaging.’

Researchers say flushing with the lid up releases a so-called ‘aerosol plume’ – a big cloud of vapour particles that carry bacteria and other pathogens.

Some of these particles can zoom straight into your face, land on your skin, or even come into contact with objects around the bathroom – including your toothbrush.

Photos from the team’s study shows the illuminated aerosol plume 2.8, 4.4, and 6.4 seconds after flush initiation 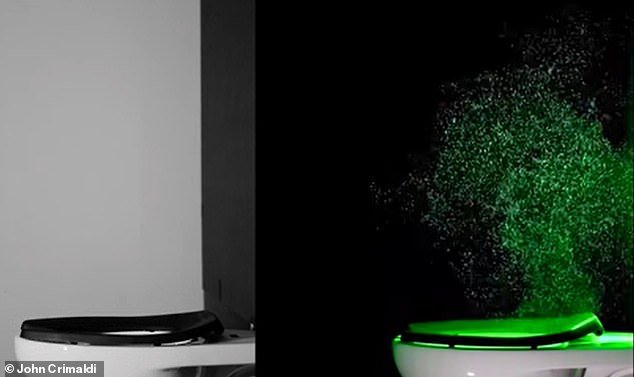 Pictured, side by side comparison of the toilet flushing with and without the green laser light

Why you should wear a mask when using a urinal

The flush of a urinal causes coronavirus-laden particles to ‘climb violently’ into the air, a study found, with experts now recommending wearing masks in public toilets.

Researchers from China simulated how particles are expelled from urinals when the latter are flushed — creating an invisible spray of potentially infectious droplets.

They found that 57 per cent of the particles are ejected away from urinal, where they can hit the thigh of a user within less than six seconds.

The findings follow previous work by the team which found regular toilets also issue clouds of potentially viral aerosols when flushed — especially if the lid is left up.

However, the spray from urinals is predicted to travel both faster and further.

Urinals are more frequently used in densely populated areas — and the researchers noted that they pose a ‘serious public health challenge’.

What’s more, pathogens can fester in toilet bowls for days, meaning you could catch them off anyone you share a toilet with when aerosol plumes are released by flushing.

Aerosol plumes are a particular issue for toilets that don’t even have lids, typically seen in bars, nightclubs and airports.

These public facilities are also often used by hundreds, or even thousands of people per day from different households, increasing the risk of different pathogens festering together.

For the study, the team filmed a lab set-up intended to replicate a toilet in a public restroom in the US, without a lid.

They used two green lasers – one that shone continuously on and above the toilet, while the other sent out fast pulses of light over the same area.

The constant laser revealed where in space the airborne particles were, while the pulsing laser measured their speed and direction.

They also measured the airborne particles with an optical particle counter, a device that sucks a sample of air in through a small tube and shines a light on it, allowing it to count and measure the particles.

Fortunately for the researchers, the toilet only contained tap water rather than any human waste or toilet paper.

The team found the energetic particles headed mostly upwards and backwards towards the rear wall ‘like a rocket’, but their movement was unpredictable.

The plume also rose to the lab’s ceiling, and with nowhere else to go, moved outward from the wall and spread forward, into the room. 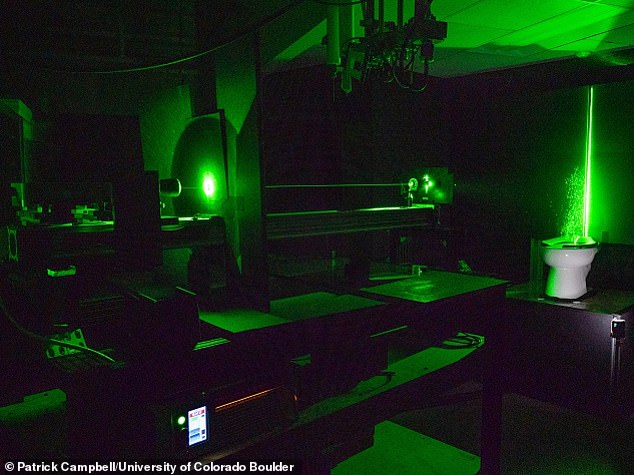 For the study, the University of Colorado Boulder researchers created a lab set-up intended to replicate a toilet in a public restroom in the US

Spatial distribution and growth of aerosol plumes over time, starting at 2.5 seconds after flush initiation and ending at 7.5 seconds

Overall, the study, published in Scientific Reports, shows the need for fitting toilets with lids in public facilities, and provides a message to the public to use them in their homes.

It also shows the importance of working on disinfection and ventilation strategies to reduce exposure risk to pathogens in public restrooms.

‘The goal of the toilet is to effectively remove waste from the bowl, but it’s also doing the opposite, which is spraying a lot of contents upwards,’ said Professor Crimaldi.

‘Our lab has created a methodology that provides a foundation for improving and mitigating this problem.’ 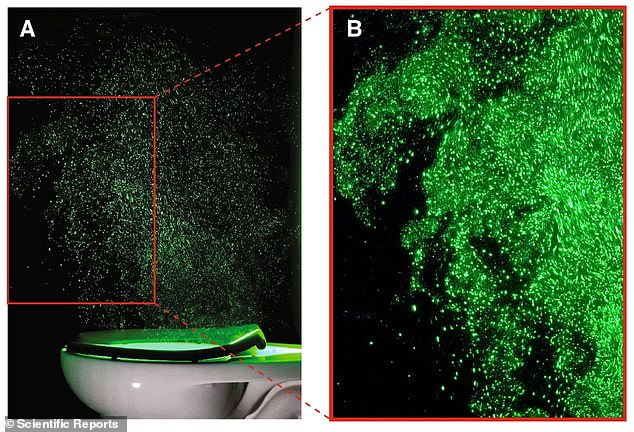 Here, the third panel of the plume (6.4 seconds after flush initiation) is reproduced and zoomed in on, showing the location and motion of larger particles 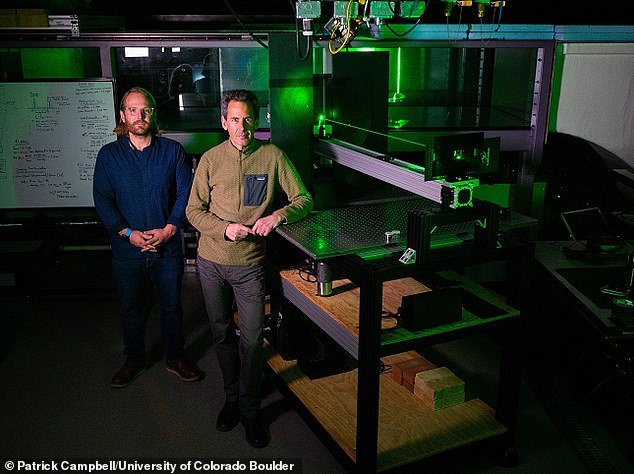 ‘If you flush with the toilet lid up you could be brushing your teeth with toilet water,’ he said in the clip.

‘The plume and water particles float around for a few hours around your bathroom before they all eventually land and some of them could even land on your toothbrush.’

Since it was posted, the clip has received more than 600,00 views and a barrage of horrified responses.

‘I did not know that. Loo separate from bathroom but will flush with lid down from now on,’ one fan said.

‘And just like that…the seat will be down from now on,’ a second wrote.

Another said: ‘My mum instilled always putting the lid down. That’s my house rule. Always. Not in use, lid is down. Nobody wants to see inside a toilet anyway.’

Aerosol droplets containing urine, faeces and vomit stay in the air for up to 20 seconds

Tiny droplets carrying traces of urine, faeces, vomit and viruses float into the air at mouth-level after a toilet is flushed, a 2021 study warned.

It showed that tens of thousands of particles are spewed into the air by a flush and can rise several feet above the ground.

Droplets were spotted floating around five feet (1.5m) in the air for more than 20 seconds, with researchers pointing out this poses a risk of inhalation.

Small droplets and aerosols are so light they can float around in the air on tiny draughts, before settling on a surface.

Researchers say that they can also act as vectors for diseases. SARS-CoV-2, the virus which causes Covid, for example, has been found alive in human faeces.

Therefore, scientists warn that flush-propelled particles from an infected person’s faeces could float into the air, be sucked in by a passer-by, and infect them.