Want to love your body? Give it time! Women feel more satisfied with their figures from age 60 onwards, study finds

If you’re struggling to love your body, a new study suggests you’ll be happy with it eventually.

Researchers assessed the body satisfaction of around 15,000 men and women in New Zealand over the course of six years.

They found body satisfaction increased across the lifespan for both men and women, but women specifically started to love their body around the age of 60 and men between the ages of 59 and 64.

It’s possible that a newfound appreciation for how we look around the 60-mark coincides with our health becoming more important than our looks – for both men and women.

The researchers warn that for women, pregnancy and postpartum periods typically lead to physiological changes that can negatively affect body image.

These are ‘inconsistent with rigid beauty ideals’, they say, such as weight gain, body shape changes, hair thinning and skin blemishes.

Despite this, it may be possible that body dissatisfaction is less severe than it was several generations ago, according to the researchers. 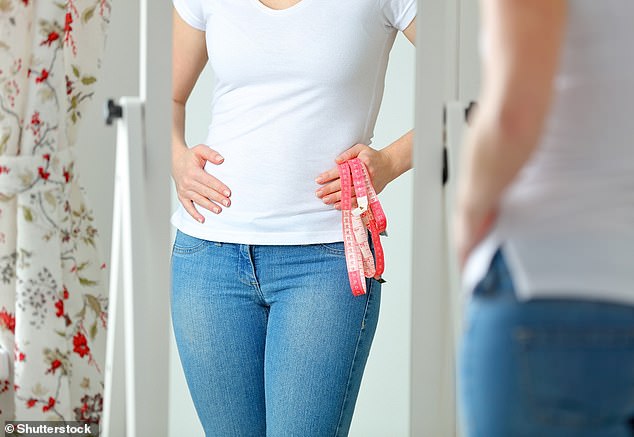 Body satisfaction increases across the lifespan for men and women, a new study from experts in Australia and the University of Auckland in New Zealand reveals. But women specifically started to love their body around the age of 60

BODY SATISFACTION IS BEST AROUND AGE 60

‘Results of this study show a relatively flat pattern for women with a slight increase in women’s body satisfaction across the lifespan, especially in later years of life – from roughly 60 years of age,’ they say.

‘This finding sits in contrast to our predictions and a body of research suggesting that body dissatisfaction is relatively stable across the female lifespan.’

The team claim ‘body-related perceptual shifts’ may gradually occur across the female lifespan as women get older.

This buffers against the impact of ‘damaging thin and youthful ideals’ in Western cultures that may make women want to lose weight.

For the study, researchers examined patterns of change and cohort effects in body image across the male and female adult lifespan.

The longitudinal study assessed body satisfaction in 15,264 participants – 62.9 per cent of whom were women – aged between 18 to 94 years of age from various waves of the New Zealand Attitudes and Values Study.

Children as young as eight have body image issues, a 2018 study.

Youngsters become self-conscious of their appearances when their hormone levels rise in preparation for puberty, according to the authors.

They analysed sex hormone levels in 516 boys and 621 girls aged between eight and nine years old.

The youngsters were shown eight illustrated silhouettes of children that ranged from very thin to very obese.

They were asked to choose the silhouette they felt they most looked like, known as the self rating, and then the image they wished to look like; the ideal rating.

Lead author Dr Elizabeth Hughes, from the University of Melbourne, said: ‘What we have learnt is that pre-pubescent children, as young as eight and nine, are vulnerable to poor body image and the dissatisfaction does appear to be linked to hormone levels associated with the onset of puberty.

The participants’ body satisfaction was assessed over the course of six years, from 2010 to 2015.

Body satisfaction was measured with the response to a single statement – ‘I am satisfied with the appearance, size and shape of my body’ – scored on a scale from 1 (very inaccurate) to 7 (very accurate).

Contrary to existing research, the findings also found recent improvements in body image for women of a certain cohort.

Young and middle-aged women were shown to grow happier with their bodies during the study’s assessment period.

Women who entered the survey at 19, 29, 39, 44, and 49 years of age each showed significant improvement in their body image over the five years of assessment.

‘These patterns were so marked, that in many cases women were entering age stages with higher body satisfaction than that reported by their preceding cohort who entered the study five years prior,’ the authors say.

‘These results depict a positive story that sits in contrast to much of the past literature, in which body image appeared to be getting increasingly worse across time and generations.’

For women aged 54 years and below, all but two cohorts (24 to 29 and 34 to 39 years) displayed an upward trajectory in their body satisfaction.

Declines in body satisfaction for these two cohorts may be due to potential declines during biological periods of vulnerability, such as post-partum and menopausal periods.

In men, meanwhile, the 39 to 44 cohort had higher levels of body satisfaction than the 44 to 49 cohort, which showed a marked decline.

‘Overall, the results of the current paper demonstrate an improvement in body satisfaction across the lifespan for both men and women.

The study has been published in the journal Body Image.

Life begins at 80! Major study reveals people reach their happiest at 82 and parts of the brain improve as we get older

People reach their happiest aged 82 and parts of the brain even improve as we get older, according to a major study highlighted in a new book.

The research busted myths about ageing including loss of memory and difficulties in learning new skills.

It was found that life ‘only gets better’ in terms of general mental contentment and problem solving continues to progress well into old age.

Author Daniel Levitin cites the research, carried out by DG Blanchflower and AJ Oswald, in his 2020 book, The Changing Mind: A Neuroscientist’s Guide To Ageing Well.

Speaking on Radio 2’s Good Morning Sunday, Levitin said: ‘Neuroscience has found in the last ten years… [that] your memory won’t necessarily get impaired as you age.

‘Another big myth is that older adults are depressed.

‘But the average peak age of happiness across 72 countries is aged 82 and I think we can push that out another ten years if we can combat ageism as well as with medical technology.

‘We tend to think of ageing as this process starting at birth and if you’re lucky you get to keep doing it.

‘The story is you keep acquiring skills and getting better and better up until a point, then you start losing stuff like crumbling bits off the Rock of Gibraltar.

‘But in fact we now have strong evidence in the last ten years that a number of brain faculties actually get better, right on up till the end.’

Mr Levitin added that the majority of people become more empathetic and are better equipped to deal with challenges in life – both for themselves and others.

High profile members of the elderly community including Clint Eastwood, 89, the Dalai Lama, 84, and Stevie Wonder, 69, were consulted as part of the research.

Mr Levitin was asked what Clint Eastwood’s secret to happiness in old age was, to which he said: ‘He told me: “I just don’t let the old man in”.’

Research also showed religious people were happier than those without a faith.