World’s first neighborhood entirely of 3D-printed homes is planned for California’s Coachella Valley and will boast 15 eco-friendly homes that start at $595,000 each

The world’s first 3D-printed neighborhood is set for California that will feature 15 eco-friendly homes starting at $595,000.

The $15 million project is planned for Rancho Mirage in Coachella Valley and is a collaboration of the real estate group Palari and Mighty Buildings, which expect to complete the neighborhood next year.

Mighty Buildings will use its robotics and automation to construct homes, which the firm says can be completed with 95 percent less labor hours and 10 times less waste.

Residents of the futuristic housing can move into a single-story home with three bedrooms and two baths or a smaller unit with two bedrooms and one bath. 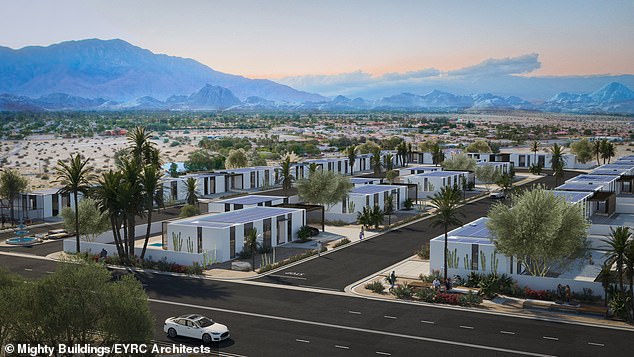 The world’s first 3D-printed neighborhood is set for California that will feature 15 eco-friendly homes starting at $595,000. The $15 million project is planned for Rancho Mirage in Coachella Valley

Construction is planned to cover a five-acre parcel of land, which is known for its history of presidential vacations and summits.

Alexey Dubov, co-founder and COO of Mighty Buildings, said: ‘This will be the first on-the-ground actualization of our vision for the future of housing – able to be deployed rapidly, affordably, sustainably, and able to augment surrounding communities with a positive dynamic.’

Each home will feature textured exterior stone walls and floor-to-ceiling windows, along with a mid-century modern architecture. 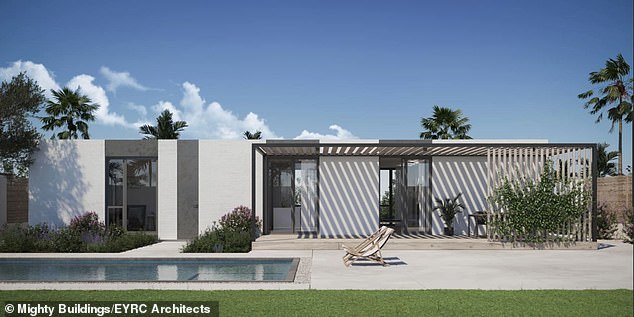 Each home will feature textured exterior stone walls and floor-to-ceiling windows, along with a mid-century modern architecture. Residence will also have a swimming pool and deck in the backyard

Both units will include a large backyard with a swimming pool and deck, along with ‘views of the surrounding mountains with plenty of space for lounging and desert star-gazing.’

Might Buildings, based in Oakland, California, says it can manufacture a 350 square-foot studio unit in less than 24 hours, which suggests larger units will be completed in less than five days and the smaller homes in less than two days.

All energy needs will be supplied by solar, with optional Tesla Powerwall batteries and EV chargers for a fully integrated electric car-home experience. 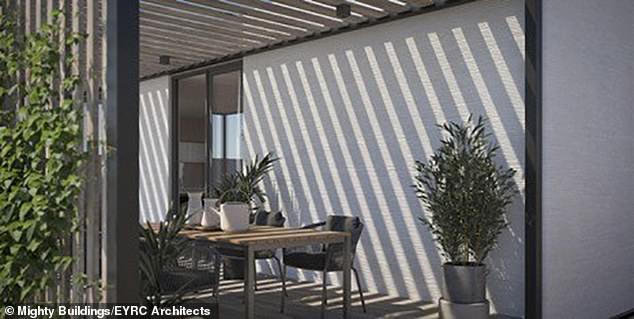 Basil Starr, Founder and CEO of Palari, said: ‘We are thrilled to launch this first development of 3D printed sustainable homes and partner with Mighty buildings to realize our common vision of transforming the way we build homes of the future.

‘3D printing allows us to build faster, stronger and more efficiently, making it integral to our platform of streamlining home-building process centered on sustainability of construction, materials, and operations.’

First invented in the 1980s by Chuck Hull, an engineer and physicist, 3D printing technology – also called additive manufacturing – is the process of making an object by depositing material, one layer at a time.

Similarly to how an inkjet printer adds individual dots of ink to form an image, a 3D printer adds material where it is needed, based on a digital file.

Many conventional manufacturing processes involved cutting away excess materials to make a part, and this can lead to wastage of up to 30 pounds (13.6 kilograms) for every one pound of useful material, according to the Energy Department’s Oak Ridge National Laboratory in Tennessee.

By contrast, with some 3D printing processes about 98 per cent of the raw material is used in the finished part, and the method can be used to make small components using plastics and metal powders, with some experimenting with chocolate and other food, as well as biomaterials similar to human cells.

3D printers have been used to manufacture everything from prosthetic limbs to robots, and the process follows these basic steps:

· Preparing the printer, including refilling the raw materials such as plastics, metal powders and binding solutions.

· Initiating the printing process via the machine, which builds the object.

· 3D printing processes can vary, but material extrusion is the most common, and it works like a glue gun: the printing material is heated until it liquefies and is extruded through the print nozzle

· Using information from the digital file, the design is split into two-dimensional cross-sections so the printers knows where to put the material

· The polymer rapidly solidifies, bonding to the layer below before the build platform lowers and the print head adds another layer (depending on the object, the entire process can take anywhere from minutes to days.)

· After the printing is finished, every object requires some post-processing, ranging from unsticking the object from the build platform to removing support, to removing excess powders.