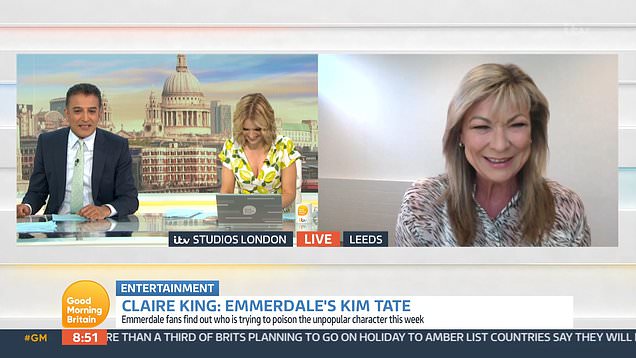 Adil Ray was so flustered during an interview with his Emmerdale crush Claire King on today’s episode of Good Morning Britain that the interview completely fell apart.

The Kim Tate actress joined the programme via a live link where she discussed the poisoning storyline that is currently at the centre of her character’s arc, however, things got a little out of hand when Charlotte Hawkins revealed Adil was a secret admirerer.

‘You had a bit of a crush?’ Charlotte probed, prompting her co-star to come clean.

‘Bless you,’ Claire replied before asking: ‘What happened then?’

He then attempted to move the interview on by asking about how the soap has elvoved since its heyday when it was known as Emmerdale Farm. However, his mission quickly crumbled when a throwback picture of Claire and a horse popped up on the screen.

Charlotte offered: ‘Are you alright? Are you getting a bit distracted?’

Answeing the question, Claire replied: ‘It’s just as big now if not bigger.’

But by this point, Adil was a complete lost cause.

Elsewhere in the interview, Claire said she feels ‘very lucky’ because the character gets ‘great writing’.

‘I joined the show in 1989, but I had a 20-year break. But the Tate family joined in 1989 and she’s still here and still being evil. She’s one of those characters you love and you love playing.

‘She’s larger than life, you can be the boo/hiss villain, you get away with murder… literally and just enjoy playing it.’