Dan Walker, 43, and Sally, 49, were on hand to present BBC Breakfast and towards the end of the programme, they handed the reins over to Gethin Jones, 43, and Kym Marsh, 44, to discover what was coming up on Morning Live. The latter pair told viewers what was going to be coming up on the BBC magazine show once the news handed end. They revealed Strictly Come Dancing star Katya Jones, 31, was going to be on the programme but when medical professional Dr Xand tried to replicate her entrance, he left his co-stars in hysterics. 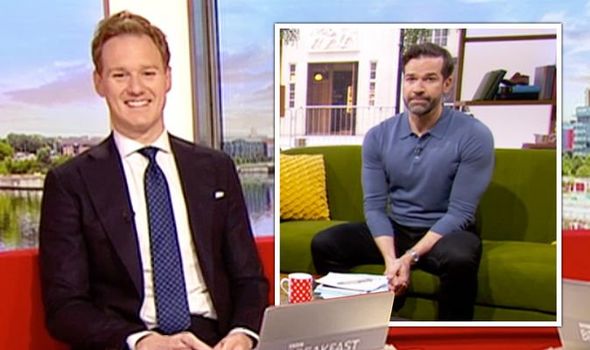 After Katya had arisen from under the table by throwing her hair back, Kym commented: “There she is, the glamorous girl.”

Gethin tried to replicate the movement but said that “you need the hair to do that, don’t you?”

“Not quite the same,” Kym jibed but then Dan told them from the Breakfast studio that he would like to see Dr Xand try to replicate Katya’s entrance.

However, his timing was out of sync and the Strictly professional could be heard saying: “He could do it if his head wasn’t under the table.”

After an awkward pause, the medical professional then did his best hair flick and all his colleagues could be heard cackling away in the background.

“How did I do?” The doctor asked to which Gethin said of the blunder that had occurred: “It was the bit where he didn’t realise he was out of shot that spoilt that, didn’t it.”

”If that’s not a gif in 10 seconds, I will be massively disappointed,” Dan jibed before taking back the reins of the news show from Morning Live.