Bob Saget’s death on Jan. 9 brought the television comedy world together in memorials. Jimmy Kimmel opened his Jan. 10 show with a monologue about Saget, who was a guest on Jimmy Kimmel Live and they’d hosted fundraisers together. Kimmel teared up many times remembering Saget.

Jimmy Kimmel boils Bob Saget down to one word

Bob Saget memorials came in from Full House co-stars, the makers of How I Met Your Mother and others who knew and worked with him. One common thread was people sharing how nice Saget was.

“If you read anything about Bob online last night, if you saw any of the many thoughts from people who knew him personally, a word that came up a lot was the sweetest,” Kimmel said. “And Bob was the sweetest. He was the sweetest man. The reason people wrote that is because it’s true. It’s the best word. If you had to pick one word to describe him that was it, the sweetest.”

Examples of Bob Saget being sweet

Kimmel shared several examples of how Saget supported his friends and colleagues, both in public and private.

“I had so many wonderfully kind and supportive texts and emails, calls from Bob,” Kimmel said. “He always had a compliment. He would write sometimes just to tell me he loved me. I know he did that for many people.” 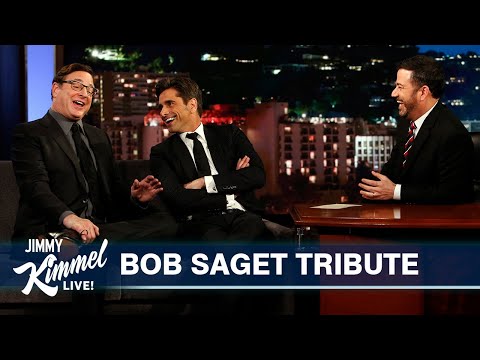 Saget’s standup comedy was much more profane than the family comedy he was known for on Full House or How I Met Your Mother. Kimmel said Saget could entertain people socially, but he never went negative.

“When you walked into a party and you saw Bob and his wife Kelly in the corner, you’d go straight to them and stay for as long as you could because he had something funny to say about everything and nothing bad to say about anyone,” Kimmel said. “Never. If there are people he didn’t like, he kept it to himself. He was unlike me, he was a good person.”

To commemorate Bob Saget’s death, donate to his charity

“When Gay was diagnosed, Bob later joined the board of directors for the Scleroderma Research Foundation,” Kimmel said. “He hosted and booked fundraisers every year up until last year. We did many of them together. He was very committed to finding a cure for this incurable disease that took his sister’s life. I know that if you wanted to remember him there’s nothing he would appreciate more than if you support SRF.”