It’s where the action truly happened and, after 34 years, Bruce Willis has finally revisited the legendary set of his 1988 blockbuster Die Hard.

The 67-year-old actor returned to the top of the Fox Plaza in Los Angeles on Friday, which was the setting for the fictional Nakatomi Plaza in the hit film.

His wife Emma Heming Willis, 44, shared a black and white video of the moment to Instagram for the movie’s 34th anniversary and captioned it: ‘Nakatomi Plaza 34 years later.’

In the video, present-day Bruce is seen atop the tower before the footage cuts to shots of him in the action movie.

The star famously took on the leading role as John McClane, an New York City police officer who visits his estranged wife at her office in Nakatomi Plaza where employees are at a Christmas party.

The festivities soon come to an end when a group of terrorists raid the building and it’s left to John to save the hostages. 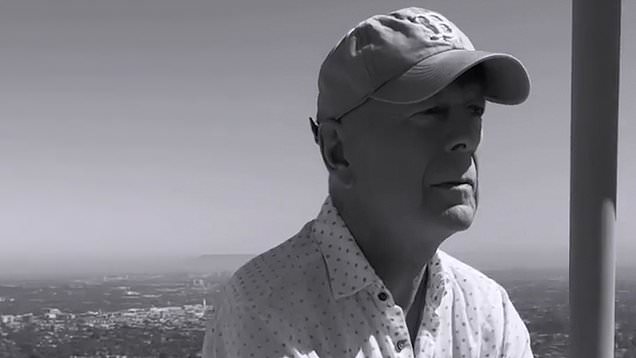 It was a particularly poignant, almost full circle visit for the star who is retiring from acting after more than 40 years in the industry following his diagnosis of aphasia.

Aphasia is a degenerative condition that affects speech and communication, usually caused by damage to the brain, and people who had worked with Willis before his retirement were reportedly concerned for his well-being.

In March, his family, which includes his actress ex-wife Demi Moore, with who he has three daughters Rumer, Tallulah and Scout, made the announcement that he was ‘stepping back’ from filming movies on their collective Instagram pages.

‘This is a really challenging time for our family and we are so appreciative of your continued love, compassion and support,’ they added.

‘We are moving through this as a strong family unit, and wanted to bring his fans in because we know how much he means to you, as you do to him. As Bruce always says, “Live it up” and together we plan to do just that.’

His wife Emma responded to the outpouring of well-wishes on her Instagram Story with: ‘Your love, support, compassion, prayers really help. I’m grateful.

‘Thank you from the bottom of my heart.’

The model, who has daughters Mabel, 10, and Evelyn, eight, with Bruce, later admitted taking care of family has ‘taken toll’ on her mental health after star’s aphasia diagnosis.

She told The Bump: ‘Someone told me not long ago that when you over-care for someone, you end up under-caring for yourself. That stopped me in my tracks and really resonated with me.

‘I struggle with making the time for self-care every day. I put my family’s needs above my own, which I found does not make me any kind of hero.

‘That amount of care for everyone else within my household had taken a toll on my mental health and overall health, and it served no one in my family.’