GB News anchor Colin Brazier openly mocked Grolsch on Twitter this evening. It comes after the beer brand is one of many companies who have boycotted the news channel when it comes to their advertising slots. And as he sat down at home to enjoy the summer evening, he opted for an alternative tipple to that of Grolsch.

Taking to Twitter, Colin posted an image of a bottle of Timothy Taylor’s Landlord beer on a wooden table.

He captioned the tweet: “Tonight’s tipple in the garden. I fancied a Grolsch, but I seem to have accidentally tipped it down the sink.”

And the journalist’s followers agreed with his decision.

One replied: “@colinbrazierGBN Quality tipple, I just happen to have one in the fridge, think I’ll join you.”

“@colinbrazierGBN I dont blame you – plenty of superior British beers to chose from,” another remarked.

A third added: “@colinbrazierGBN Good move Colin … that’s all Grolsh is fit for these days ;).” 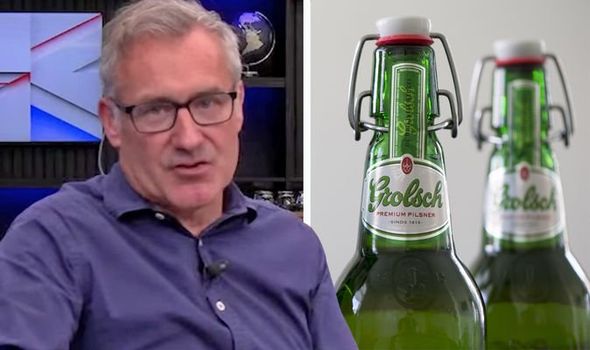 At least six brands have suspended advertising on GB News in the first few days since its launch.

Drinks companies such as Kopparberg and Grolsch, as well as skincare brand Nivea and the Open University, have all distanced themselves from the channel.

Swedish retail giant IKEA and Ovo Energy have also added their names to the list.

Advertising sales for the channel are being handled by Sky Media and many of the brands said they were unaware their campaign would appear on GB News.

Kopparberg were the first to make its stance known and on Monday, they told Twitter followers they wanted to review GB News’ content before making a decision.

The comment said: “We want to make it clear to everyone that our ad ran on this channel without our knowledge or consent. Kopparberg is a drink for everyone and we have immediately suspended our ads from this channel pending further review of its content.”

Nivea also said they wanted to review the channel for three months before choosing to advertise there.

A Nivea spokesperson told Press Gazette: “Media buying algorithms mean our adverts are automatically allocated across a wide selection of channels often without our knowledge, which is what has taken place in this instance.

“Typically, we would wait for a few months after a new channel or publication has launched before advertising with them, to ensure that they reflect the values we hold as a company.

“We have paused our advertising with GB News in line with this policy and will review this decision in three months.”

As for Grolsch, they said they would “do everything we possibly can” to stop the adverts appearing again.

It told one campaigner: “This advert for Grolsch ran on the GB News channel completely without our knowledge or consent, and we’re in the process of investigating with our media partners why this happened.

“Grolsch is a brand that prides itself on core values of inclusion and openness to all people, and we want to be clear that we do not associate ourselves with any platforms or outlets that go against these values.

As for IKEA, they argued they had “not knowingly” advertised on GB news and has “safeguards in place  to prevent our advertising from appearing on platforms that are not in line with our humanistic values and vision to side with the many people”.

They were now “in the process of investigating how this may have occurred to ensure it won’t happen again in future, and have suspended paid display advertising in the meantime”.

“We will do everything we possibly can to ensure that Grolsch does not appear on this channel again.”

Ovo Energy also issued a statement: “We have a media partnership which places our adverts across a number of channels and programmes on a network. New channels were added to this network last week and our adverts ran on this channel without our prior knowledge or consent.

“OVO strongly believes that a kinder world is a stronger one. We strive to promote inclusion and diversity across all OVO spaces and we do not place our brand in any places which distribute or promote hate.

“We have a clear policy not to advertise on platforms which do not align with our values. We’ve made the decision to pause our use of the channel whilst we ensure it meets our values.”

It comes after Piers Morgan hit out at IKEA for boycotting GB News.

He retweeted IKEA’s comments and added his own: “Oh shut up, you pathetic virtue-signalling twerps. I’m now boycotting IKEA.”

GB News is available to watch live on their website.