Asha Alahan (played by Tanisha Gorey) is a firm favourite with Coronation Street fans, especially when she had a brief romance with Nina Lucas (Mollie Gallagher) recently. But their relationship was not meant to be and viewers saw Asha get back with Corey Brent (Maximums Evans). In upcoming scenes of the ITV soap, Asha and Corey become serious and live together in a flat, but while Asha is enjoying this new situation, the same can’t be said for her boyfriend who seems to have a wandering eye. According to official soap spoilers, Corey and Kelly Neelan (Millie Gibson) will flirt – is this the start of another heartbreak for Asha when Corey cheats on her with her best friend?

Asha may only just be an adult, but that doesn’t stop Dev Alan (Jimmy Harkishin) from worrying about his daughter.

Next week, fans will see the shop owner express his concern with Asha’s living arrangements and decides to have a word with Corey’s dad.

Dev meets Stefan, Corey’s father, but it isn’t long before Dev realises Stefan couldn’t care less about what his son gets up to.

As a result, Dev loses his temper and gives Stefan a stern warning; if Asha fails her exams or ends up pregnant, he will hold Corey’s father accountable for his lack of parental responsibility.

It isn’t long before word gets back to the teenagers and Corey tells Asha her father is not welcome at their flat – but this infuriates Asha. 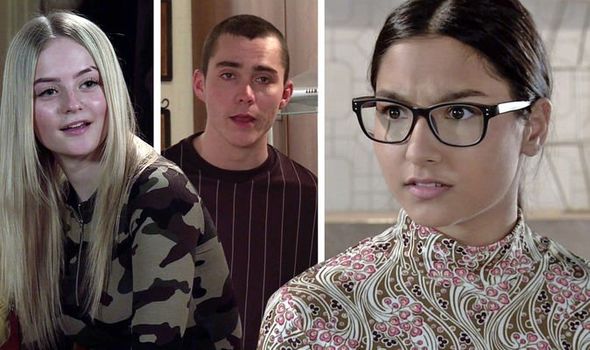 The next day, Aadi (Adam Hussain) tells his dad Asha has been in touch with him and told him where she is living and Dev heads to Nick Tilsley (Ben Price) and Leanne Battersby’s (Jane Danson) old flat.

He is surprised to see Corey opening the door and it isn’t long before the smug teenager explains how his parents have taken over the lease and he and Asha are living there now.

Asha also seems happy with the new living arrangements because, in the cafe, she tells Nina and Kelly.

It seems everyone on the Street is giving their opinions to Dev as Yasmeen Nazir (Shelley King) warns him he needs to keep a close eye on Asha as she seems wayward.

Realising he needs to speak to his daughter, Dev heads back to the flat but when he leaves, Corey gives Asha a final warning – her dad is not welcome around their house.

Ever the peacemaker, viewers will see Mary Taylor (Patti Clare) call around Asha and Corey’s flat with a house-warming gift and Asha is touched by her generosity.

When the two settle down for the evening, Asha thanks Corey for a lovely day and admits she’s never felt happier.

Coronation Street fans will see the teenager suggests they get a couple of cats so they can be a proper family but it’s clear Corey doesn’t share her enthusiasm.

The next day, Corey bumps into Kelly who jokes with him and accuses him of turning into Mr Boring.

He suggests she is just jealous, but it’s clear they are enjoying the banter and flirting with one another.

With Corey becoming an adult overnight with a serious relationship with Asha, could a bit of fun with Kelly be just what he needs?

However, there is also the small matter of pregnancy being mentioned – does Dev suspect his daughter will end up having a baby with Corey?

If Corey isn’t ready to have a cat with Asha, there is no chance he is ready to bring up a child.

It comes after Coronation Street’s boss, Iain MacLeod spoke about a hard-hitting storyline that will involve Asha and Nina.

“A huge story for next year involves Asha, Nina, Aadi, Kelly – they will be mixed up in a hard-hitting story [that’ll have] massive ramifications for Roy and Abi.

“It’ll be one of our biggest, serious social responsibility stories next year by a margin.

“It’s incredibly sad and tragic but a really important story,” he added.

And if fans were hoping for Asha and Nina to reunite, it seems unlikely.

“There’ll be a fantastic and unique love story for Nina, which might not entirely end up where you expect now,” Iain added.

“The love story will turn into a massive social issue story that deals with tolerance of people who are part of minority communities and don’t look like everybody else.”

“It’ll become a real talking point for next year – how does the world view people like Nina in reality?”