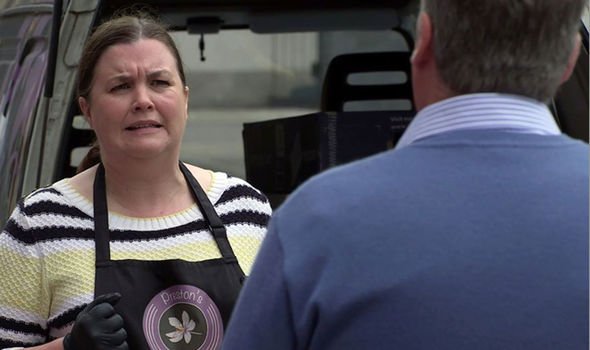 Mary Taylor (Patti Clare) has had a stressful few weeks in Coronation Street.

She’s been super busy rehearsing for the local AmDram play, dashing around and trying to sort scripts with Ken (William Roache), and perfect her talent because let us tell you, she is talented.

Mary’s acting skills were perhaps misinterpreted by Nigel recently, as he mistook her passion for something far too over the top and wanted to do change it.

Nigel enlisted the help of Martha (Stephanie Beacham), a glamourous travelling actress who also happened to be one of Ken’s exes. Martha was able to help Mary and even assisted in some breathing exercises and this week, she comes to the rescue once more.

As it becomes apparent the theatre has flooded, Ken secures the bistro and sets up the play in there.

To make matters worse, the team are then told one of the leads has broken a leg – so Martha steps in and saves the day.

With the reviews in, Brian (Peter Gunn) tries to show Mary, but she refuses, convinced the whole performance was a disaster.

By this point, Christmas is days away and Mary is planning on going carol singing with Glenda (Jodie Prenger).

Sadly, Glenda reveals that she’s no longer free, so Mary asks Brian to join her instead.

Mary’s delighted when he agrees as Brian gazes at her fondly…do we sense a Christmas romance?

A kiss under the mistletoe for these two?