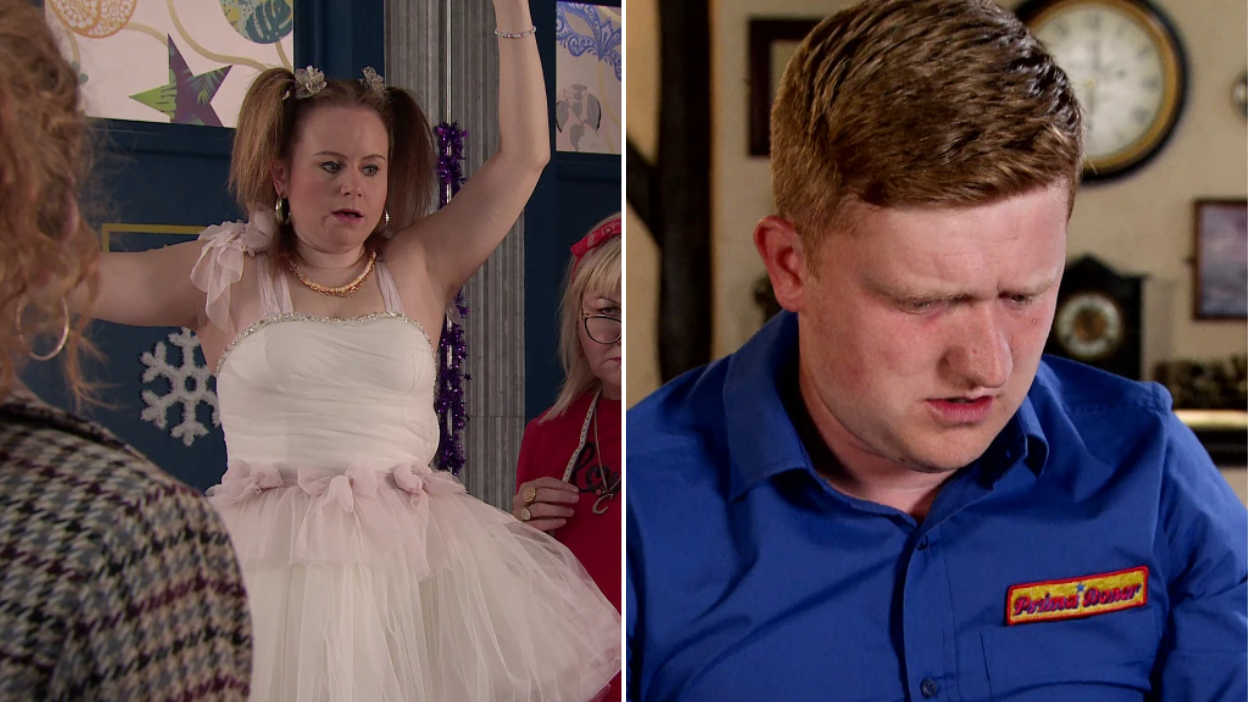 In the real world many people are struggling financially as the cost of living crisis bites, and in Coronation Street it’s no different. For some families more than others, it’s a daily struggle to get by.

One of these is Gemma (Dolly-Rose Campbell) and Chesney (Sam Aston) and their family of five children – including four young quads, Aled, Bryn, Carys and Llio, who were born in 2019, plus Chesney’s son Joseph (William Flanagan). Having to provide food and other essentials for five children is a constant struggle for Gemma and Chesney, even with Gemma’s mum Bernie (Jane Hazlegrove)’s help, as Dolly-Rose Campbell explained to us.

‘They literally have to count every penny,’ she said. ‘The cost of living crisis is hitting a lot of people and when you have five children to feed and a house to heat and all that washing to do and get dry it is a challenge to make the money go far enough.

‘They are both working, she is at The Rovers, Chesney at the kebab shop and Bernie at the cafe, so the three of them have also got to juggle who is going to be at home to mind the kids. Paul (Peter Ash) also helps out too. Having one child is a full time job so having five in the house is a lot to deal with whilst also trying to hold down their jobs which they need for the money.’

Dolly said that it’s often a struggle for the family to keep their head above water.

‘It is completely hectic,’ she told us.

‘It is like a constant treadmill. She feels like a hamster on a wheel just running round and round. They are constantly organising everything for the kids, the meals, the washing, trying to keep the house tidy, making sure they get playtime. She wants to ensure they are getting all the right stimulus to help them learn and develop. They take it in turns to go to nursery, two of them go one day and two go another so they never have a day without having children around, because it is too expensive they have to make the most of the free places.’

While Gemma often comes across as a lively and optimistic character who often provides comedy in scenes, Dolly said that like a lot of people her character is currently, ‘Just weary with it all. It is exhausting, it is like she is swimming but she is treading water and not actually getting anywhere.

‘She takes every day one day at a time and she is just trying to do her best for her family.’