The Doom Patrol (or is it the Doom Force?) has a brand new mission following Thursday’s third season finale — giant genitalia beware!

Not only did the hectic hour bring an end to the Brotherhood of Evil (what was left of it, anyway), but it also gave us the long-awaited showdown between time-traveling frenemies Madame Rogue and Rita Farr, which ended with Rouge apologizing for killing Malcolm. “You have every right to kill me, but I’m not worth it,” she told Rita, causing her to loosen her stretchy grip on Rouge’s neck.

The whole ordeal triggered a fresh perspective in Rita, who suggested that the Doom Patrol could become “weapons… for good.” When Jane asked if Rita meant that they’re becoming “super f–ing heroes,” she simply replied, “We’re not perfect, but we’re trying to be good, which is more than most.” (Ain’t that the truth.)

Whether Madame Rouge is now an official member of this newly heroic Doom Patrol “depends on who you’re asking,” showrunner Jeremy Carver tells TVLine, adding that it’s fair to call her “Doom Patrol adjacent” for now. Moving forward, she’ll do her best to meet Rita’s lofty expectations by battling her own darkest impulses, though “she doesn’t necessarily want to be good. It’s possible to live in a space where you recognize the virtues of sometimes being bad.”

Of course, showing mercy to her sworn enemy was just one example of Rita “stepping up” and owning her new leadership position. Bringing her experience in Cloverton full circle, Rita also saved the town from being destroyed by Cliff, whose brain has been transplanted into the body of a much larger robot.

“Cliff’s [previous] robot body was damaged, but I don’t know if I’d say it was officially squished,” Carver says. “For us, this was a fun opportunity to take Cliff’s small problems and extend them times 100. Now he’s an even more massive version of himself that he hates, which was interesting for us to explore. We’re excited to take this trip and to see where it leads us by the end of Season 4.” 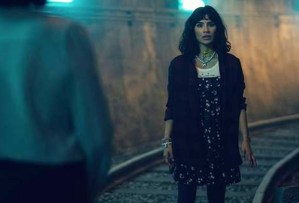 As for Jane, the super scream that Kay let out in last week’s episode apparently triggered a collapse in the Underground. And while Jane was able to rally all of the personalities to return and fight their way back in, she first had to promise Dr. Harrison that she could become Kay’s primary — and the good doctor isn’t about to let Jane wiggle out of that commitment.

The episode ended with the Doom Patrol traveling a blistering three minutes into the future to battle a giant scrotum at the Suez Canal, but Carver isn’t ready to say how much of a role time travel will continue to play on the show moving forward.

“That’s getting a little ahead of ourselves,” he says. “But I will say that, when you think about it, there’s an awful lot of types of vehicles in that garage.”

Regardless, we’ve definitely entered a new — possibly more heroic — era for the Doom Patrol. “They’re realizing that what happened before isn’t working out for them,” Carver says. “There must be something better than this. For Rita to make that plea, and for each of them to stand up and accept it, laid the groundwork for a fresher beginning. It was a little more of a closed ending than we typically do, but it was meant to see if the Doom Patrol will be able to collectively enter this new chapter together.”

Your thoughts on the Doom Patrol finale, as well as Season 3 overall? Grade them both in our polls below, then drop a comment with your hopes for Season 4.