”House of Gucci“ and ”Resident Evil: Welcome to Raccoon City“ also opened in previews ahead of Thanksgiving 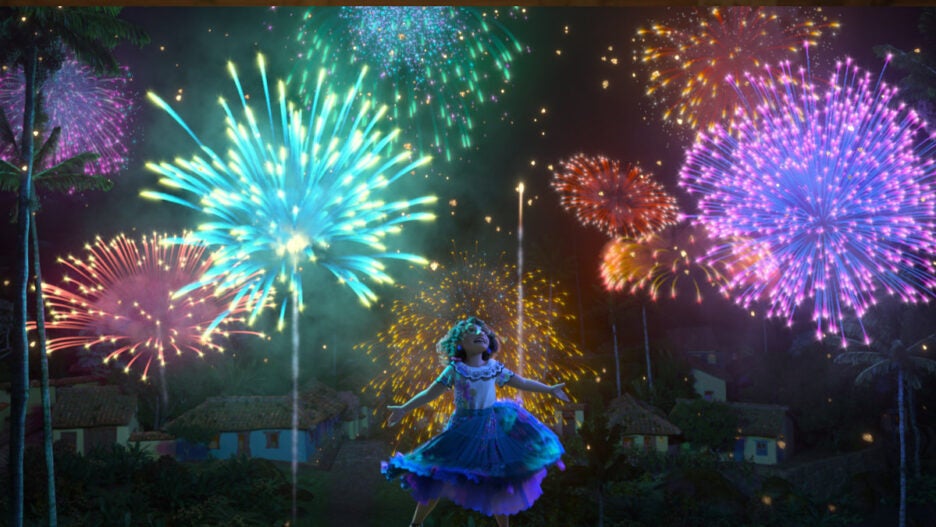 “Encanto” opens alongside MGM’s “House of Gucci” starring Lady Gaga and Sony/Screen Gems’ “Resident Evil: Welcome to Raccoon City,” a reboot of the video game action and horror franchise. “Encanto” has a chance to top the box office in its debut with a projected 5-day opening between $35-40 million. Though “Ghostbusters: Afterlife” is also coming on strong for its second week in theaters, tracking to $30-35 million in the holiday weekend.

“Encanto” opens in the U.S. and Canada Wednesday on 3,980 theaters, including over 600 premium large format screens and 1,300 3-D locations, and over 300 theaters will also offer “Encanto” dubbed into Spanish. Disney is giving the film a 30-day exclusive theatrical window before putting it on Disney+ on Christmas Day, and it makes it the first major animated, family film to open only in theaters during the pandemic.

That makes it tricky to find ideal box office comparisons, but Disney’s “Moana” made $2.6 million in its preview screenings that began on a Thursday, and it wound up grossing $56.6 million in its opening weekend.

“Encanto” is a musical about a Colombian family living in a magical house that gives everyone inside superpower abilities, everyone except one girl who realizes that with her ordinary skills, she may be her family’s last hope when her town becomes in danger. Stephanie Beatriz leads a voice cast that also includes María Cecilia Botero, Wilmer Valderrama, Adassa, Diane Guerrero, Mauro Castillo, Angie Cepeda, Jessica Darrow, Rhenzy Feliz, Carolina Gaitán, Ravi Cabot-Conyers and John Leguizamo. It has a 94% on Rotten Tomatoes.

“House of Gucci” is the latest film from Ridley Scott and stars Lady Gaga as Patrizia Reggiani, an Italian socialite who married Maurizio Gucci and eventually conspired to have him murdered after their separation. The film is looking at an opening between $15-18 million over the 5-day weekend.

Scott’s film also stars Adam Driver, Jared Leto, Al Pacino, Jeremy Irons and Salma Hayek, and the film has been polarizing among critics as either a love-it or hate-it spectacle, including a lot of discussion about some of the more eccentric performances from Gaga and Leto. It currently has a 66% on Rotten Tomatoes.

Finally, “Resident Evil: Raccoon City” is Constantin Films’ origin story based on the Capcom video game franchise. The film opens on approximately 2,800 locations on Wednesday and opened in over 2,320 locations on Tuesday with preview screenings beginning at 3 p.m. The studio is projecting an $8-10 million start against a $25 million budget.

The new, rebooted film in the franchise is directed by Johannes Roberts and is the story of a woman investigating the pharmaceutical giant Umbrella Corporation and how they turned the Midwestern town of Raccoon City into a dying wasteland with great evil brewing beneath the surface. The film stars Kaya Scodelario, Hannah John-Kamen, Robbie Amell, Tom Hopper, Avan Jogia, with Donal Logue and Neal McDonough.

Also opening this weekend but not in previews and in just four select locations on Friday is MGM and United Artists’ “Licorice Pizza,” the latest film from director Paul Thomas Anderson. It opens wide on Christmas Day.