Home » Eurovision's 9 Most Famous and Bizarre Moments, From ABBA to Russian Grandmas (Videos) 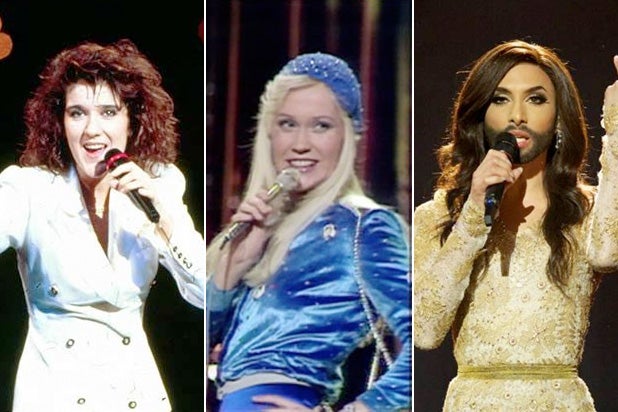 Eurovision’s most famous winners are undoubtedly Swedish band ABBA, who managed to take their win in 1974 for “Waterloo,” and build it into international stardom.

Another famous victor is Celine Dion, who rose to stardom through Eurovision before “My Heart Will Go On” ensured her everlasting fame.

Eurovision’s first big song came from Italian singer Domenico Modguno back in 1958. The track was called “Volare,” and although it didn’t win, it reached the top of the U.S. Billboard charts for five weeks and nabbed two Grammys. David Bowie, Frank Sinatra, and Andrea Bocelli are among the singers who have put their own spin on the song.

In 2014, Eurovision made headlines again when LGBT star Conchita Wurst claimed victory for Austria. Conchita’s win was attacked by Russian conservatives as a sign that the European Union would lead to moral corruption in Russia, but that didn’t stop Conchita from becoming the biggest icon Eurovision had produced in years.

2012’s competition was won by the Swedish singer Loreen and her song “Euphoria.” The song received critical acclaim throughout the continent, topped the charts in 17 countries, and is regarded as one of the best songs ever performed on Eurovision.

Not all of them are masterpieces, though. Latvian group Pirates of the Sea made a song called “Wolves of the Sea” that may go down as the cheesiest pirate song ever made. Surprisingly, it became a smash hit in South Africa, where it has become an anthem for their national rugby team.

From time to time, the Nordic countries eschew europop and send in a heavy metal band to liven things up. For Finland, this tactic actually gave them their first win in 2006, thanks to the monster band Lordi and their song “Hard Rock Hallelujah”

One of the more beloved acts in recent memory was Buranovskiye Babushki, a group of eight Russian grandmas that finished as runner-ups in 2012.

Some former contestants from “The X Factor” have competed on Eurovision. The most infamous was the Irish twin group Jedward, who were beloved by British teen girls but by no one else. They finished 19th.
Source: Read Full Article