NORTH West brought fans inside her little corner of the $60M mansion mom Kim Kardashian shares with her and siblings Saint, Chicago, and Psalm, sharing a TikTok video of her and her sister playing with Fendi-clad dolls in her adorable pink room.

In the video, posted to the TikTok account North, 8, shares with mom Kim, 41, she narrated a play scenario featuring dolls and sister Chicago. 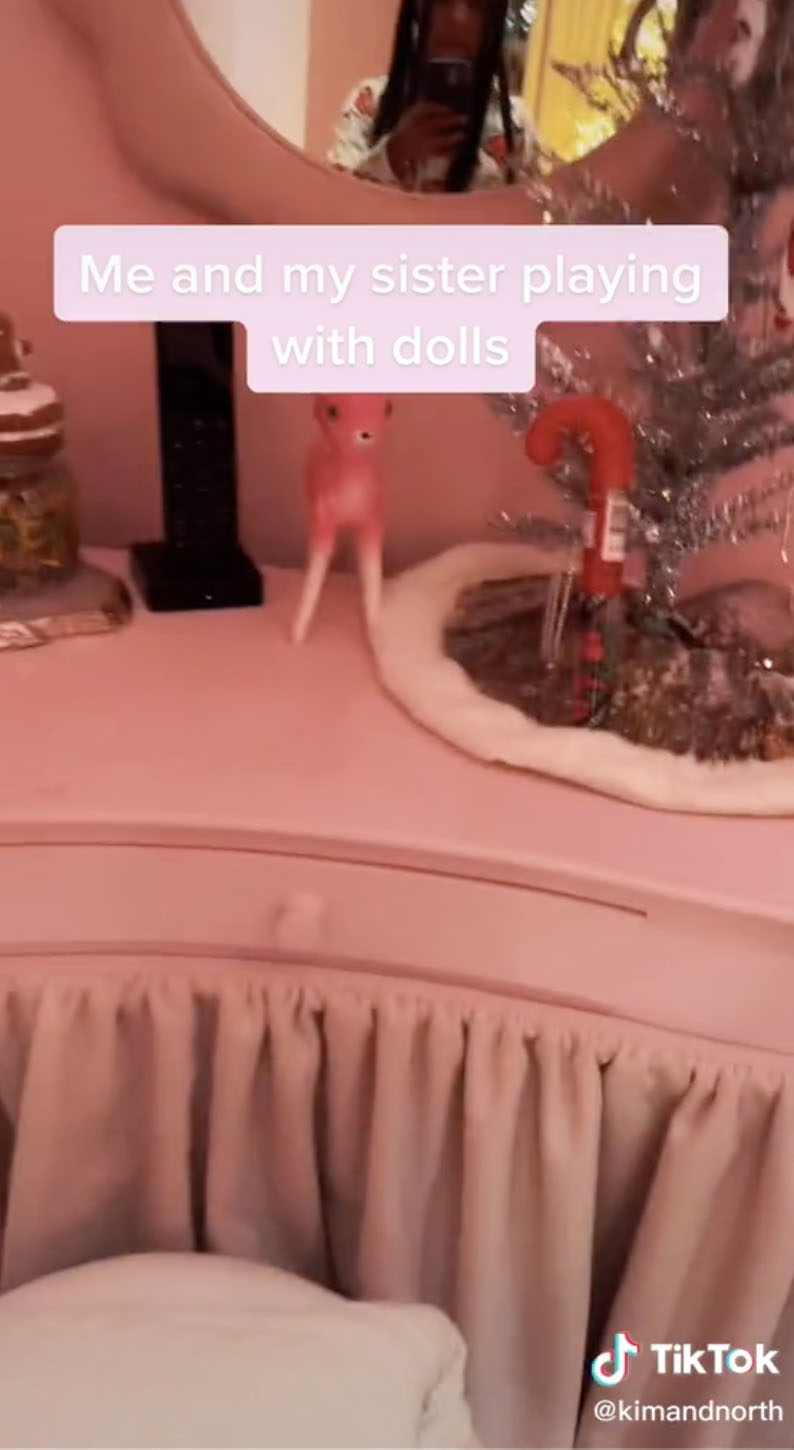 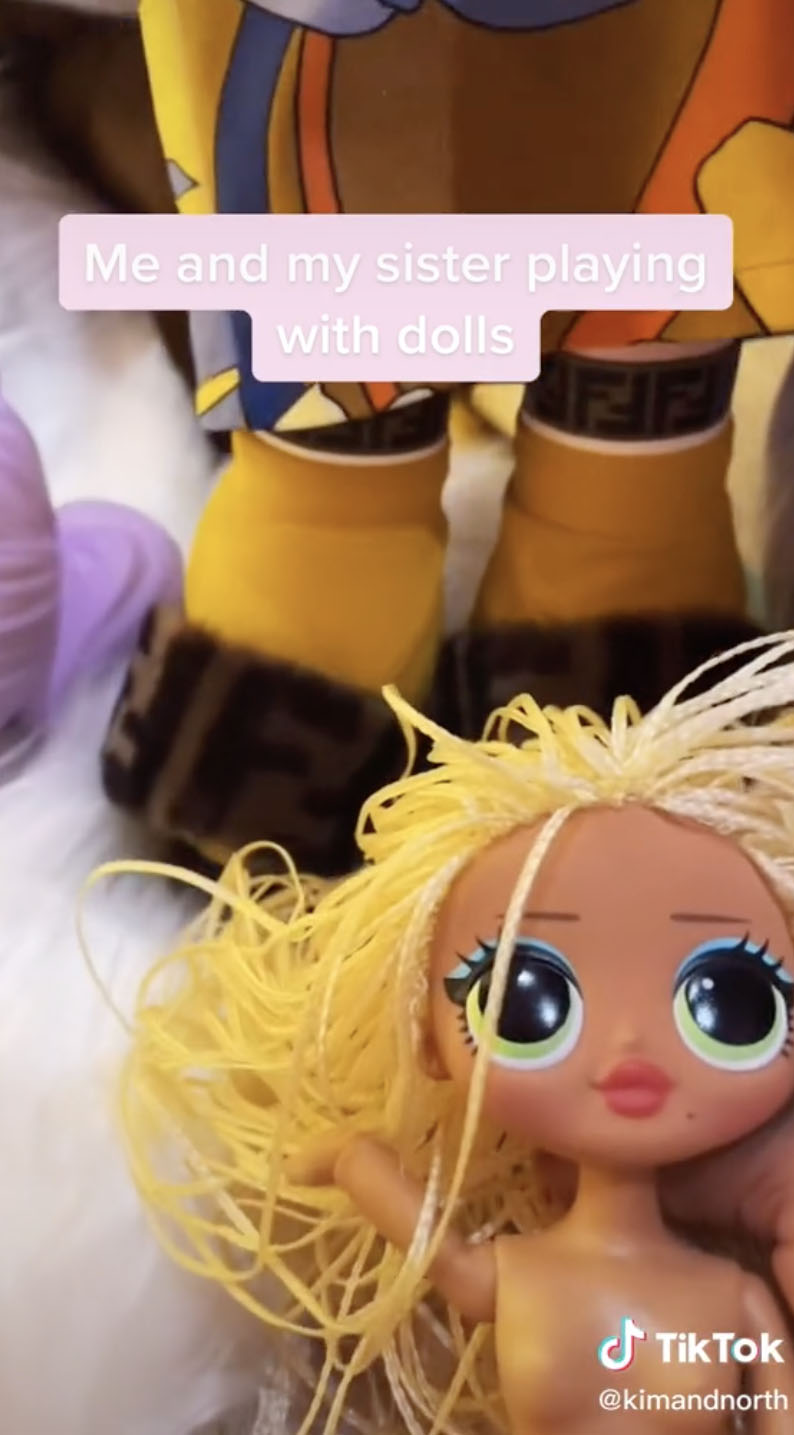 The pair pretended to be mother and daughter, playing under a Christmas tree in the house before venturing to a different part of North's room.

As they played, North gave fans glimpses into her bright pink bedroom.

She showed off a pink vanity station set up next to her bed.

In a mirror, a large TV behind her could be seen mounted on a wall near the Christmas tree she and Chicago were playing under when the clip began.

The room appears to be decorated in a monochromatic manor, with all the furniture and the walls being the same shade of light pink.

the floors are white, as seen in the video, but there is a light pink rug covering a portion.

The clip was captioned: "We're having so much fun."

North's bedroom was decorated for the holidays.

In addition to a large Christmas tree situated on the floor on one side, she had a pink glittery nutcracker, a silver tinsel desktop tree, and a pink glittery reindeer sitting on her vanity.

She referenced some of the decorations in her TikTok, directing Chicago: "Let's go under the Christmas tree," and "It's a nutcracker! And a elf."

North's room isn't the only portion of the house decked out for the holidays.

The Kardashian family spares no expense nor decoration when it comes to Christmas and Kim is no exception.

She posted video showing off her Christmas tree and other decor earlier this week.

Kim revealed that she hired a professional pianist to "wake her kids up every morning to Christmas music."

The musician, Philip Cornish, agreed to do this every morning throughout the month of December.

She explained: "Every morning during the month of December @philthekeys comes to play Christmas music on the piano to wake up the kids."

Kim showed off her minimalist-designed living room via her Instagram Story while holiday music played on the piano in the background.

The KKW Beauty founder showed off her massive Christmas tree, which towered over the living room.

Next to the tree were two life-sized reindeer.

Through a wall of floor-to-ceiling windows, Kim showed off a small glimpse of her backyard.

The well-manicured space featured a forest of trees, also covered in sparkling lights.

Over the weekend, Kim gave fans even more of a glimpse into her well-decorated home.

In a TikTok video, she showed off her ornaments and the decorations she put out in her living room.

The clip featured elves, ornaments, sparkling lights, and stockings hung on a fireplace.

There was even a stocking for Kanye West, Kim's estranged husband.

Kim won her $60M mansion in their divorce settlement.

She filed for divorce in February.

The move comes amid a rumored romance with Saturday Night Live's Pete Davidson.

Kanye, who goes by Ye, continues to profess his love for Kim in an attempt to win her back. 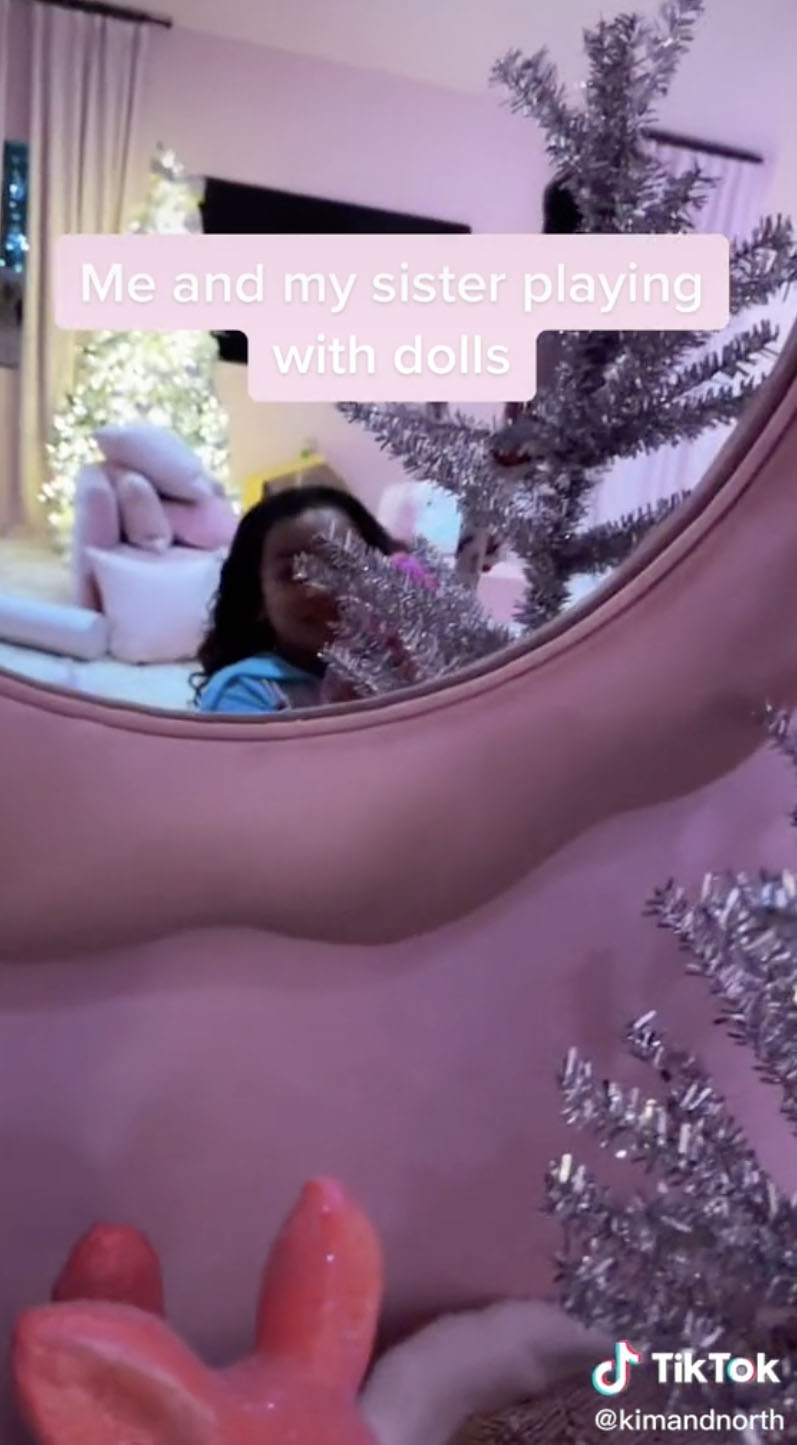 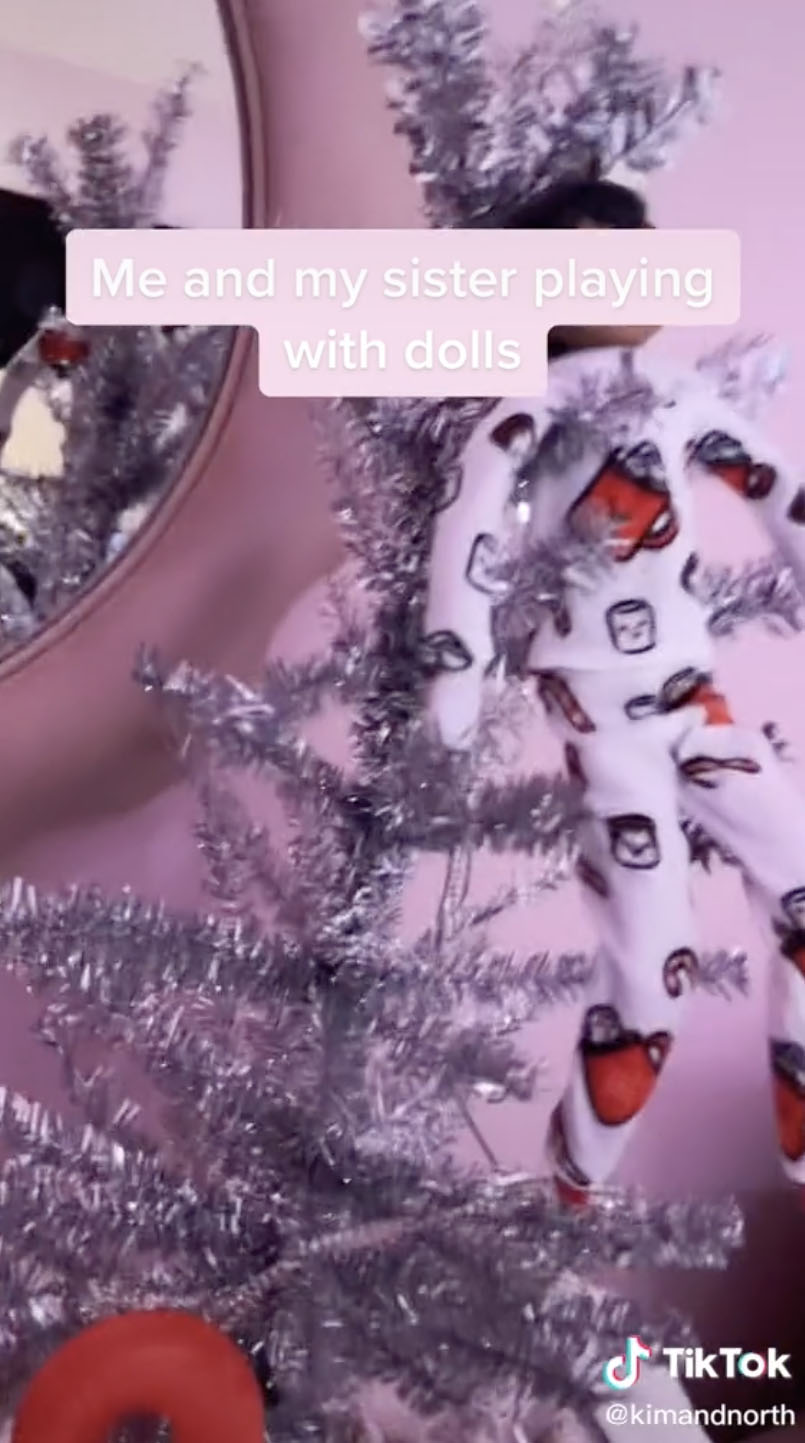 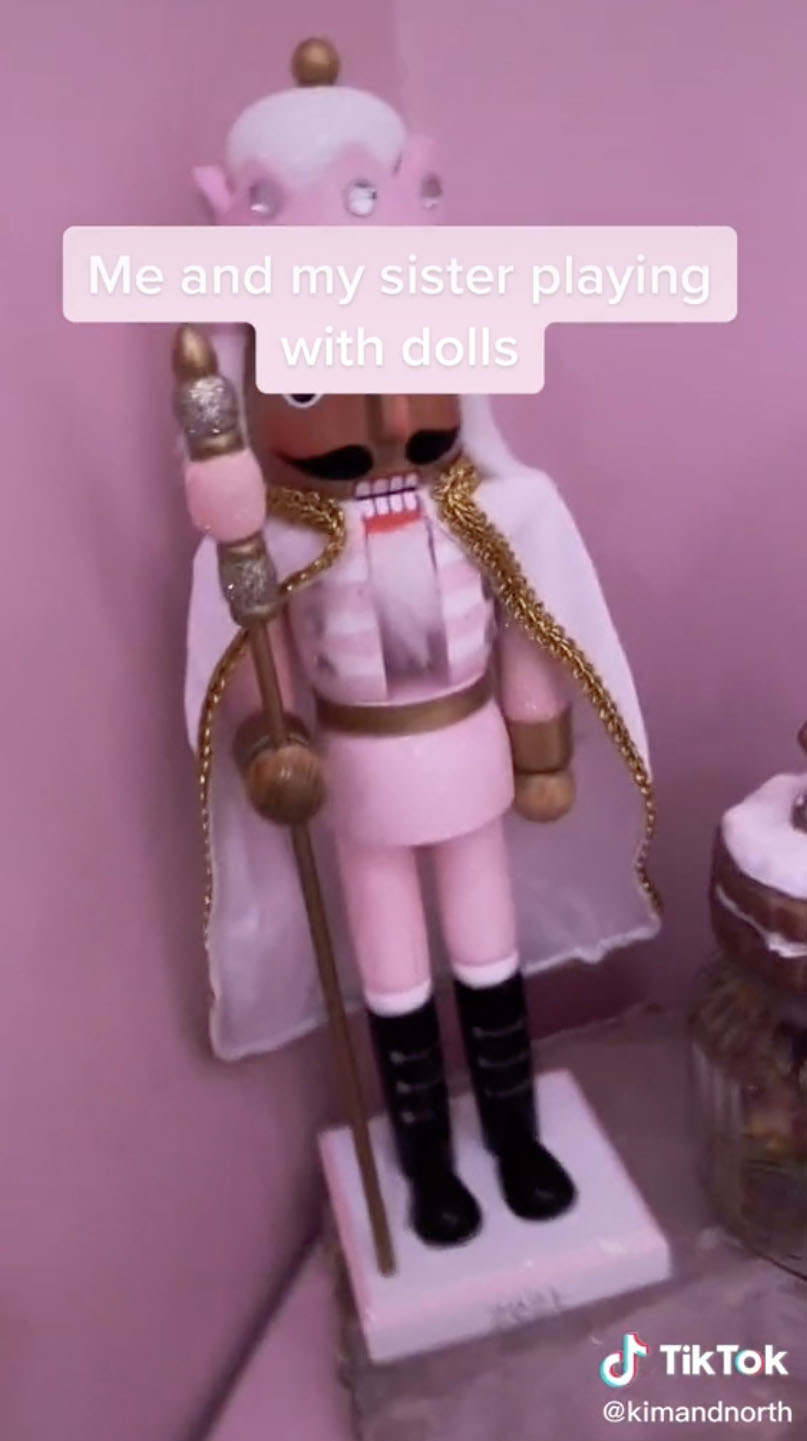