Colorism within the Black community is never an easy issue to tackle. But Fox’s sudsy new drama Our Kind of People attempted to do just that on Tuesday’s installment, titled “Hot Links & Red Drinks.”

The issue arose when it was revealed that Nikki (Alana Bright) had gotten into a fight with a girl at her former high school because the girl had made fun of her grandmother’s dark skin. Things got worse when the Black, rich and vicious residents of Martha’s Vineyard celebrated Juneteenth and Nikki overheard three teenage partygoers joking about being “house slaves” and not “field slaves” because of their light skin.

Nikki, who still hadn’t dealt with the trauma of the fight, snapped and started swinging on the most vocal of the girls and even pulled her hair. She also chastised them for resorting to antiquated “paper-bag test” tactics.

Morris Chestnut, who stars on Our Kind of People as the well-heeled and well-connected businessman Raymond Dupont, says he’s proud that series creator Karen Gist and her writers dared to take on such a heady topic. The show also celebrates dark skin: In Episode 1, Aunt Piggy (Debbi Morgan) coquettishly wonders if “chocolate melts in the summer” because she’s attracted to Tyrique’s (Lance Gross) dark hue. 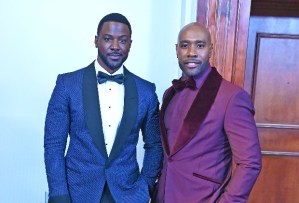 “Colorism is definitely an issue within our culture,” Chestnut tells TVLine. “It’s definitely something we had to explore in this series, and it’s something that should be talked about because it’s one of those unspoken things. People have certain thoughts and ideas about it, and it was important for me.”

Chestnut adds that Our Kind of People also course-corrected any criticism it might have faced by recasting the Leah role with actress Nadine Ellis when a lighter-skinned LeToya Luckett was originally chosen. “I’m just very happy Nadine got the role,” Chestnut divulges diplomatically.

Actress Tasha Smith, who directed the first two episodes of the show and acted as a casting consultant, agrees.

“To tell stories in a way that none of us have seen is necessary, especially when you employ beautiful, dark-skinned, chocolate women,” Smith surmises. “The roles that Yaya [DaCosta, who stars as Angela] and Nadine are playing are not roles we always get as darker-skinned women. I wanted to see myself on the screen.”