When I was a kid in the ’90s, I read The Baby-Sitters Club nonstop. I lived for the gossip, the boy drama, and the babysitting adventures of Kristy Thomas, Mary Anne Spier, Claudia Kishi, Stacey McGill, and Dawn Schafer. It was like they were my friends too. And I’m relieved to say the reboot is just as delightful as the books. Every single episode title in both Season 1 and Season 2 is ripped from Anne M. Martin’s series, and while some of the storylines have been remixed a bit, it’s pretty much the same story we all know and love.

The moment I started watching the show, alllll the details came rushing back. I was remembering things I hadn’t thought about in more than two decades: Kristy’s visor. Nobody wanting to sit for the Barrett kids, aka the Impossible Three. Grandma Mimi affectionally calling Claudia “my Claudia.” (Yes, that Claudia story is in Season 2, brace yourselves.) But it’s been nearly 35 years since the first Baby-Sitters Club book was published, so it’s only natural that some things would change. Don’t worry: there are still plenty of things that didn’t change, like Claudia stashing candy all over her room, Stacey’s diabetes, and the iconic landline phone. But here are the biggest differences between the books and the show.

[FYI, there are some spoilers ahead for both seasons of The Baby-Sitters Club. If you want to watch spoiler-free, maybe come back to this post later!]

The story takes place in the present day.

The first Baby-Sitter’s Club book, Kristy’s Great Idea, was published in 1986. But the Netflix series takes place today, almost 35 years later. In the show, the girls frequently communicate over text and email and use Google to schedule babysitting jobs like the young entrepreneurial women they are. There are also jokes about selling personal information to the Russians, references to The Handmaid’s Tale, and a New Moon in Scorpio ritual. Peak 21st century, if you ask me. 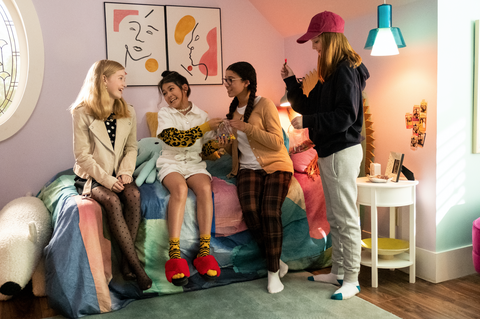 The world of Stoneybrook, Connecticut, is more inclusive.

The original series was pretty lacking in diversity. Aside from Claudia being Japanese- American and Jessi being Black, there wasn’t much representation. That changes in the Netflix series. Mary Anne is biracial, Dawn is Latinx, and Dawn’s dad is gay. There are other LGBT characters mentioned throughout too. In Season 2, Claudia’s sister Jeanine confesses that she has a girlfriend, and Dawn essentially comes out as pansexual — though her exact words were that she hates labels and could end up with anyone on the gender spectrum. Progress!

Some of their regular babysitting clients are more diverse too.

The kids the babysitters watched in the books were pretty much all white. But that changes in the series. Charlotte Johanssen, one of the club’s regular charges, is now Asian, and her mom, Dr. Johanssen, is Black. There’s also a new character, Bailey, a transgender girl who helps Mary Anne understand why it’s important for someone’s outside to match their inside.

The girls are Feminists with a capital “F.”

Don’t get me wrong, the books celebrated female friendship and championed female empowerment, but the show takes it to another level. The babysitters quote Michelle Obama, engage in witchy rituals, preach the importance of women supporting women, and constantly check each other’s language. At one point, they refer to one of Claudia’s outfits as “Ruth Bader Ginsburg chic.”

And they all care about social issues.

In 2020, the babysitters are smart, informed, and sensitive to cultural and political issues. At Camp Moosehead, Dawn campaigns for climate change and leads the campers in a protest about income inequality. The babysitters also know what they don’t know and are always eager to learn. For example, Claudia learns about Manzanar, the concentration camp where her Japanese American grandmother Mimi lived for three years as a young girl, and it’s really powerful.

Kristy is a liiittle bit meaner in the show.

Not a lot! But she is noticeably more angsty. She isn’t a full-on mean girl, but she tends to take her bossiness further in the show than she did in the books, not that we blame her. She’s confused about why her dad left, she has mixed feelings about her mom marrying Watson, and she’s jealous that everyone else’s dads can show up for them no problem. By the second season, she’s chilled out much more.

In both the books and the show, Stacey moved to Stoneybrook from New York City because people judged her for having diabetes. She originally keeps her illness a secret from The Baby-Sitters Club so they won’t think less of her. But the details play out a bit differently in the show. The BSC’s short-lived rival The Baby-Sitting Agency resurfaces an old video of Stacey having a seizure in an attempt to make her seem like an unreliable sitter. (It doesn’t work and it’s also very mean.)

The girls’ nemeses aren’t all that evil.

Kristy’s new rich neighbors a.k.a. “The Snobs” are a source of conflict both in the books and on the show, but that conflict is pretty much resolved by the end of the episode. Instead of mocking the Thomas-Brewer’s dog, the Delaneys ultimately bond with them over a shared love of animals. It’s much more major in the books.

They aren’t the only characters who are a little bit softer and more sympathetic in the Netflix series. Claudia’s artistic frenemy from the books, Ashley Wyeth, is now her older sister’s super cool influencer girlfriend. Derek Masters, the “Superbrat” who was a TV star in the books and is a Youtuber on the Netflix series (obvs) also has more wisdom to share than antics.

The parents’ relationships are a little more modern.

Mary-Anne’s father and Dawn’s mother get married in the books, but on the show have opted for a more casual dating relationship. Watson Brewer and Elizabeth Thomas-Brewer’s adoption story also plays out a little differently in the Netflix series versus the books. In Ann M. Martin’s books, Kristy’s mother and stepfather adopt a Vietnamese toddler and name her Emily Michelle.

But at the end of Season 2, after making plans to add to their family with a new baby, Watson instead asks Kristy and her brothers if they would like to be legally adopted by him in their birth father’s seemingly irresponsible absence. This isn’t to say that Emily Michelle won’t be a new addition in the future of The Baby-Sitter’s Club on Netflix, but it was an emotional moment and a reminder that there are many ways to build a family.