Truth is always stranger than fiction, and in the case of “The Lady and the Dale”, wildly so. HBO’s four-part docu-series, executive-produced by the Duplass Brothers and directed by Nick Cammilleri and Zackary Drucker, charts the improbable story of Elizabeth “Liz” Carmichael, a larger-than-life entrepreneur who developed a fuel-efficient three-wheeled car named The Dale at the height of the 1970s oil crisis. While The Dale was her crowning achievement, Carmichael’s life took more twists and turns than the futuristic three-wheeler’s ill-fated test run.

Part investigative mystery, part eccentric character study, “The Lady and the Dale” renders Liz’s adventurous life with inventive zeal, using whimsical paper cutout animation to bring life to the decades-old characters. A subject of media fascination at the time, Liz’s identity as a transgender woman became inextricably linked to her duplicitous business dealings, making her a powerful real-world example of the “trans deception” trope at its most insidious. Her trans-ness is explored with tender nuance; carefully extricated from the more complicated parts of her story and contextualized in trans history. While not the whole story, this is one of the reasons “The Lady and the Dale” is essential viewing.

Such an artful approach to this layer is undoubtedly Drucker’s influence; the filmmaker and multimedia artist’s work is devoted to discovering and preserving trans history. Her vast trove of knowledge is all over “The Lady and the Dale” if you know where to look. In between animated segments and sit-down interviews, the series uses rare archival footage of early trans cinema, stitching these silent snippets into a collage of shared experience. Such scenes often play under narrations by the scholar Susan Stryker, who brilliantly translates complex and wide swaths of trans history through an accessible lens.

The series begins with Liz’s early life as a handsome small-time grifter on the run from the FBI on charges of counterfeiting. As is explained in the series, then Jerry Dean Michael knew how to come by money easily, and conscripted wife Vivian and her brother Charles into early schemes. Vivian supported Liz’s transition, and so did their five children, who learned to say “Mommy!” loudly in the grocery store to avoid suspicion. All of the friends and family interviewed remember Liz fondly as the woman she was. 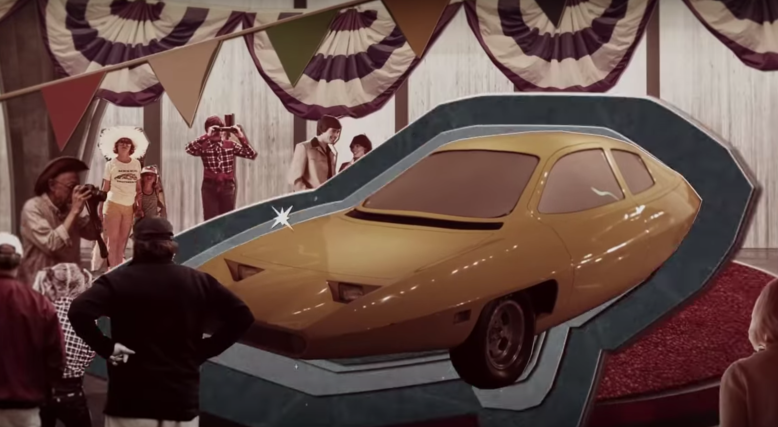 “The Lady and the Dale”

After years on the run from the FBI, Liz’s transition afforded her relative peace and anonymity for a time, though that is not why she transitioned. She encountered Dale Clifft’s three-wheeled car while living in Encino, California, and partnered with him to develop The Dale, which she named after him. In 1974, Liz started the Twentieth Century Motor Car Corporation, named after a fictional company in Ayn Rand’s “Atlas Shrugged.” (Liz had great disdain for government interference in her life and business, with good reason.) Advertising 70 miles to the gallon, money started pouring in from investors big and small.

With interest in The Dale mounting and Liz’s unique position as a woman in the auto industry, a local TV reporter named Dick Carlson began an obsession with Liz. As a colleague from the time describes it, “Dick’s alarm went off” when he shook her hand. Throughout 27 TV segments, one of which won a Peabody Award, Dick Carlson ruthlessly dug into The Dale and Liz herself, eventually outing her as trans on the air.

The Dale’s limitations eventually caught up with Liz, and Liz and her associates were charged with fraud. Over a punishing nine-month trial, Liz defended herself against the allegations, but also from the media’s invasive fascination with her gender identity. Her gender quite literally went on trial when she filed a motion to be referred to as a woman throughout the proceedings, which she won. Most of the footage of Liz is from on-camera interviews during this time, where she appears exhausted but vivacious, determined to clear her name and restore her company to its former glory.

“She was on trial as a trans person,” Stryker explains. “If she was a fraud, then the car was a fraud.”

Expanding from its main subject, “The Lady and the Dale” shows how Carlson was the primary driver of this narrative. He would later out professional tennis player Renée Richards, just as he had done to Liz. Remarkably, Carlson sat for interviews for this series, in which he constantly misgenders Liz and spews hateful rhetoric. Just as he felt about Liz, something seems off about Carlson. As it turns out, he’s the father of Fox News anchor Tucker Carlson, whose vicious obsession with trans people continues to this day. A brief but powerful supercut, in which the Carlsons’ ruddy faces and shrill howling meld together, shows how the media’s cruel and unusual treatment of Liz Carmichael is directly linked to its assault on trans rights today.

Liz Carmichael traversed many miles across the U.S., both its superhighways and painful chapters. The Dale never made it to production, but Liz always found ways to survive. “The Lady and the Dale” weaves each unbelievable twist of fate into an astonishing pastiche of industry and identity, on scales both national and personal. Though many mysteries remain, Liz’s daughter Candi reviews the important stuff: “The woman was a woman. The car was a car.” The rest is history.

“The Lady and The Dale” premieres on HBO on Sunday, January 31st.