Home » TV & Movies » Trent Reznor and More on Scoring a Movie During COVID: 'Like Trying to Be Intimate in Hazmat Suits'

Reznor, Atticus Ross, Daniel Pemberton and George Clooney talk about the challenges of recording music during a pandemic 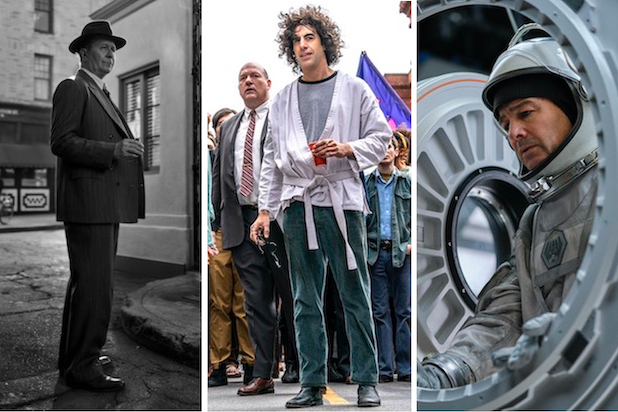 When it comes to the postproduction process on movies during a pandemic, much of the work doesn’t have to change dramatically. Film editors, after all, are used to sitting in dark rooms, often by themselves; sound editors and visual-effects artists can also do their work in front of computer screens and share it with co-workers without needing to be in the same room.

But recording a movie’s musical score is different. Unless a composer both writes and performs everything him or herself, a film score involves getting people together to play music — in the case of orchestral scores, getting lots of people together to play music. When George Clooney talked to TheWrap about finishing his film “The Midnight Sky” during the COVID-19 pandemic, for instance, he said recording the music was the single hardest part of the process.

And Trent Reznor, composer of the score to David Fincher’s “Mank” with Atticus Ross, had a succinct and evocative phrase for working on the music to that film in the early days of the pandemic. “It wasn’t impossible, but it felt like trying to be intimate in hazmat suits,” he said.

For Reznor, the challenges began in the composing process — which, for a film set in 1930s Hollywood, required him and Ross to replace their usual electronic music with everything from big-band jazz numbers to orchestral arrangements. “Our usual practice of scoring is it’s the two of us sitting in a room, and what leaves that room is the final project,” he told TheWrap. “But when COVID kicked in, it meant Atticus and myself not sitting next to each other. It became, ‘How are we doing to do this on a personal level?’”

The two men were still able to work in some kind of proximity, he said. “There’s a studio in my backyard, and I’ve got a place to work in my office. So we’re only a hundred yards away from each other, but there was another burden of not being able to have the language of glancing over at somebody and where he’s revising something while I’m doing something else, but I’m hearing what he’s doing the whole time. And I can at any moment say, ‘Hey, maybe that needs to be a little different’ or ‘Try it like this.’ It was just another layer of difficulty.”

But the trickiest part came in the performance, not the composition. In many cases, Reznor and Ross have recorded their entire scores themselves — but the music to “Mank,” which was supposed to look and sound as if it was a lost film from the 1930s or ’40s, needed to be performed by everything from small jazz combos to a large orchestra.

“Everybody had to record their parts at home,” Ross said. “We were doing it during the most intense lockdown in March. We had Conrad Pope on to help with the orchestral arrangements and Dan Higgins to help with the big band, and each player would be sent notes. I think at the beginning, there might have been a big Zoom for everybody, but it certainly wasn’t conducting in any way.”

Daniel Pemberton, who wrote the music for Aaron Sorkin’s “The Trial of the Chicago 7,” said that the entire movie was completed while he waited for the COVID protocols to allow musicians to record his score. “Everything was finished on the film except me,” he said. “I was the only person holding up the completion of the film, and obviously film producers and insurance companies want their film completed. And I’m like, ‘Well, we literally can’t record anywhere.’ We were looking all over the world at one point, which was the craziest thing. You hear, ‘Well, there’s one place in Georgia where we might be able to do a string session!’”

Rather than chase recording sessions around the world, he decided to wait until restrictions were relaxed enough in London for him to bring musicians into Abbey Road studios. “We were there the second weekend after the relaxations happened,” he said. “We had to split up the brass and the strings and make very complex plans about how we would work the days.”

Everything, he said, involved negotiations with health officials. Brass and string sections couldn’t come into the studio on the same day? How about if he shut off one area of Abbey Road and brought in a Hammond organist, who he only needed for three hours?

“Everyone was trying to do the right thing, but it was all new to everyone,” he said. “So we staggered the days and had very weird interactions with conductors who couldn’t come in the room, when I’m used to chatting to them face to face.”

Clooney’s film, “The Midnight Sky,” also recorded at Abbey Road, and also involved a conductor and composer, Alexandre Desplat, who wasn’t on the premises. “Alexandre couldn’t go to England, and he could only use 10 musicians at a time instead of a 150-piece orchestra,” Clooney said. “So he was conducting from Paris while doing sections of music, 10 people at a time. And I was up at 5 in the morning in my screening room (in Los Angeles) with Zoom on one side and a live view of the score on the other.

“I’ve done three other films with Alexandre, and I would always go to Abbey Road with him. You sit at Abbey Road and he conducts and you hear the whole orchestra play, and then you can say, ‘a little bit less tympani’ or ‘I think there’s more urgency in this scene.’ Alexandre’s conducting and I’m talking to Alexandre and it’s moving and flowing — and all of a sudden that’s just gone.”

Eventually, Clooney said, he got used to the new abnormal: “After a while, it just became kind of funny to get up at 4:30 in the morning to go score a movie in my downstairs screening room.”

Daniel Pemberton, too, said he eventually figured out how to work with the pandemic restrictions. “That magic of being in a room with all the players is so special, and the hoops we had to jump through were totally understandable,” he said. “Sometimes, your job is not really about composing music, it’s about getting it finished however you can. It’s about making the best possible score under whatever circumstances are thrown at you.”