Home » TV & Movies » Who Is Nathan Webb From Too Hot To Handle?

Summer is heating up just in time for “Too Hot to Handle” to make its triumphant return to Netflix! The show earned a cult-like following in 2020 after a wildly successful Season 1. If you haven’t seen “Too Hot to Handle,” think of it as a combination of “Love Island” and “Survivor” … as the contestants have to survive zero intimate contact.

A bunch of (very hot) twenty-somethings sign up to spend a few months somewhere remote and tropical and don’t really do anything except sit around and drink tropical drinks in their bathing suits all day. Obviously, they all want to hook up with each other. However, thanks to a bunch of wild rules, if they do anything more than holding hands (without getting permission from their computer overlord, Lana), large sums of money are deducted from the collective $100,000 prize pool.

Despite several significant deductions at the end of the first season, the remaining contestants managed to walk away with $75,000, per The Sun. This year, the celibacy challenge is still worth $100,000, but the new group of singles is sexier than ever. Especially Nathan Webb. Here’s everything you need to know about the “Too Hot to Handle” newcomer before the premiere.

Nathan Webb is the certain type of dancer 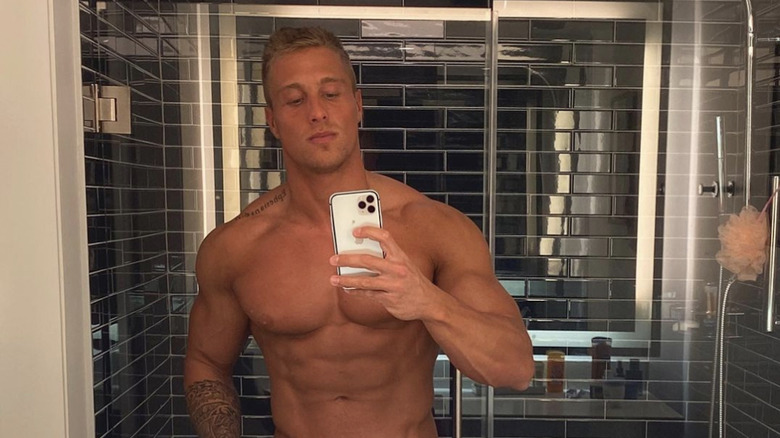 Nathan Webb is one of a few contestants on Season 2 of “Too Hot to Handle” that don’t hail from the U.S. Nathan was born and raised in the U.K. but moved to the U.S. in his twenties. It seems that Nathan has really taken to life here in America, as his favorite accessory appears to be a white cowboy hat — probably because he currently resides in Texas, per Bustle. His love for country music runs deep. Case in point; in a Season 2 Instagram promo, Nathan described himself as a mix of James Bond and Dolly Parton.

What else do we know about Nathan? What does he do for work? Well, besides climbing the Hollywood ladder as a budding reality star, Nathan is a dancer. What kind of dancer, exactly? We’ll let Nathan tell you himself. “Have you ever seen Magic Mike? That’s what I do,” he explained to “Too Hot to Handle” fans in another promo.

Besides his love of dance and Americana, Nathan spends a lot of time traveling with his family and doting on his little brother and sister. As of right now, that’s about all there is to know about Nathan. For any other updates, you’ll have to tune in to Season 2 “Too Hot to Handle” on June 23.