GMB: Piers clashes with guest over Meghan and Harry

Dr Shola joined Piers Morgan and Susanna Reid on Good Morning Britain to debate the future of Prince Harry and Meghan Markle after their interview with Oprah Winfrey, which was filmed last Tuesday. The presenters asked whether the Duke of Sussex should step down and surrender his place in the line of succession. While Piers thought he should give up his place in line, Dr Shola found the suggestion “preposterous”.

“I genuinely find that question to be preposterous,” Dr Shola began. “By not being a working royal does not mean he should remove himself from succession. It makes no sense.

“The issue here is not Harry and Meghan, the problem here is people like you Piers and Hugo, who want to punish Harry for marrying a woman you don’t like or having the audacity to determine his life of service as a royal member will be in a certain way. That doesn’t mean he can’’t be in the succession.”

Piers hit back: “Dr Shola, I think you’re being preposterous now, it’s to nothing to do with Meghan actually.

“It’s got everything to do with Prince Harry. Whether you like the pair of them is irrelevant actually. 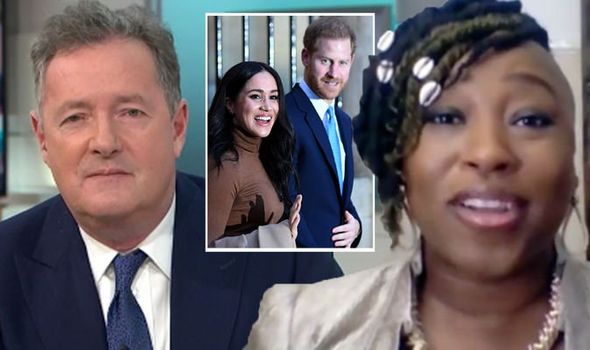 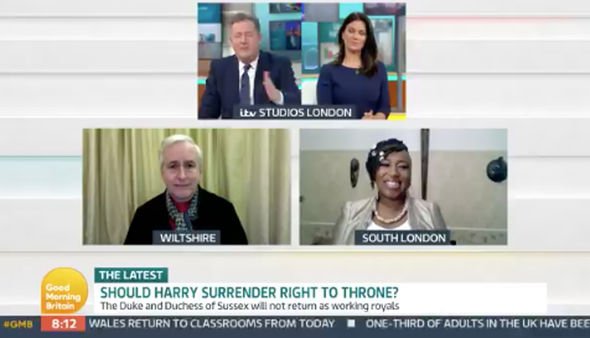 “Let me ask you this, did even you Shola in your blind adulation for these two not cringe slightly, at least slightly shudder when this privacy-minded couple had decided to spill their guts on Oprah for 90minutes on prime time American telly for gazillions but also they chose to film it on the very day the Duke of Edinburgh had been taken into hospital.”

“Let’s just address your blind adulation, there is no blind adulation because I might as well refer to you Piers as a petty, petulant, fragile man-baby, who can’t get his act together because Meghan rejected you,” Dr Shola continued. 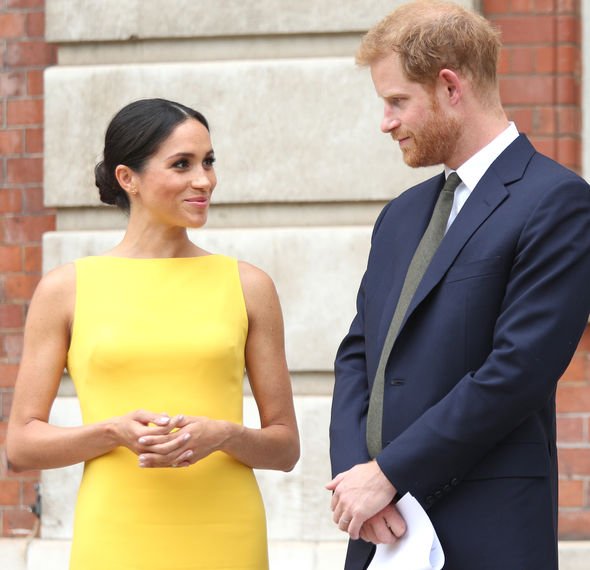 “The fact that it was going ahead on the same day as Prince Philip going into hospital, I don’t know what they were aware of. I don’t know if this had already been planned.

Piers hit back: “I think it comes down to this. I was one of their biggest cheerleaders right up to the wedding as you know.”

“Because you were rejected!” Dr Shola interrupted.

Piers replied: “Well hang on, let me respond. You have spray gunned me, let me just respond. I turned after the way they treated her father, which to me was disgraceful. You can take a different view and I know you do.

“After that there seemed to be a succession of times when this couple who quit royal life and quit royal duty for a life of privacy dd the complete opposite.

“It comes back to this question, ‘Why would a couple who have gone so far to remove themselves from an institution still be in line to succeed?’”

“I think we should all agree this question is preposterous, it’s a moot point,” Dr Shola replied. “The line of succession is fine and you should all leave Harry and Meghan alone as they’ve done nothing wrong.”

Piers hit back: “I cannot think of any human beings on this earth who have expressed less desire to be left alone.”

“All they said was no intrusion, that’s the difference,” Dr Shola explained. “You’re such a hypocrite!”

Good Morning Britain airs daily on ITV at 6am.