Home » World News » A life of caring for family and others

She was born Mary Stewart, the middle child of five to Nancy and Bob Stewart. At Spotswood Primary, she was awarded a scholarship and at Footscray High School was head prefect and student of the year. While still in high school, she met Andrew Burbidge, son of the local minister, the love of her life; they married in 1969 and enjoyed 51 happy years together. They had three children: Anthony, who Mary persuaded Andrew to permanently foster; Jenny, who had a profound physical and intellectual disability; and Joanna.

At an early age, Mary decided to become a general practitioner, achieving many high grades and awards in her studies at the University of Melbourne. In 1972, she became the first resident medical officer at Williamstown Hospital, doing surgery, anaesthetics, delivering babies, casualty work and inpatient care before she moved to a general practice in Williamstown, where she worked part-time, serving the Williamstown community for the next 43 years.

When her children were small, Mary established a toy library at Outlets, a Neighbourhood House in Newport. She and some helpers ran the toy library one afternoon a week for years. Mary also ran parent effectiveness training courses at Outlets, joined its thriving netball competition and served as a member of the Outlets committee for more than 40 years.

In the late ’70s, the Williamstown Rotary Club decided to fund two residential homes for adults with an intellectual disability, to be built next to Williamstown railway station. Mary was invited to join the planning committee. The organisation grew from Urimbirra (two staffed units in Williamstown) into Gellibrand Support Services, a large and thriving community support organisation for people with disabilities in the western region, and Mary remained on the committee through all its vicissitudes and iterations, much of the time as president. It was her favourite committee because of its client welfare focus. Such was her love of, and commitment to, Gellibrand Support Services, that she bequeathed to them a beach house in Portarlington, to be available to residents and workers for relaxation and respite.

Mary was persuaded to stand as a Labor candidate for the south ward of Williamstown City Council in 1981 and served two terms. She did not think she was a very good councillor as public speaking was not her forte, but she did consider that she had made one really effective speech, which was at a hostile public meeting about a plan to keep the rates down by filling the quarries at Newport with garbage. 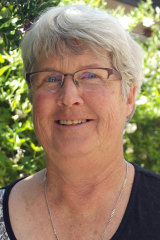 Mary had a vision of how the area could be, a tranquil haven with lakes and forest and wildlife, a treasure for future generations. She and fellow councillor Geraldine Schutt defied their colleagues and voted against the Labor caucus to defeat the garbage tip proposal, nearly getting themselves kicked out of the party for this heinous crime. They were successful in their proposal and Newport Lakes today is exactly as she imagined it. She loved the lakes so much that she sold her home in Williamstown and built a new house opposite the reserve. From her verandah, she was able to watch the birds through her binoculars and see people wandering around and enjoying themselves. She went on many birdwatching walks and continued to work with the Friends of Newport Lakes. This beautiful, peaceful place in the middle of suburbia is Mary’s legacy to the people of the local area.

In 1986, Mary started working with the Guardianship and Administration Board, established to legally protect the personal and financial affairs of people with disabilities. She enjoyed helping to set up the new organisation and working with a great team of fellow board members, specialist doctors, lawyers, social workers and community activists, making decisions to ensure the protection of vulnerable people.

After finishing up with the GAB, Mary became a senior lecturer at the newly established Developmental Disability Centres at Melbourne and Monash universities, where medical students were to be educated on the care of people with disabilities. Mary considered herself an uninspiring teacher, but the job also involved research, running clinics for people with developmental disabilities, and working with a bright, multidisciplinary team to develop teaching material, and she really enjoyed those aspects. Mary’s research passion became the development of patient-held medical records for people with disabilities and she spoke at international conferences about her research; however, the health records never became widely used – computer records won the day.

Mary was also a prolific writer, handwriting a diary every day since 1990, some of which was turned into a book, Jenny’s Story – a mother’s diary, published in 1996. In the early ’90s, Mary and two friends started the Williamstown Writers; this group is still going strong, with Mary and Helene Richards working together as co-ordinators until recently. The group published several anthologies and won some Fellowship of Australian Writers (FAW) Community Writing awards. Mary wrote articles that were published in various medical journals, and a book of her short stories, No Tomorrow and assorted yesterdays, was published in 2014. Her writing style was unique, revealing her warmth, her sometimes acerbic sense of humour and her acute observation of people and places.

After Jenny’s death and the publication of her book, Mary offered to sponsor (and judge) the Jenny Burbidge Short Story Award as part of the FAW annual awards. The submitted stories were to look at aspects of living with a disability and Mary enjoyed reading the entries each year. This award was taken on as part of the Williamstown Literary Festival in 2020.

Mary also started up street parties in Laverton Street in the 1980s and hosted Christmas carols around the piano every year. A lover of music, she taught herself to play the flute and gained a lot of pleasure from being involved in various choirs and musical productions over the years.

She and Andrew were contributing, well-loved members of St Stephens Uniting Church all their lives. They gave refuge in their home to refugees and other people in need of accommodation, and supported many charitable organisations, with Oxfam being a particular passion. For many years Mary supported Kenga, a child she met while on a bird-watching trip through Kenya, helping with the establishment of a school in the area and providing books and uniform for many of the local children.

As well as caring about others, Mary spent much of her life caring for her family. Her daughter Jenny required special care until her death at the age of 21. In his later years, her husband Andrew, suffered the devastating impact of post-polio syndrome, which meant he needed Mary’s help with every aspect of daily living. She also cared lovingly for both her mother and mother-in-law towards the end of their lives.

Despite Mary’s many achievements and accolades, she will be best remembered not for what she did, but for who she was. For her kind heart, her compassion, her generosity, not only with money but also time, her infectious laughter, her spirit, her acceptance of everyone and her loving nature. She will be greatly missed by all her family, but especially her daughter Joanna and her grandchildren Tiago, Eliza and Saskia.

Jo Burbidge is Mary Burbidge’s daughter and Helene Richards was a friend.