Alex Salmond ‘will refuse to appear’ at sexual harassment inquiry, claiming allegations that Nicola Sturgeon misled MSPs are being suppressed

There is ‘no chance’ Alex Salmond will give evidence to a inquiry into the Scottish Government’s handling of harassment complaints amid a censorship row, sources claim.

The former-First Minister says his allegations against successor Nicola Sturgeon are being censored.

He will refuse to provide witness testimony to the inquiry until his explosive dossier of accusations against Ms Sturgeon are made public, reports suggest.

The Holyrood committee is probing the Scottish Government’s botched handling of two harassment complaints against Mr Salmond in 2018.

A judicial review found the probe was unlawful and ‘tainted by apparent bias’, and Mr Salmond was awarded more than £500,000 of taxpayers’ money for legal fees.

There is ‘no chance’ Alex Salmond (centre) will give evidence to a inquiry into the Scottish Government’s handling of harassment complaints amid a censorship row, sources claim 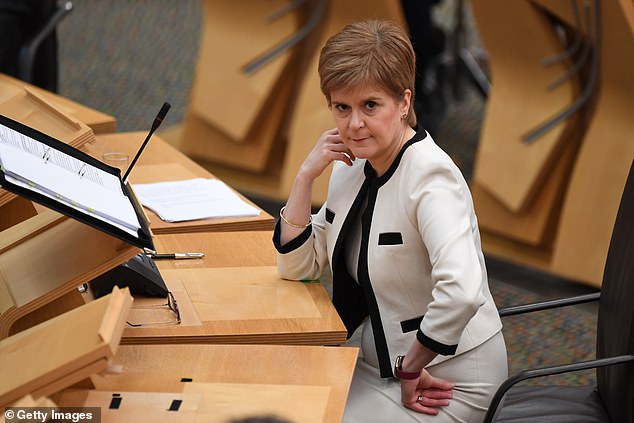 He was acquitted of 13 charges of sexual assault, including attempted rape, at the High Court in Edinburgh in March last year.

In an explosive dossier, Mr Salmond accused Ms Sturgeon of misleading parliament and breaking the ministerial code in her handling of the claims – claims she strongly refutes.

But the Holyrood inquiry have refused to publish the dossier, meaning it cannot be concidered in the inquiry’s final report nor can he reference it when testifying.

He said the decision not to publish it was ‘extraordinary’ and ‘farcical’ and his spokesman said the move made a ‘mockery’ of parliament’s commitment to openness.

Now, Mr Salmond is set to tell the Holyrood inquiry that he will only provide evidence if it backtracks on its decision not to publish the dossier, The Daily Telegraph reports.

His lawyers are believed to be writing a letter to the committee – set to arrive prior to their Monday meeting.

Mr Salmond has been warned by the Crown Office that if he presents this information or makes it public in any way, he could face criminal charges for contempt of court. 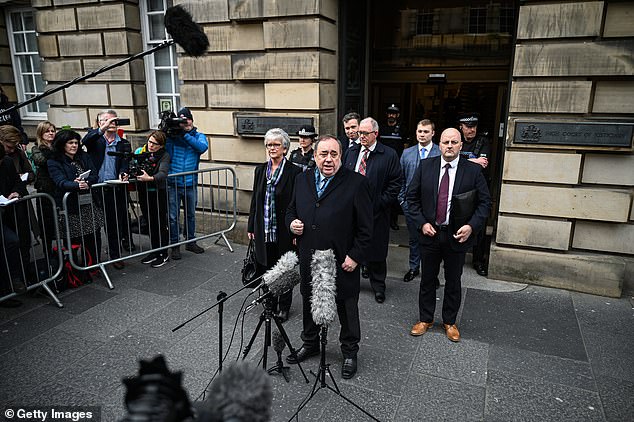 The submission was also sent to James Hamilton, QC, who is investigating whether Miss Sturgeon breached the ministerial code, and has been leaked to several media outlets, including the Scottish Daily Mail.

A spokesman for Mr Salmond, said: ‘It would be one thing to remove a sentence or so but to suppress the whole submission is simply farcical.

‘It means that it can’t even be considered for inclusion in the committee’s report.

‘In one letter, the convener seems to have wiped out the entire strand of her own committee’s inquiry into the ministerial code and dispatched the submission into a black hole. Alex will consult with his advisers tomorrow afternoon as to where this leaves his evidence and what to do now.

‘There is no possible justification whatsoever for this decision, which makes a mockery of the parliament’s commitment to openness and transparency.’

In his document, Mr Salmond accused Miss Sturgeon of making ‘simply untrue’ and ‘untenable’ claims about their meetings in 2018. 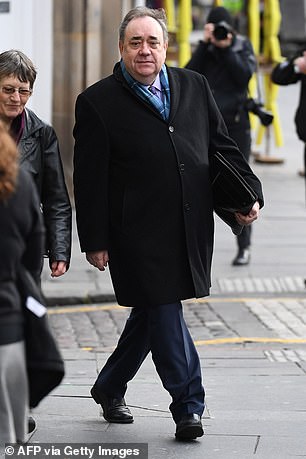 Mr Salmond (pictured) has been warned by the Crown Office that if he presents this information or makes it public in any way, he could face criminal charges for contempt of court

He claims the Scottish parliament has been ‘repeatedly misled’ about their meeting on April 2, 2018 – when Miss Sturgeon claims she first found out about the complaints against her predecessor.

The First Minister has admitted that she forgot about a meeting four days earlier with Mr Salmond’s former chief of staff, Geoff Aberdein, during which allegations may have been addressed.

Mr Salmond said that Mr Aberdein had explained the background to Miss Sturgeon on March 29, 2018, and that she knew the April meeting was government business rather than an SNP party matter.

Miss Sturgeon says no records were made of the meetings as they were not official business.

In his submission, Mr Salmond said: ‘The repeated representation to the parliament of the meeting on April 2, 2018, as being a ‘party’ meeting because it proceeded in ignorance of the complaints is false and manifestly untrue.’

But a spokesman for Miss Sturgeon has accused Mr Salmond of ‘seeking to malign the reputation of the First Minister’ and ‘spinning false conspiracy theories’.

It is understood Mr Salmond had hoped to present the submission during his oral evidence session.

A spokesman for the Scottish parliament said: ‘The committee has always been clear that the parliament cannot publish any information which does not comply with the legal obligations placed upon it.’